The last couple days Bromont has been breathing really badly when he gets hot running. He’s been breathing rather loudly over the whole winter, but he is turning 10 pretty soon, so I thought he was get getting older. But, the last week, it hasn’t been normal. So, I took a video of him breathing after walking and sent it off to Dr. Ken Harkin, the same veterinarian that took such good care of George. Ken emailed me back instantly and said that we should bring him in as soon as possible.

Even though Trudi only got back from The Tour of California late Monday, she got into the car and drove him over to Manhattan to see Ken. The surgeon looked at him and said that he most likely has laryngeal paralysis, but maybe laryngeal neoplasia. He needs his larynx to be scoped to see exactly what the issue is. Either way, he needs surgery to help alleviate some of the problem. He has to be at the Vet School for 4 days. She decided to bring him home and do the surgery next week. She has to go to Chattanooga for National Professional Road Championships this weekend, while I’m taking Bromont up to Quad Cities with me. She wanted to be around when he got released, which makes sense.

It has to be done. He can’t run or be in heat until it gets fixed.

Yesterday wasn’t that great a day for me. I felt okay, just though, riding on Monday. We did 2 couple hours at a pretty good clip the last 30 minutes. But, yesterday I was beat. I think it is allergies, but maybe it isn’t. I was allergic to 17 out of 45 things I was exposed to last Friday at the doctor’s office and most of those are extremely high in Kansas right now.

Anyway, yesterday it was pretty windy from the West. So I decided to ride the Landon Bike Trail out Southeast to stay sheltered some. It is an old rail trail that isn’t close to complete, pretty primitive in places. Anyway, the thunderstorms had blown a bunch of trees over the trail. I had to dismount and walk over two or three. I was heading out towards Berryton, wearing headphones listening to Pandora, when all of a sudden I’m falling off the back of my bike. A tree branch had gotten blown out of a tree and fell on me right when I was under it. It hit me right in the face. I must of just released my bars, because I just fell off the back of my bike and landed on my side/ass. I had no idea what happened for a second. I reached up and my glasses were gone and I felt a bump on my forehead. Then I saw the branch. It wasn’t that big, maybe 2 or 3 inches in diameter and 10 feet long.

I sat there for a little bit, did a little systems check and got going. Man, what are the changes of that happening? I remember Tejay getting hit by a limb or something last season in a stage race and I thought that was really odd too. So, that was the highlight of the ride. I got worse and worse all ride. My surgery shoulder started aching after an hour, so I just turned back and crawled home. It was the worst ride I’ve had this year. 16 mph average for 2 hours. Now my shoulder is aching more. I told my doctor, Stacie, that I never fall out training and now I’ve fallen twice in two weeks. Neither time it should have happened. Weird season so far.

We walked Bromont over to the Dairy Queen last night at 10 pm. He can walk on a leash, but not run free. It’s a couple miles each way. Bromont loves DQ vanilla cones. It’s his favorite treat. I eat the first half,maybe more, and he gets the whole cone full of ice cream. My legs were pretty done when I got back. I’ve been very on and off the last few days.
Pretty frustrating, but it is what it is.

I have to put a road bike together. I raced my Eriksen cross bike last weekend in Arkansas. My arm is working so badly, it takes a pretty long time to do the mechanical work. But, I need to do it. I guess that is the project for this afternoon. It is only mid-May, so it’s about time.

The video I sent to Ken. 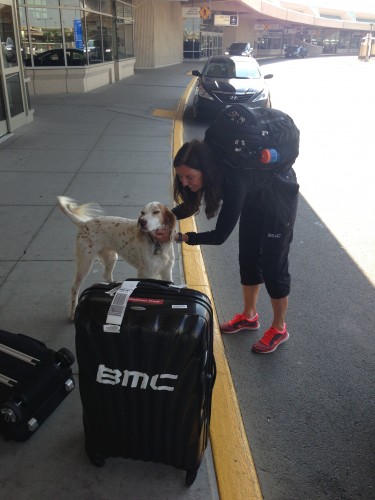 Trudi and Bromont at the airport Monday night. 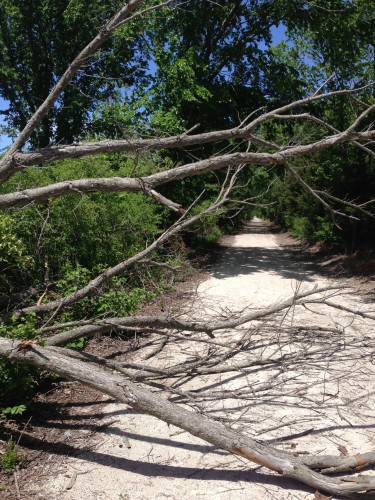 One of the trees down on the trail. I guess it was fortuitous that I didn’t get smashed by this one. 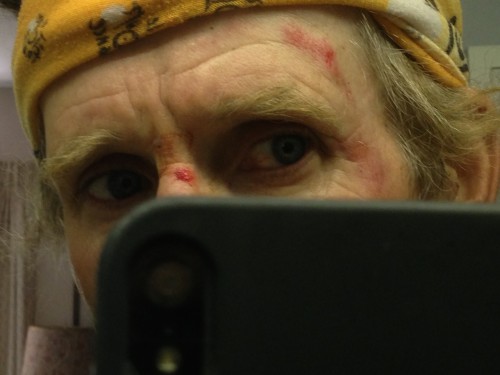 Face photo when I got home. 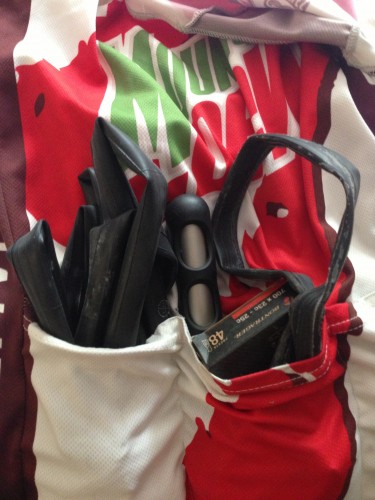 You know it’s a shitty ride when your jersey pockets look like this when you get home. Changing tubes is a real challenge with my right shoulder.