I got the okay to start riding early because I convinced my doctor, Stacie, that I never fall training. I think I’ve fallen training twice in the last 25 years. This is on the road only, of course. Anyway, yesterday I spent nearly the whole day putting a dog door in Ann’s porch. I got out late, rush hour here in Austin. Not a good time to ride. I wasn’t planning to riding much more than 1 1/2 hours. I’ve been feeling tired.

I did a weird route out 2222, which is super busy after 5, then turned onto City Park and headed into the residential area. My phone showed there was a way to cut back over to 2222, up by 620. I turned onto a road that said dead end. I was a little concerned because I didn’t really want to ride 3 miles out of my way to just turn around. It was sort of weird, right before a cul de sac, there was another dead end sign. It looked like a dead end, but one of the driveways looked wider. It was marked with an address, but had a stop sign exiting. I road in and it was a little super short cutoff to the road I was looking for. It’s the first time I encountered a secret road, with road markings anywhere. Kind of fun.

Anyway, I rushed back to go to dinner with Ann. When I got back I normally take Bromont for a mile loop around the neighborhood. But, it was busy and I thought maybe I shouldn’t, but Bromont kept bugging me, so I did. He ran pretty good, but coming back our normal way, there was a couple walking two dogs, so I headed back a street early. Bromont got mixed up and got behind me. He was running in the grass, but a couple cars were coming at us. I slowed down and moved to the left to make sure he was going to be okay. I was riding less than 5 mph, looking backwards and hit a pothole. I was only holding onto my bars with my right hand, my bars twisted and I got launched over the bars. I landed on my right side, hitting my knee and, of course, shoulder. I couldn’t believe it.

I don’t know if I hurt it. I definitely did something to it, but it could be the same as if I just fell without surgery. I slept badly and it aches again. I can’t believe it.

Our roads in the US suck. They incrementally got worse until they are what they are today. 20 years ago, we wouldn’t except roads like this, but it happened to slowly, we forget what they were like.

The weather has been pretty bad the whole time I’ve been gone, so it was a good trip for missing that. It’s spring, so it is raining about everywhere in the Midwest now. I like that.

I’m heading back to Kansas today. I have to drop Sue’s bike back off at her mother’s house in Richardson and then am heading North. It’s 10 hours, so I won’t be back until later tonight. 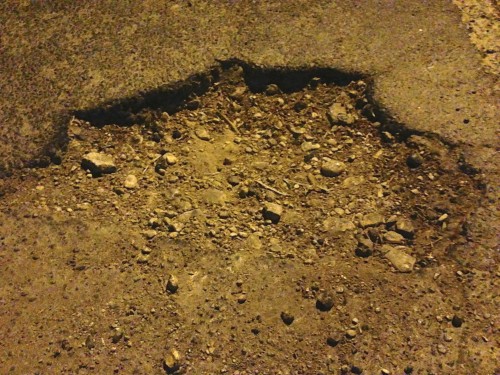 The culprit. It wasn’t all that deep, but I was going slow, looking back. 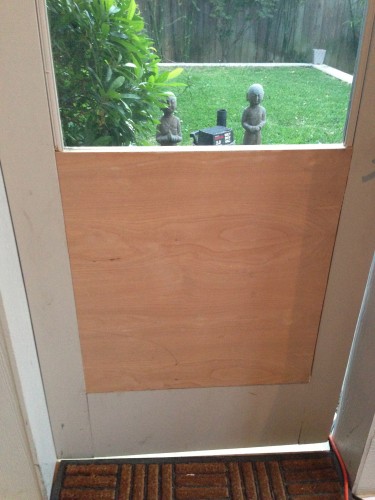 Start of the dog door project. 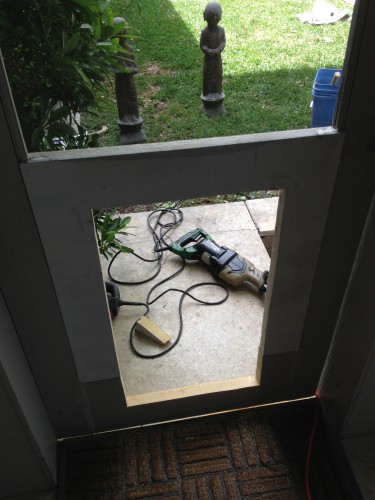 FInished on the inside. 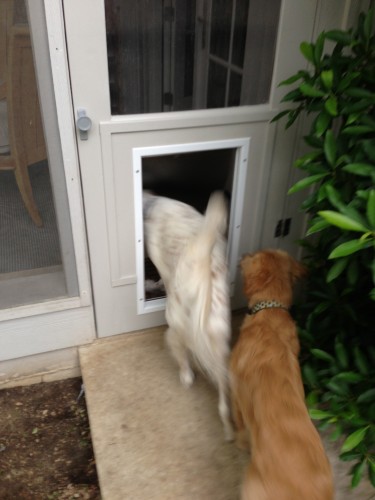 Curious guys checking it out. 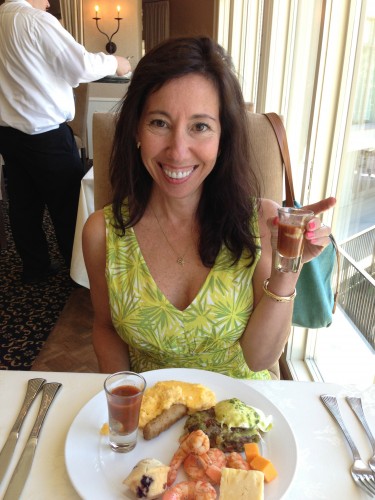 Ann, with a oyster shot, at Sunday brunch.