Before Bromont, we lived with a dog we called George. I say we lived with him because I don’t really think you own animals, I think they choose to live with you. You might not agree with me on that, it was really the case with George because he didn’t really need us for all that much. He was a free spirit.

George was what people call a once in a lifetime dog. I love Bromont to death, as I do all the pets, but George was super special. He was the smartest dog in the world.

George happened into my life one day when we were playing ice hockey over at Lake Shawnee in the winter. He was a super small puppy and tumbled onto the ice from the shore. He could barely run, but wouldn’t stop chasing the puck across the ice. He was fearless. We went over to the Park keepers house to see if it was their dog and the daughter said that no, there was a whole litter of puppies left there and they had been taken to the humane shelter. George must of escaped I guess.

Anyway, we took him home and that was it. He was wonderful. I could write stories here all day about him. The dog could remember every place he’d ever been in his life, even if he was there only once, years earlier.

He eventually got into the hearts of nearly everyone in the neighborhood. We didn’t have a fenced yard and George just wandered free. He started walking in the morning with a group of woman that got together every morning and did a long speed walk. There was an early group of women and then a later. He did both walks, so I never saw him much in the morning, he was busy.

At Christmas time, we would get tons of gifts left on the porch for George. Tons of dog treats, toys, one year a bottle of doggie champagne. George would get more Christmas cards than us.

One time when we were gone, Kris let George out at night. A storm rolled in and Kris went out to look for him. It was a big storm and Kris couldn’t find him. Then next morning, the phone rang and it was a person from the nursing home that my grandmother was staying at. She said there was a dog outside howling and a woman there said it was Mrs.Tilford’s grandson’s dog.

So Kris drove over there. It was 3 miles away and George had only been there once. When Kris pulled up, there was George, sitting underneath my grandmother’s window. He’d been there all night. At that time, we’d only taken him to the nursing home once before and that was from a different direction, not directly from our house. When Kris went in to talk to the nurses, a woman came up, all shaking and flustered and said she’d been telling the nurses all night that the dog was ours and they thought she was crazy. George spent a lot of time after that at the nursing home. The people there, most I’d never heard speak a word, would open up and talk about their dogs through their lifetimes and you could see on their faces how happy that the memory made them.

George was super fit too. He would run and run. He was nearly Forest Gump. He just loved to run. Honestly, he would run probably close to 20 miles a day, never less than 10. He would run whatever speed we went. If we were on our bikes, that was the speed. If we were roller blading or running, slower. He loved it.

When George was around 9, he got cancer. He had a lump on his chest that we had removed. Then another one came back in his mouth and we took him to the K-State vet hospital. I was waiting there and they announce my name over the loudspeaker. A guy working there, Ken Harkin, heard my name. He had went to vet school in Ames Iowa, where I spent a ton of time when I road for the Levis Team. He rode bikes and remembered me. Ken came out and introduced himself and took over George’s case.

Ken said that they would remove the tumor from George’s mouth, but it wasn’t good. He had tumors in his lungs and that the prognosis was bleak. We were devastated. A couple weeks later, Ken called me and said he’d been searching around and that there was an experimental study going on in Denver that might help George.

We called the lady there and got George enrolled. It was a gene therapy study that cost $1000 and we had to drive George out to Denver for one day a week for 10 weeks. It’s about 600 miles. So, we started doing that. Trudi did it the first couple times, then me. Finally we were both gone and Kris was driving him. He stopped to walk George and he wasn’t doing too good. He was coughing up bloodly stuff and was dazed. By the time George got to Denver, he could hardly walk. The woman that ran the study said that George had pneumonia and it was going to be super expensive to treat and that he would be kicked out of the study. Kris called and asked me what to do and I told him to drive him back to K-State. Kris drove over 100 mph and got back to Manhattan in 5 hours.

By the time he got there, George was better. The lack of oxygen in Denver wasn’t good for a small lung capacity. Ken said they would put him into a oxygen tent, give him antibiotics to fight the infection and that he would have to stay there a few days at least. Ken called a couple days later and said George could come home. But, it was better than that. They had taken a chest x-ray and all the tumors in George’s lung were gone. It was close to a miracle. It was so weird that George got kicked out of a study and they never knew that it “cured” him. I think he said that the stuff that George was coughing out of his mouth might of been dead tumors, but I might be wrong on that.

George was great for a long while. The cancer came back about 3 years later. He was 13 by then and gray. He slowed down, but never stopped running. We’d let him out of the car a block or two from our house and he would take off like he was a puppy, only going 1/10 the speed.

Finally, one Friday, I decided it was enough. George could barely walk and it seemed it was the right time. Kris begged me to wait until the weekend was over, that we’d have someone come over on Monday to put him to sleep. I agreed because I hated the thought. Anyway, George went downhill badly. By Sunday evening, there was something in his throat that had grown and he was gasping for air. We called every vet in town, left messages and no one was returning our calls. We didn’t have an all night vet hospital in Topeka at the time.

Finally, about 1 in the morning, I realized that no one was going to help. I came to the conclusion that I was going to have to help George out myself. We had an old hunting rifle from my grandfather. He raised hunting dogs and was an avid hunter himself. It was a .22 caliber rifle with a 4-10 shotgun barrel underneath. I think he called it a squirrel gun.

I took George out to the backyard on his favorite blanket. I sat there with him, more upset than I’d ever been in my life. I couldn’t believe that I had gotten to the point when I was going to have to do the most awful thing I could imagine. I would have given anything for the phone to ring and been told a vet was coming to do it. But no. So I just sat there and cried and cried.

Finally, I realized that it was my responsibility. It was strange trying to figure out a way that I could sit with George, with his head in my lap, and hold the gun and get my finger on the trigger. I was so worried about all the blood and also about shooting myself in the leg. George was breathing so badly and labored that it was crazy upsetting. His eyes were pleading with me to help him. Eventually I had figured out everything and said my final goodbye.

It took me forever to pull the trigger. I was so terrified. It was over in a split second. And it was exactly the opposite of what I had imagined. It was total quiet. Nothing. A complete peacefulness. No blood, just a small drop on the top of his head.

I sat there for a while and couldn’t believe how I felt. It was the biggest emotional change I’ve ever experienced. One second I was scared to death about doing something I would do anything to get out of and the next I am at ease with myself, nearly joyful for the moment. I thanked George for letting me experience the moment with him.

It was life changing for me. That experience made my life so much better. It changed the way I think. It’s hard to understand while it is happening how one moment in your life can change the rest of it. I would have given anything, and been so relieved, to have the phone ring and been able to avoid the ordeal, but it turned out to be maybe the most important moment of my life. It gave me strength to do tasks that I previously though were not attainable. It gave me pride. I have to give all the credit to George. Life is strange in that way.

We buried George up on the top of a hill where he used to play. It was the dead of summer and very hot. We carried him up there in his blanket. It was 2 or 3 am. I had a shovel, but realized very quickly that it wasn’t enough. The ground was so hard, it was impossible to dig. Trudi went home and got a pick-ax. It was cathartic digging the hole, sweating, getting bit by bugs. I imagined what the settlers did a century and a half ago when a loved one died. I know they didn’t dig very deep holes in the middle of the summer. That is why they covered the graves with rocks, because it is nearly impossible to dig a 6 foot hole that time of the year.

The closest I get to religion is when a pet dies. We sat up there and talked about what a nice place it was for George. I was creating some sort of Indian like spirit scenario where George has the run of the park and his spirit is eternal. I thanked George for being my friend and for helping me get through the whole experience.

I go over and visit George pretty often. I just ride by and say hi. Sometimes I just sit. It always makes me feel better. I wish, with all my soul, his spirit is running free through the fields and woods. 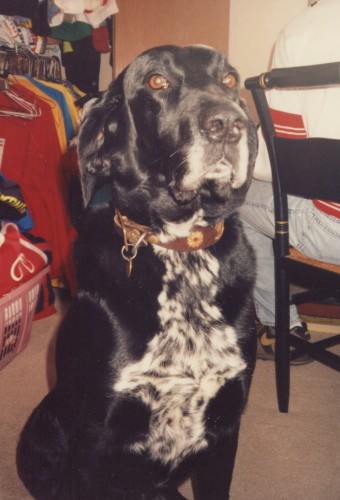 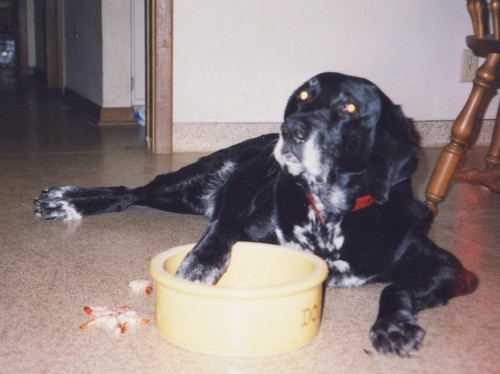 He wasn’t much into shrimp.