Flying back from San Diego was pretty good. I had a direct flight and that is always nice. The problem was, once again, the person sitting beside me couldn’t stay in their space.

I sat at the back of the plane and there was an empty middle seat right until the last minute, when a group of Muslim Clerics (like I know how to spot a Muslim Cleric) came on board. There were about 8 of them, mostly pretty big. I got super lucky when a very small fellow pointed to the empty seat beside me.

I was sitting at the window and right after the isle guy moved, this guy plops down in the middle seat and immediately, nearly aggressively, take over both of the arm rests. That kind of bugged me, but I was planning on sleeping the whole flight and was going to be leaning against the window, so that was fine. I was hoping to support my bad arm on the armrest some, but didn’t really worry much about it at the time.

But, nearly as soon as we took off, this guy’s arm keep getting further and further into my space. Pretty soon it was like 4 inches over. I was already crunched over pretty well, but it was nearly impossible not to touch. So, I decided to just move a few times slightly, just brushing up against the guy’s arm, hoping that he would realize he was in “my area”. Nope. Didn’t work. I tried it a couple more times with a little more pressure, but he didn’t budge.

The flight is a little over 3 hours and about 1/2 way my shoulder started hurting from being cramped up in the corner of my seat. There wasn’t a position that I could get into to relieve the pain. I’m not sure why I just didn’t ask the guy to try to keep all his body parts in his seat. I wouldn’t have worded it that way, but that is what I wanted. I think the reason was because it was so obvious that he was in my area and that it would be rude, after such a long time, to ask him to self contain.

Maybe it was a guy thing and the little guy wanted to show he was the alpha male or something. I’m not sure. And maybe I was more riled up because it was a man. If it would have been a woman, or let’s take it to the extreme, a fashion model, I maybe wouldn’t have be so pissed that she was in my area. I still would have been uncomfortable, but I don’t think I would have felt like my personal area had been so invaded.

It is sort of weird that there is only one armrest for two people to share. This guy wasn’t much of a sharer. It seems like there should be two armrests for each seat. It is probably just a space deal. It seems like that they are jamming more seats into each plane every time I fly.

Now that it’s over, it doesn’t matter much. It gave me a bunch to ponder over and really there was no harm done. Human interactions always entertain me. I don’t necessarily have to be in the situation, to find it interesting, but when I am, and don’t react as I think I might, it is interesting, entertaining, and somewhat amusing too. 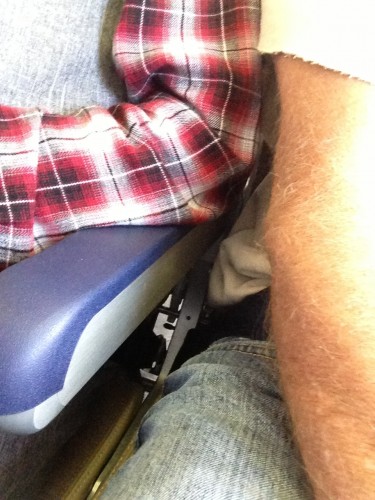 This is how it started and it keep getting further and further over on my side. 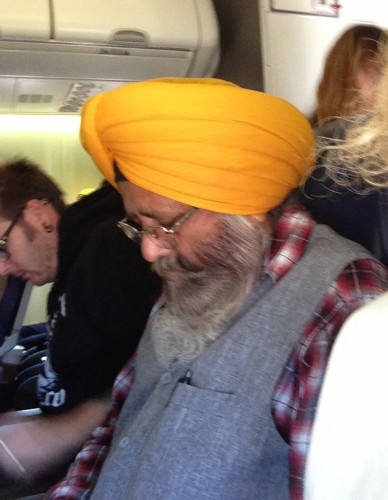 All these guys were dressed the same. Any ideas about what the deal is?