It’s been 4 weeks now since I had shoulder surgery. I knew it was going to be a slow and frustrating process, but never imagined how slow and frustrating. I’ve been hurt a ton in my lifetime. But I haven’t had much experience with soft tissue injuries. It has mainly been broken bones, separated shoulders and such. I’ve broken one or the other of my collarbones lots of times. But the sleeping aspect of this rotator cuff repair is terrible compared to a mere collarbone break.

I can’t really say that I’m not sleeping because of pain. Don’t get me wrong, it is painful sometimes. But the majority of the waking is mainly because I’m not comfortable. It’s sort of like a dull toothache. During the day, if there is stuff going on, it’s easy to ignore, but at night, when you’re just laying there, it is intense enough to be more than bothersome.

Adding misery is that I’ve been sick too most of the time. I think the reasons for that is twofold. One, since I’m sleeping so little, I’m run down. Plus, I’m out in public, at places that there are a lot of sick people, way more than I normally would be. I normally am not interacting with “regular” people that much in my daily life. But spending so much time doing physical therapy and other stuff exposes me to more bugs than I’d normally encounter on a daily basis. It seems like there are a lot of weird bugs going around Topeka this year and they all seem to like me.

I’m going to Louisville next week to have my friend Stacie look at my shoulder and give me some advise about a time frame of when I can start riding. I swore that I was not going to jump the gun on this whole deal, but I don’t even know who has the gun right now, let alone when they are thinking about pulling the trigger.

The guy I’m seeing at Rebound Physical Therapy, Burt, is great. He is super knowledgeable and encouraging. He got his degree in PT from the Mayo Clinic, so has a good base. He knows a ton about shoulders, which is good for me. I go three times a week. I haven’t walked over there since I got a stomach bug, but plan on starting up again.

I’m also going to start riding inside more. I’ve only ridden on the ergometer a few times the last 4 weeks. I did ride for an hour last night and didn’t feel too bad. I was pretty fit before this whole thing happened, so I seem to have okay steady state power. I’m sure my top end is gone. It is pretty difficult going hard riding when I can’t use my right arm at all. I’m not supposed to engage my shoulder muscles at all, which is more difficult than you might think. So, I’m not pushing it at this time.

It is supposed to be 70 degrees here in Topeka today and 80 degrees tomorrow. I’m going to hate it. Someone broke into our building a couple days ago and I had to get Bill to install a new door there yesterday. I observed that there were a bunch of new cats hanging there. Inside and out. So, I’m going to try to plug up the holes, so they stay out and start a new catch, spay, and release program. I didn’t realize that they multiply like rabbits until I got caught up in this. An average female cat can have more than 3 litters a year, averaging 4 to 6 kittens. You do the numbers, it is out of control.

I’m sure I’m going to get bitten, so then I’ll have to reference back to yesterdays post on antibiotics. I don’t have a spleen, so cat bites are a no-no. I’d better go locate the welders gloves. 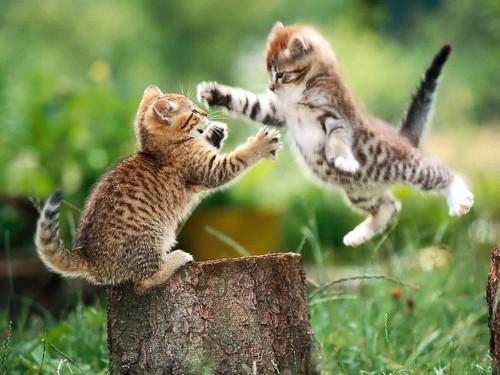 3 thoughts on “Twiddling my Thumbs”