Floyd Landis is going to be doing a panel, that supposedly he got together, to discuss doping in cycling. The panel is going to have Jonathan Vaughters, Garmin, Travis Tygart, USADA, and Thomas Murray, a professor and serves as the Chair of the Ethical Issues Review Panel for the World Anti-Doping Agency. This could be interesting. I haven’t seen a link, but I hope there is some live internet coverage of the event. It would nearly be worth the plane ticket to attend in person, just for entertainment sake.

The quote I agree with the most from the announcement is by Floyd. He says – “All I can talk about is what I know from when I was racing. For me it doesn’t appear that the risk and reward structure has changed. Nor has the management of cycling. There’s not a lot of reason, other than taking people at their word that anything has really changed. We’ve seen where ‘taking people at their word’ leads us.”

All these current riders that got their asses kicked by these guys that were doping keep telling us that was is the past and that isn’t the current generation of riders now. But many, if not most of the guys winning the races currently are from this past generation, so the statements seem illogical at best and most likely just outright fabrication.

Unless some outside source, governing body get into the mix, us, as a sport, are not going to be able to solve this problem. I’ve been writing it here for years, the sanctions have to be super severe. I used the word draconian once to describe how severe. The punishment has to be more severe than the offense. And, personally, I think the offenses are serious on their own merit, so the punishments need to be almost ridiculously severe.

I think that it is interesting that the only way that riders tend to fess up is when they are subpoenaed and have to testify under oath. Athletes don’t like the idea of serving jail time. I doubt that the societies of most modern countries want to throw their idols/athletes, into jail for breaking the rules of sport. But, the harm to and interest of, society is not small. The stakes are very high in many of these sports. The amount of money changing hands, even in cycling is enormous to the average guy. There needs to be a way to “convince” the participates that doping isn’t a viable alternative. I think more legal options need to be considered when addressing the sanctioning of the offenders. Civilly and criminally.

I don’t think that Floyd has an agenda right now. He is just sitting around, maybe trying to race some Nascar, twiddling his fingers while this whistler blower law suit runs its course. He is potentially in line for over 10 million dollars, depending on how the thing plays out. That would very much surprise me if that is the case, but you never know in this day and age.

Anyway, this forum might be interesting, depending how forthcoming all the participates can be. It’s on Thursday at Yale if your nearby. 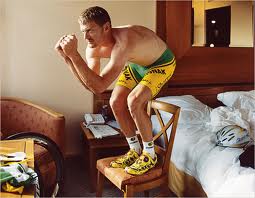 I thought this was an interesting picture of Floyd. I’m not sure if the photographer just asked Floyd to pose in this position on a chair or what, but it is very unusual.

17 thoughts on “Floyd and Company holding Discussion at Yale”