Man, according to this article over at Cyclingnews.com, Cipollini used 25 bags of blood in 2002, before the Giro. Holy shit, that is a lot of needle pricks. Needles to remove the blood, needles to put it back in. The number is beyond crazy. That is something like a bag a week.

I sort of understand the whole idea of blood transfusions. I don’t understand how you could remove 25 units and then put them back, in such a short amount of time. Where is the time left for your body to regenerate its own red cells so you can reap the benefits of the process?

Cipo’s argument that the name “Maria” was not him was rebutted by the newspaper quite well. The phone number they used to contact him was the same number that was connected to the doping evidence. That is pretty hard to explain.

It must of been super stressful doing all this just to race bikes. All the worry. Every time he felt a little weird he’d have to wonder if he got a bad bag of blood. I don’t get it. Well, I sort of get it, but I do have some sympathy for all these guys in this regard.

The shit is just going to keep flowing. Rasmussen’s revelations haven’t even been made public yet. Man, don’t we have a lot to look forward to? 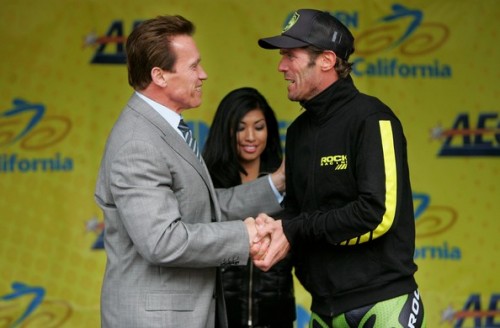 Arnold and Cipo hanging at the Tour of California.