By now a lot of you have seen a photo of Peter Webber’s cross bike from last Friday at Cylcocross Worlds. If not, here it is. 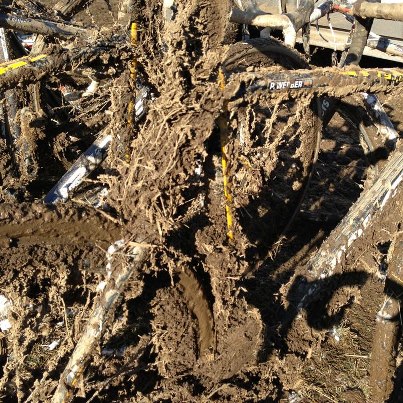 I was going to rant about this on Saturday, but I thought it might be better to let it sit a few days. I’m not sure that helped.

I was working the pits on Friday for two races. Actually, I should start at the beginning. Thursday morning, 7:45 early, I went to the course and pre-rode the course on my b bike. I went back to the hotel and left my bike with Bill and Trudi to have cleaned. I came back to the course about 9:15, expecting to ride my b bike, only to find that it was still as dirty, actually worse, since it was frozen, as it was when I left it. The power washers weren’t functioning. They’d left them out and the had froze.

Right before the start of my race, they got at least one of them started and up and running. The course was of the condition that it would be impossible to try to ride the same bicycle more than a couple laps. That night, Thursday, after my race, we drove by the course around 10pm. I remember commenting in my van that I’d bet anyone a million dollars that they left the power washers out once again.

Sorry to say, I was right. We didn’t learn this until after noon on Friday. Brian, Bill and I went over to the course to check it out and after only 1/2 a lap our bikes were completely clogged with mud, grass, etc., plus it was freezing on as it hit the frame. Bill’s race was in less than an hour and we headed back to the hotel to use a hose there. It took me a good 30 minutes to get the stuff off of Bill’s bike. Mainly because the hose was in the shade and the water was freezing back as soon as it hit the frame. The temperature was in the mid teens.

So I knew back at the course it was going to be carnage. I didn’t or couldn’t imagine how much though. We had a 5 gallon bucket of hot water, plus a few gallons of windshield washer fluid. That was hardly close to enough. The bikes were coming in worse and worse as the day progressed. I was handing Bill back bikes that were bikes that he should have been giving me to be cleaned. The amount of destroyed equipment was unbelievable. Dozens of broken derailleur hangers. Sometimes frames. Chains, wheels, you name it, it was broken.

All because the promoters of the event couldn’t make sure there were power washers working. It is inexcusable. It was the World Championships, the course conditions were worse than almost any bike race I’ve ever been to, and there is no way to spray the bikes.

No one seemed to take charge. I could have just drove to Home Depot and rented 5 power washers and put them in my van. No one from the promotional end seemed to give a shit.

Many a race was decided by this issue. Whoever had driven to the event and had planned to have a full pit, most likely had a bucket and the tools needed to just barely maintain. But, riders that had flown to Louisville, were most likely SOL.

And that was the deal. There wasn’t a rider at the races on Friday that wasn’t affected by the lack of power washers. I have no idea how the 40-44 men’s race would have been different, but the riders at the front of the race were having completely different experiences because of this fiasco. The Spanish guy that was winning, broke his derailleur hanger off. Pete Webber, who was riding in the front, broke his. Mark Savery was getting super clean bikes back from Tom Price, charged all the way to the front and won the event by a large margin. Mark and Tom had planned from this, but you can’t blame a guy that flew over from Spain, not to be prepared. It is a joke.

I ran into Sean Petty, from USAC, after the Elite Worlds and he was giddy, as was I, about the day. I nearly turned to speak my mind about the disaster at the venue down the road, the day before, but held my tongue. The Elite Worlds eclipsed the Master’s event with support. I understand the issue of having to move the Elite race up a day, but I was told that the two venues had completely separate staff. But, there is no excuse for a break down so huge that every single rider in the event was affected by the situation.

I went to the self service car wash after the races and spent over $20 to get 4 bikes and a couple sets of wheels marginally clean. Bill Elliston told me later than night, he went to a car wash, swiped his credit car, and $110 later, he had cleaned his equipment. He must of been freezing by then.

I really don’t understand how this could have happened. I have to assume that the power washers that were left out all night were destroyed. I also have to assume that they were just rented, so someone is out a big chunk of money. These weren’t your garage variety power washers, they were industrial. And all someone had to do was either go and run RV antifreeze through them the night before or better yet, pick them up and take them inside. You didn’t see this problem in Kansas City, Bend or Madison the previous Nationals. And all these races, it was below freezing.

I’d love to hear an explanation or “excuse” from anyone from the organization for this whole mess. Please, someone try your best to explain.

USAC should refund the entry fees of all the riders that raced on Friday and send each and everyone of the riders an apology letter, along with a free entry to next years National Championships in Boulder. And this still would not come close to making up or being square with the situation. World Championships were decided by the promoter’s failure to do their job. It is inexcusable. 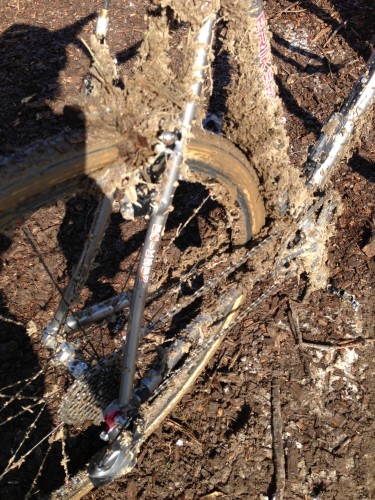 My bike after 1/2 a lap riding on Friday. 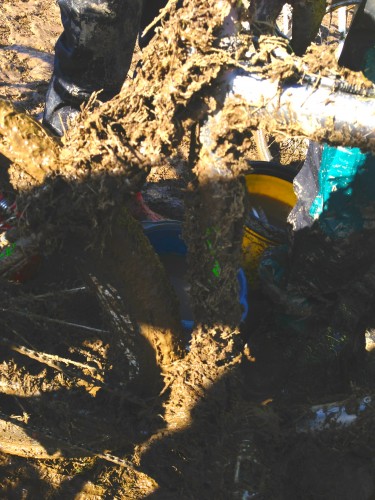 Brian’s brand new Eriksen after the same 1/2 a lap racing on Friday. 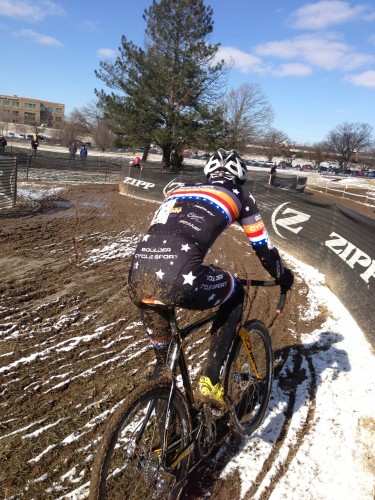 Pete Webber leaving the pit when he still had a bike that he could pedal at a reasonable speed. 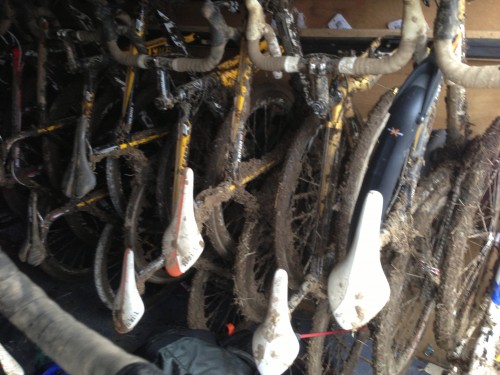 The trailer headed back to Colorado with 65 destroyed cross bikes.