Actually, race day isn’t for 15 minutes, since this is the night before the race. I race at 9:45 am, which is totally against my personal liking. I hate getting wet and cold early in the morning. I can’t see a way to avoid that this time. It is forecast to be 28 degrees and the wind blowing at 20 mph at 9 am. That isn’t something that you’d want to add water to, but like I said before, it’s unavoidable.

I can hardly wait for this race to be over. I’m not sure why. Probably because I’ve been having so many “issues” the last couple weeks and I feel like I am close to an edge, ready to teeter one way or another. I’m pretty sick of doing all these system checks continually. I’m just ready to do it and be done with it. Anyway, it will be over by the time most of you have read this.

It is pretty strange to say it now, but I don’t really know the course. I haven’t ridden the course since the remarked the course yesterday after the storm blew everything away. They took a couple “technical” sections out, but it really doesn’t matter. The whole race is going to be who can pedal their bike the fastest. Most of the skill sets for cross can just be thrown out the window here. It’s nobodies fault, it was just the weather that dictated this.

I’m going to ride a lap at 8 am and see how wet I’m going to get. Then I’m going to try to dress appropriately. I’m not one to want to ever over dress for a cyclocross race. This is going to be pure wattage, so a lot of heat is going to be produced. But, being soaked down to the core about 100 meters from the start, that changes it up big time. I have neoprene gloves that I’m going to put some chemical warmers in. If I can keep my hands warm for the whole race, that will be a minor miracle.

Okay, I need to go to sleep. I plan to ride fast, but I really never know. I wouldn’t throw my chip back if I had the opportunity, so that is a good sign. It’s just a bike race. 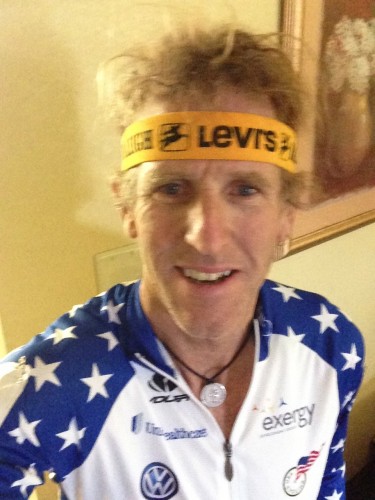 I wore a NOS Levis/Raleigh headband in the qualifying race for good luck. 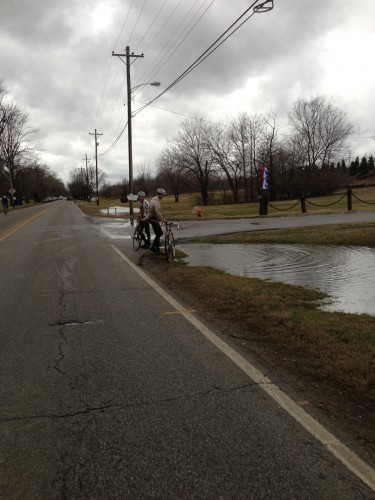 Riding over to the course yesterday, I saw these guys wearing German Nationals Team kits, washing their bikes in the flooded ditch. 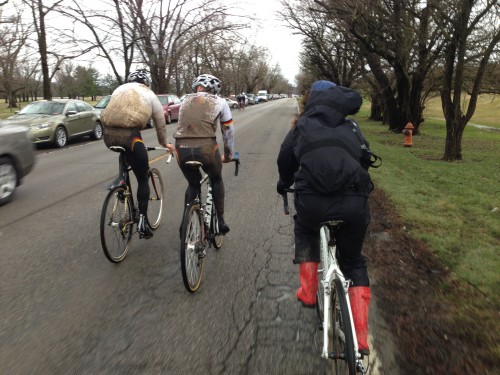 Then they rode by us. Trudi is here with her red rubber boots. 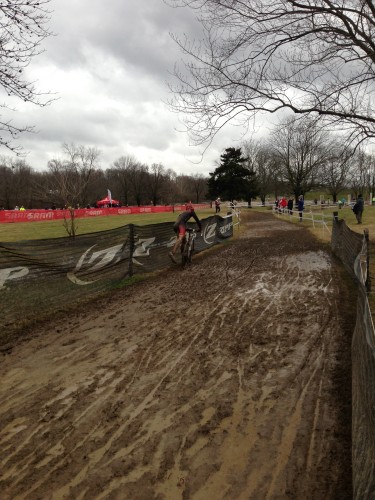 This is a Spanish guy that finished 2nd, to Peter Weber in the 40-44 qualifying race. He mounted by putting his left foot on the pedal and then throwing his leg over the seat like a horse. I don’t see how that would work very well on Friday on the ice. 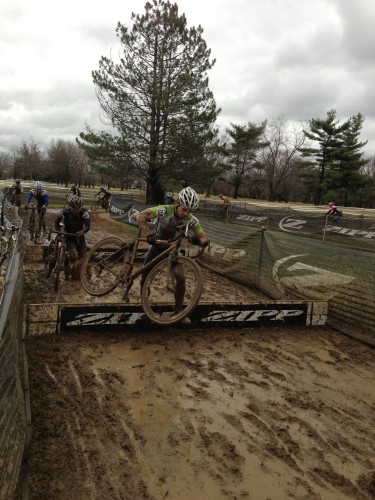 Bill, barely clearing the 2nd barrier. He said that the 2 laps he raced was the hardest thing he could remember doing recently. 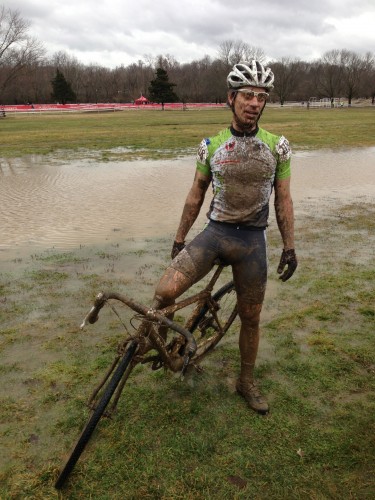 Bill pretty wet after the race. He finished 13th after starting the last guy. 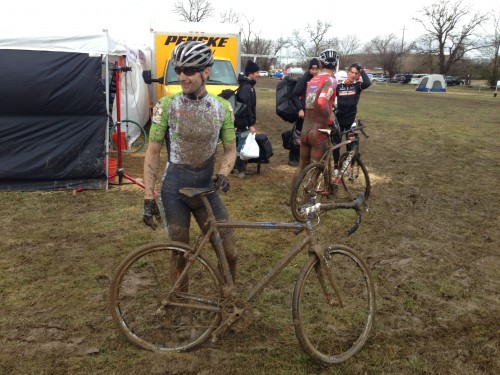 Brian finished 6th in his qualifying race, after having some grass-in-the-cogs issue. I don’t think he wants it to freeze up tonight.