I’ve been coming to Louisville to race bikes for a long time now. The first time I raced here was back in 1978. I was a junior and came to do a Junior Olympic Developement Race at The Kentucky Derby of Cycling. I didn’t have a car, so I had to wait until late on Friday evening for my friend, Ed Bauman, to get off work, and we drove all night to Frankfurt, Kentucky, getting there just a couple hours before the start of the race. I didn’t sleep all night. The race was a point to point, 100 km race, from Frankfurt to Louisville.

It is one of the most memorable races I’ve done. Back in the 70’s there were huge fields at races. The junior field was probably over 80 riders. We started the third group. First the 1/2 riders started, and there were 150 of them, then the Cat. 3s, another 150 and then us. About 8 miles down the road, we had caught the 3’s and then rode right into the 1/2 field. So there were 400 riders cruising down the road.

Supposedly the were enforcing the centerline rule. I had never been in a field of anywhere near that many guys. Maybe still haven’t since. Anyway, I looked up front, 100 riders up, and I see a stars and stripes jersey that I knew was Wayne Stetina, but I could also see Jeff Bradley, in his Kretschmer Wheat Germ Jersey. I thought, shit, I missed that. But right then, Greg Demgen, Jeff’s team mate from Kretschmer Wheat Germ, my team the next season, jumped across the centerline and shot up the left side of the road. I got on his wheel as we blew by the front of the 1/2 field.

There were about 12 guys riding in single paceline a couple hundred meters ahead. Greg was much stronger than me then and pretty much towed me right up to the back of the break. It was the who’s who of US racing. Wayne and Dale Stetina were there. Alan Kingsbury and Marc Thompson, I believe. (Four guys that were on the Olympic Cycoing Team in 1976.) Right when Greg and I latched onto the back of the line, Dale was playing gate keeper and sat up and took us off the back and then jumped back up. I was hurt, but pulled Greg back up and made sure we slotted in front of Dale.

Pretty soon we were riding double echelon, going so fast. It was completely opposite of a junior race. Jeff, Greg and I only had junior gears, 93 inches or so, so we were spinning like crazy. You only had to be at the front for a few seconds and then rotate back. It was so easy and we were going so fast.

Towards the end of the race there was a small hill. I only had a single chainring on my bike, I rode a 45 X 13. Going up the hill, I dropped my chain. It took me a little while to get the chain back on and I barely made it back to the group. During the time I was chasing, Wayne Stetina had attacked and had both Greg and Jeff with him. I was completely bummed, knowing that I had just finished 3rd out of 3. But, in reality, I was stoked to be where I was.

The finish was in downtown Louisville. Super wide open, 4 lane rode. Wayne had thought he had handily beaten the junior, had one arm in the arm as Jeff blew by him, his arm in the air too. I don’t remember how I finished in the sprint for 4th. I’d like to say I won the sprint, but am pretty sure I was buried. Dale told me after the race if that Greg and I weren’t juniors, he never would have let us get onto the back of the break. (I’m not sure how he could have stopped it though.)

That was truly my coming out in cycling. It was the best result I’d had, by far, and I learned I could ride with the best riders in the country.

The next year, I was a first year senior and I came back and raced in Cherokee Park. I made the move, this time with Wayne Stetina and his little brother Joel, plus a few other great riders. It came down to a sprint up the finish hill and I had thought I’d won until about 30 meters from the finish, this little guy that was sitting on the break most of the day, blew by me. I was stoked to finish 2nd. Long story short, the little guy turned out to be Hugh Walton, zillion time National Track Champion from Canada. Hugh and I went on to race together on the same team for a few years and become good friends. I have a hard time believing I could finish 2nd to someone in such a big race and not know who the rider was. I was soooo green.

Anyway, back in Louisville, 35 years later. The city has obviously treated me pretty well. Today I race a qualifying race at noon. It rained all day yesterday, so is going to be messy. The race is just 3 laps. It doesn’t matter really, I line up first on Thursday if I finish. It’s a good way to get the course down. 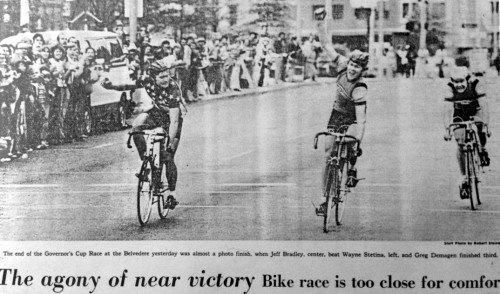 Sorry Wayne, not one of your best photos. But, it was a cool finish.

7 thoughts on “4 Decades of Racing in Louisville”