I went to an Oprah/Lance party over at the Walberg’s last night, but will wait until the next episode is over before giving my take. I’d already written this, so this is what you get. I have a PT appointment in Lawrence this morning. I’m trying to decide whether to ride over there in the cold or drive and then ride in the afternoon when it is supposed to be nearly 50. Okay, back on topic.

I’ve been racing bicycles for a very, very long time now. I started when I was 14 and am now 52, shit. I don’t have many regrets. I do it for many reasons, but mainly for the journey.

I got an email from Wayne Stetina, Shimano, about an issue I am having with some parts. At the end of the email he said, “How can you still race after tearing whatever was left holding shoulder together? Shoulder brace? You seem determined to create maximum permanent damage.”

I hadn’t really considered this much, but in my defense, I did ask the doctor what would happen to my shoulder if I fell hard on it. He said that I’d already torn the tendons completely through, so I couldn’t hurt it anymore. At least that is what I thought I heard. Maybe it is just what I wanted to hear. Either way, I’m planning on racing in two weeks in Louisville.

I have to say it is for selfish reasons that I’m doing this. It’s not about the jersey or racing in front of all the friends that will be there. It is because I had such a crappy season this year and was questioning my motivation for persevering through it. Then all of a sudden, a couple weeks ago, I can ride my bike again, and ride it fast. During the UCI race in Chicago, if I would have done just a couple things differently, and this stupid no UCI point rule wasn’t in place, I could have easily finished in the top 5 in the event. And that form carried on over to Madison.

Watching the Pro men ride around in Madison was super hard for me. The course was perfect for my riding style. The climbs were rock hard and you could stand the entire way. The corners were tricky, it was just perfect. I’m pretty good clearing my pedals, but that was definitely an issue that could have thrown a wrench into it. But, I like those challenges. And there I was watching.

I was there watching because I threw myself on the ground in a Master’s race that I really didn’t care about. I started racing the Master’s races at the Nationals a while ago. I first started because it gave me a chance to race the course a couple days before the Elite race. I was apprehensive about doing it, thinking it was beneath me, but a lot of “Pros”, that were finishing very high in the Elite races were already competing in their respective age groups, so I thought, “Why not.” The weird thing is that nearly every time I’ve raced the Master’s race in all the different cities, the last 10 years, there has never be a day where the course was similar for my Master’s event to the course on Sunday for the Elite event. I think that is strange.

I was talking to Eric Tonkin at the after race party in Madison. He had a pretty good ride. And he had problems. He started way back, like he was lining up 20 places behind me and I think I was supposed to line up in the 70’s. Anyway, he said that a lot of guys were trying to talk him into going to Louisville to race. He has no UCI points and can do it. But, he was apprehensive, saying that he still thought of himself as an Elite rider and he was kind of embarrassed to go and race the Master’s Worlds. I tried to convince him that he was wrong, that racing bikes is racing bikes. And that the Master’s Worlds might not be here ever again and there is no “shame” in competing. I was telling this, knowing I’d gone through the same quandary many times, first in MTB racing and then cross and still had some doubts myself.

I’d watched Eric race that day and questioned him about his race. Like I said before, he started at the very back, rode up to into the top 20, had some cleat issues, rode into the pit, made a stop and go since his pit crew was dealing with someone else, lost a ton of slots, back into the 30’s and he finished up 20th. The whole time talking to him I was wondering, “How would I have done?” I felt a robbed of an opportunity.

Anyway, I would rather go to Louisville and get beat than to have a bunch of regret not using the skill set I have to try to win the race. I guess the answer is that I try to avoid regrets in my life. I know that it might not be pretty, but I think that I have the experiences to be able to evolve to ride my bike fast, even missing use of some of my right shoulder. I guess it’s just another part of the journey. 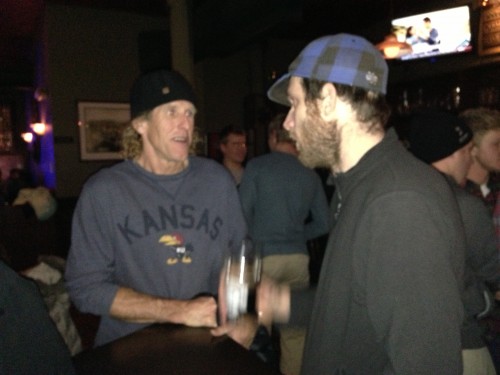 Talking to Eric at the post Cross Natz party. 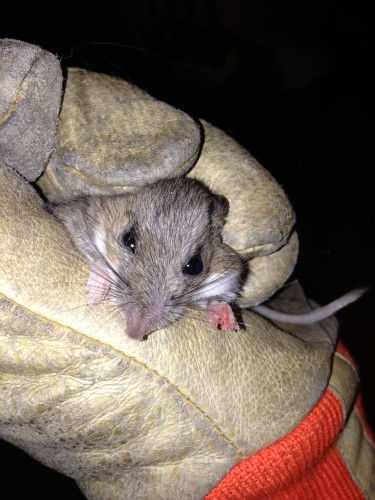 This is a mouse that one of my cats brought in last night from the cold. It was a catch and release program. They are more interested in the catch than the eating it seems.

9 thoughts on “A Cyclist Life/Journey”