Yesterday went pretty well right until I got to the course and started pre-riding. We got up to Madison in less than an hour from Delavan, checked into the hotel early, got dressed and rode over to the course.

I was mildly surprised that the course was completely ridable, even though it was above freezing. I ran into Jared Nieters when I got there and he said had done 6 laps on his single speed and it was good. And it was. No matter what happens, I don’t think that the ground is going to thaw. I don’t think that it could possibly turn into the quagmire it became last year before it froze. That being said, it is going to get a lot slicker. There is still a fair amount of snow on the course and I think that is going to be completely gone in the next couple days. So, it’s going to be slick mud on top of frozen tundra. That isn’t a bad base for a cross course. That is until Sunday, when it is supposed to freeze super hard Saturday night and then not get above 22 degrees all day. Then it becomes a skating rink. Probably with ruts. But, you never know, it is weather, which is fickle, and cross, which is the same.

I fell pretty hard on one of the descents about a 1/2 lap into riding. I whacked my left knee onto my bars and tweeked myself in a few other places. I rode 6 laps total, mainly to get used to the bike handling, but also to get a workout. I got a lot better handling my bike on in the rutted snow, but I don’t think I’m going to be dealing with any of that later this week.

I got back to the hotel and noticed that my dropout was bent. I was in a mild panic because I knew that they are very brittle and didn’t remember if I had another dropout with me. I did bring an extra, so I decided to try to straighten mine. That lasted about 5 seconds because it snapped off nearly as I screwed the tool into the threads. The problem was there are super small allen key bolts, maybe 2.5mm or such, and they strip so easily. I got one out, but the other stripped. I don’t have a Dremel tool or drill with me, so I just grabbed the dropout with some vice-grips and got a gap behind it and inserted a screw driver. Then I snapped it off. So, minor disaster averted.

By the time I was done messing with my bike, my left knee was all swollen up and I couldn’t bend it. I got a bag of ice and put it on for 20 minutes. I limped around the rest of the night. Then, after dinner, I made some Zen tea and right after I’d poured the boiling water into the cup, I sat down and spilled the complete cup into my lap. Man, was there some excitement there. I don’t think I am like that old woman at McDonalds, a long while ago, but there is some damage to my inner thighs. We’ll see how that progresses. Right now it is better than I would have guessed. But, my knee isn’t any better this morning. More ice I guess.

So, hopefully I got all my klutzy stuff for the rest of the week over yesterday. I’m going over to the course again today and maybe just riding a couple laps. The single speed race is later in the afternoon, so I’ll probably head over there then to ride and then watch the races some. It’s a good course for a single speed under these conditions.

Okay, here are some pictures of the course from yesterday afternoon. 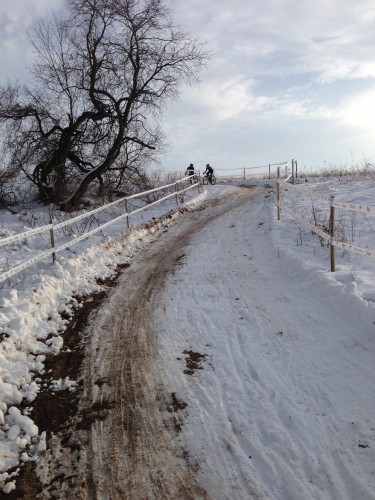 This is the first climb after the start. 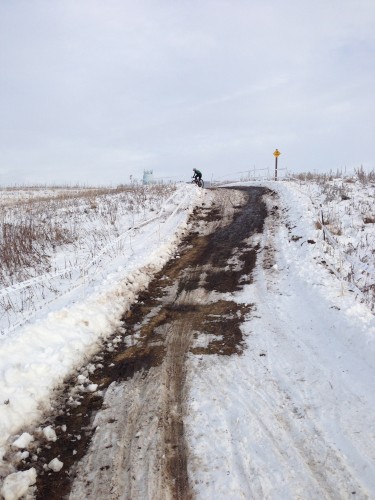 This is the last climb after the sand pits before descending to the road to finish. 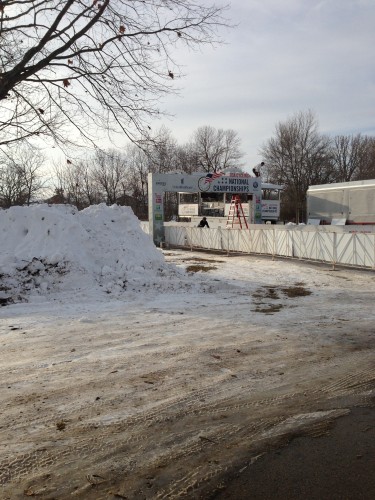 Looking towards the start/finish line. 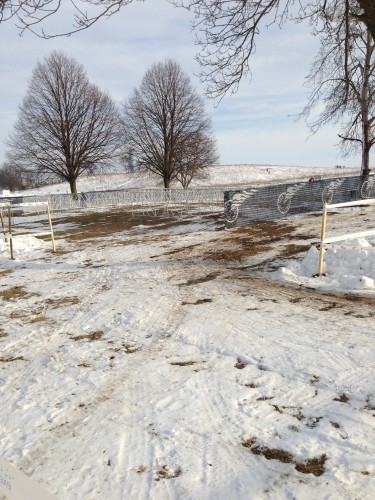 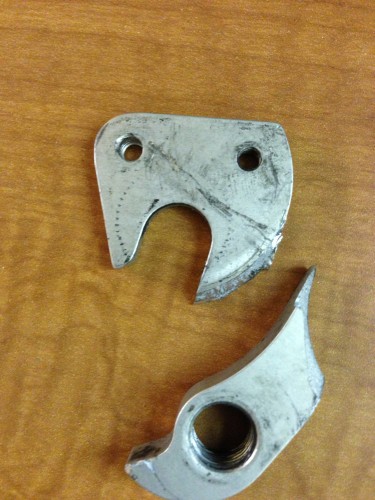 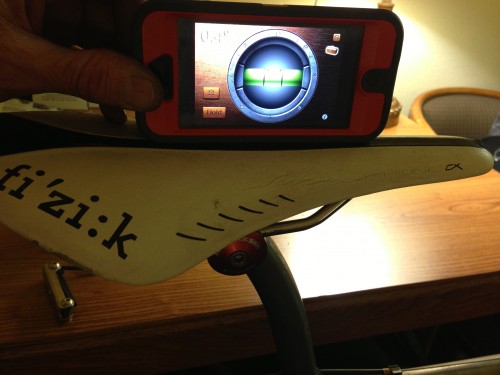 I was trying to level my seat and Trudi gave me her iphone. She has an app installed that is a level. It wasn’t really long enough, but it was kind of fun anyway. 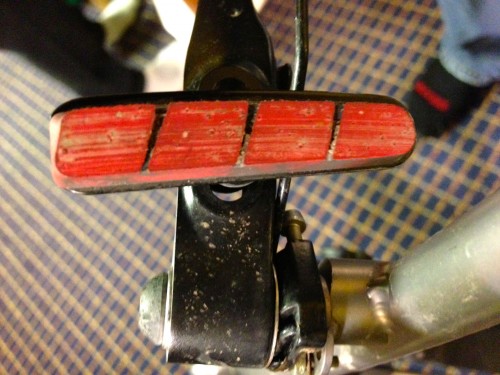 There is something in the soil here that is getting embedded into my brake pads. Some rock. It does a number on carbon rims. 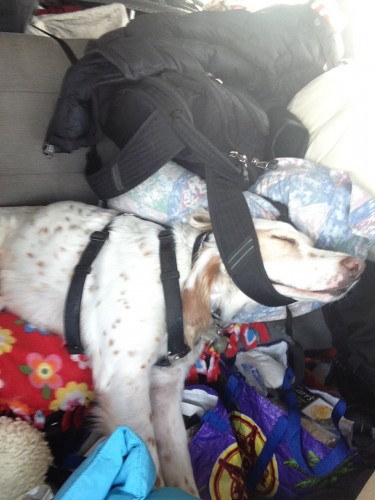 Bromont was pretty tired on the drive over and found the strap on my backpack to use to hold his head up.