Velonews published an article last night that said that someone from the NY Times said that Lance is considering coming clean, supposedly so he can be suspended for a shorter period, than life, and resume competing in endurance sports.

I don’t know what to think about the whole thing. The article quotes Jonathan Vaughters as saying that it would do a great deal of healing for the sport. I don’t really understand that. All it would do would be make all the people that say Lance didn’t do it start saying, “Who cares if he did it or not?” I think the whole thing seems really bizarre. I can understand the attraction of a lesser penalty, I understand the “tug” of competition, but admitting that you’ve been a lying sack of shit, and I’m not using that term lightly, for close to two decades, is a pretty big pill to swallow just to be able to do some athletic competitions a couple years down the road.

Honestly, I’d say that a lifetime ban suits his rule breaking episode. The guy supposedly took drugs to win 7 Tour de Frances, a World Championship, and a even a few domestic events. He amassed a net wealth of reportedly 125 million dollars. Plus, he sued people, calling ex-team mates liars (this is what really irks me), and making them pay him money, when in fact it was the other way around. Why should he get to compete in athletics with all of us? Sorry, it’s a privilege, not a right, and he abused that privilege to such an extent, in my opinion, he should lose it. I don’t think admitting to the crime should allow him any special exemption. Plus, he abandoning his wing man, Johan. Why not go down with the ship?

But, I’m sure Travis Tygart, USADA, and David Howman, WADA, will love to work a deal with Lance so they are proven “right”, that the system is just, and this wasn’t just a witch hunt. Whatever, maybe I’ll still be around when Lance comes back and we can “compete” against each other again. Leadville 100, 2015?

I spent way too much time yesterday standing around getting ready to go today, like all day. It’s less than 10 hours up to Chicago, so it’s not that bad. I’m going to be a little stale for the UCI race on Sunday, but I’m stale anyway, so a little extra staleness will probably not hurt.

I think it’s going to be energy zapping spending nearly a week in Madison. It’s going to be so messy I can’t see it being anything but that. I’m trying to go fast in nearly a month, not this week, so I’m not so stressed. Last year, there was less than a week between Nationals and Worlds, so it was a different situation.

Okay, I’d better pack up the van and get on the road. I like the drive. 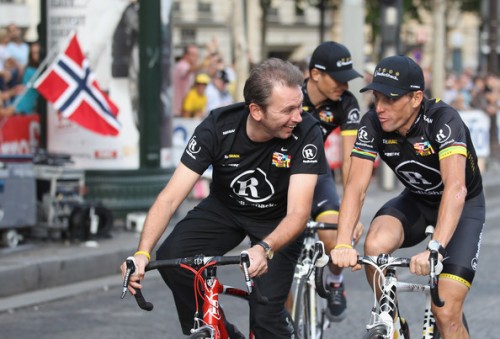 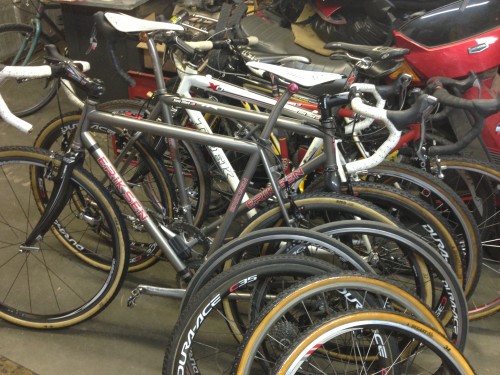 I am bringing 3 bikes, just in case, plus Catherine’s two bikes, plus spare wheels, which equals a lot of stuff. 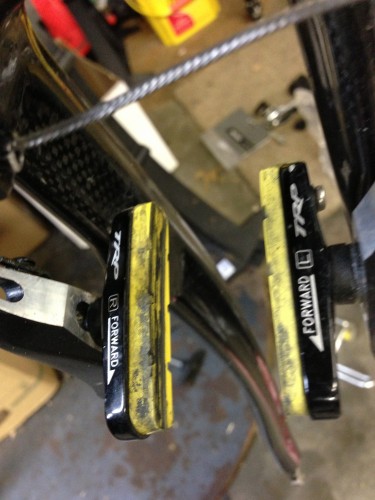 It’s important having new rubber on your pads, especially in the snow. This is left over non carbon rim stuff. 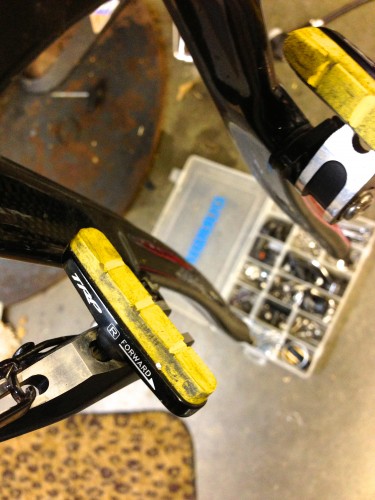 This is after taking just a bit of rubber off. I cut new slots in the pads if they are worn past them. 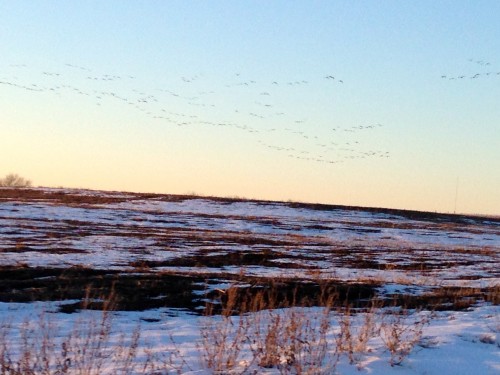 I was thinking how much I enjoy riding in the winter today. I sort of hate these races being so late in the season, but when I’m actually out riding, it seems great. 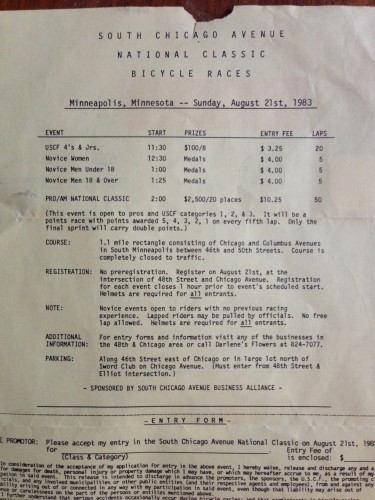 I was looking for some thick fishing line to sew up my backpack and found this entry form from 1983 in the drawer. Weird. We used to race for more prize money back then, with much, much less entry.

20 thoughts on “Lance Fesses Up? Heading to Chicago”