I hope everyone had a good Christmas. It was good up in Chicago, other than I ate too much junk. I had lots of good food, but for some reason, once you’re completely full you can always stuff in sweet stuff on top of it. I remember reading somewhere a long time ago that if you’re going to eat dessert and are on a diet, it’s better to eat the dessert first, because you’ll eat less food before it if you do. That just seems wrong.

Yesterday, I got up kind of late, so didn’t get out on my bike until close to noon. By then snow flurries had started. I picked the wrong direction to ride. I wanted to ride to downtown Chicago. Christmas is pretty much the best day of the year to do that because there is hardly any traffic on the roads. The problem was that as I got closer and closer to Lake Michigan, it was snowing harder and harder. I made it to Evanston and Sheridan Road, but by then, the roads were pretty bad. Not really treacherous, at least for me, but sketchy for sure. I know most of the cars passing me weren’t all that comfortable moving into the middle of the road to get by. I turned around and headed back West. About 1/2 way back to Mt. Prospect, the roads were pretty clear, but they were super wet, spraying all over me. It was only 22 degrees out, so I guess it was the salt making the roads wet. My lips were hurting from the spray, so I assume that was the deal. So, I just rode directly back and called it quits at 31 miles.

I ran, did some wind sprints on Christmas Eve. My legs are pretty sore from that. I felt better running than I did a couple weeks ago, so that is a good sign, but really not up to my standards.

We’re driving back to Kansas this morning. Then I have to decide what to do from there. The long range forecast for Topeka doesn’t show much above 40 degrees for the extended future. There are two cross races in Dallas this weekend, but after that, it looks like it is supposed to rain for awhile, even though it is going to be in the 60’s. The 60’s and no rain would be nicer, of course. I guess I have a couple days to decide. 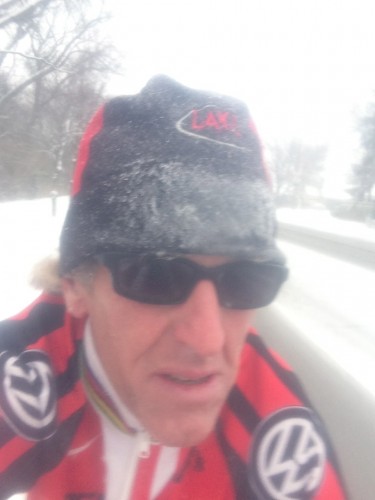 Self portrait before it got real bad. 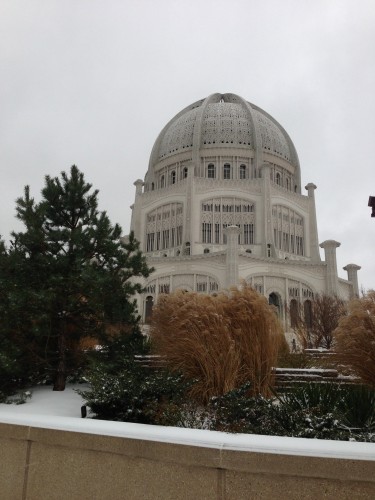 This is about as far as I got on Sheridan, the Baha’i temple. 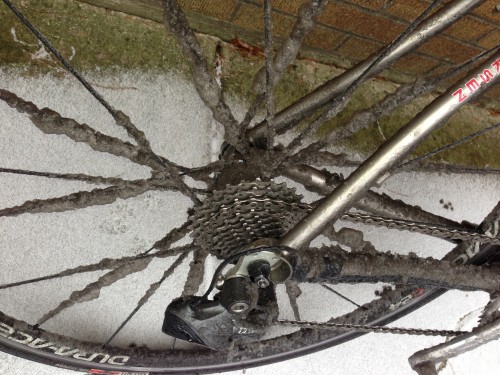 My bike was pretty frozen up when I got back. 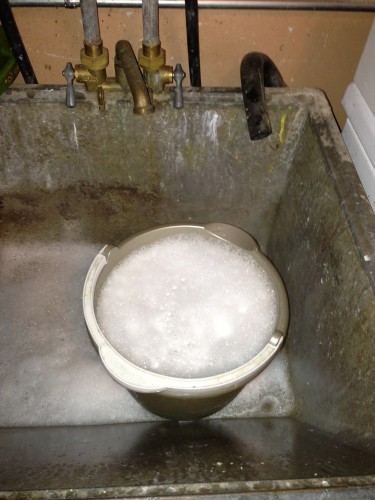 Luckily, Trudi’s mom was washing clothes and I kept getting buckets full of hot, soapy water. Kind of made me feel green, using recycled wash water to clean my bike. 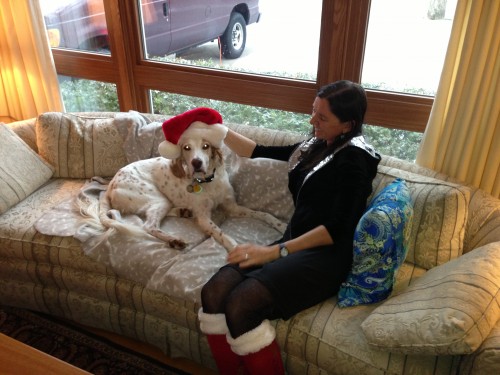 Here’s Trudi messin’ with Bromont. He doesn’t like it very much and is looking to me for help.