Yesterday I finally had an alright day on my bike. It’s been awhile. It wasn’t a great day, but it was a lot better than it has been recently.

Joseph Schmalz rode over to Topeka and met me and we rode back to Lawrence on gravel to meet up with Brian Jensen and Matt Gilhousen at 3pm. It is nice that they can play a little hooky from their jobs at TradeWind Energy when it is going to be nice out to ride. It was in the mid 50’s most of the afternoon, but started cooling off quickly when the sun got low. Bill was about 30 minutes behind Joseph and I, so he showed up a little late to Lawrence. He drank a quick cup of coffee and we headed back towards Topeka. I was going to stay with the Lawrence guys because Trudi had driven over to Lawrence to Christmas shop earlier.

Anyway, I didn’t feel that great when I first started. I’ve been stretching a ton and think it might be making me feel weird riding when starting out. I started feeling better after an hour or so. My left leg was 70% good and I seemed to have some power. I’ve been kind of breathing badly, a little raspiness in my throat, for a long time now. It was still there, but it didn’t seem to matter.

I ended up with close to 70 miles. The average speed wasn’t that great, but it was super windy early and it was on gravel. Afterward I ate in Lawrence with Trudi, then hung for a while at Freestate to watch the KU basketball game. Downtown Lawrence is so great. If you’ve never been there, you should go out of your way to try to make it sometime.

I missed all the new cycling gossip yesterday. I guess the Rick Crawford thing was the biggest yesterday. I have no idea why the guy wouldn’t have just come completely clean to start with. Signing a “pledge” to accept a lifetime ban if involved in addition cases was just plain dumb, if he was involved in additional cases of doping. I’ve already written about whether I think that he was suppling drugs to more than two guys. It seems that Rick Crawford is going to have to start looking for something else to do in the very near future.

Today, winter is officially blowing in here in Eastern Kansas. Well, not really winter. It is supposed to rain this afternoon and then turn to snow at night. I’m going to try to get out this morning before it gets wet. I’m actually mildly excited to see if yesterday was just a one up thing or I’m actually riding better. Either way, it was motivating realizing that I’m not just a POS on a bike all the time. 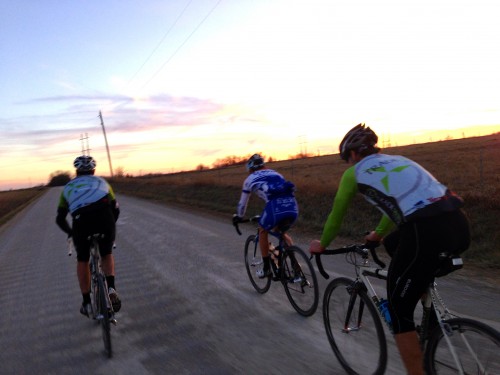 It was nice riding back to Lawrence with these guys with such a nice sunset. 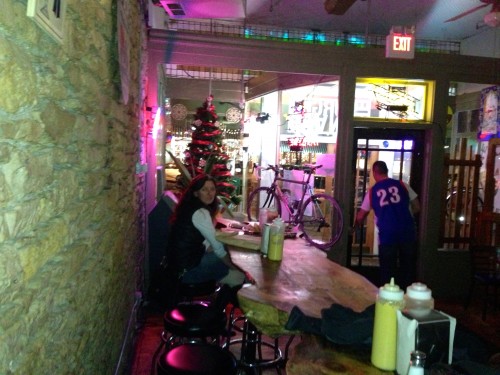 We ate at the Burger Stand at the Casbah. It is a pretty cool I could just bring my bike into the restaurant. 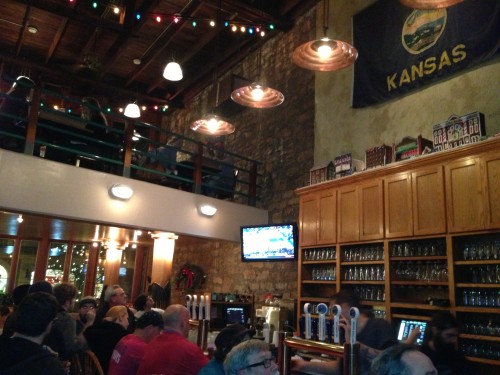 This is Freestate Brewery, a great place to watch KU basketball. The architecture in downtown Lawrence is all original from the 1800’s. 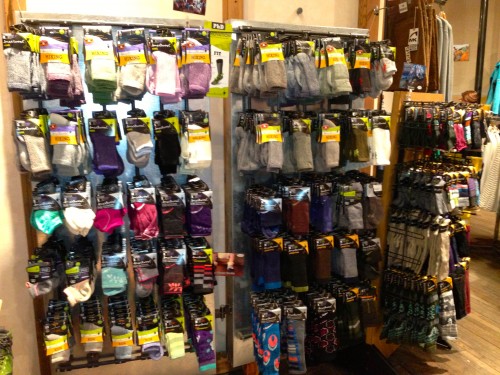 Sunflower Bike shop has the largest Smart Wool sock offerings of any place I’ve ever been. This is only about 1/3 of the selection. 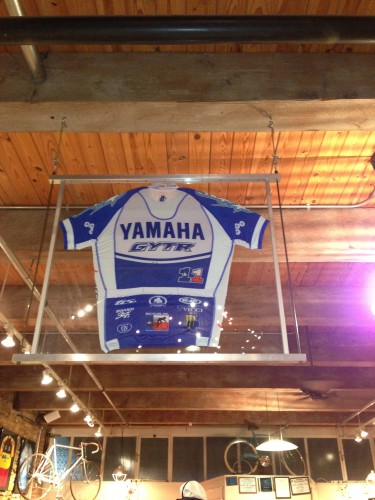 This is Joseph’s jersey from this year. It replaced a signed Lance jersey in the prime slot. (Dan has correct priorities.) You might think this jersey would fit the Michelin man, but it is an optical illusion. 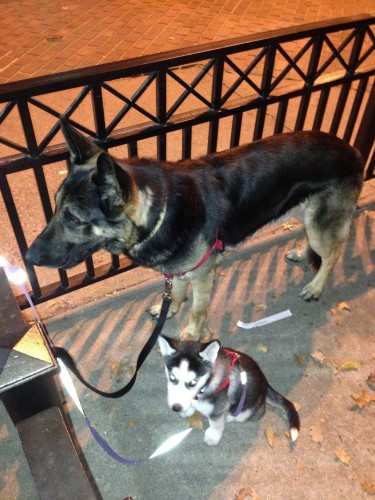 I saw these two guys walking in downtown. They were so cute. Big German shepherd and little husky I think. 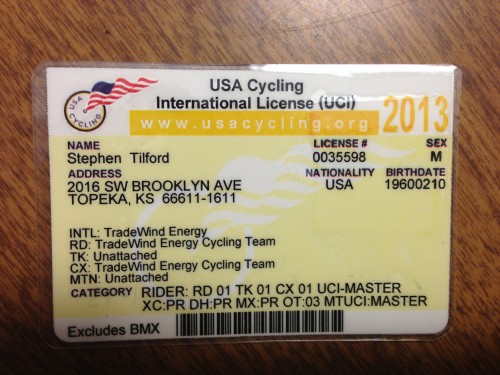 I got my 2013 license back from USAC today. It was very quick turn around. It is the first time I’ve had Master written on my license. I guess that is mandatory if you’re going to race Master’s Worlds in Louisville. It seems stupid. It seems like your birth date would clarify that.