Thanksgiving yesterday was nearly over 70 degrees here in Topeka. I went out with a group from my house at 11:30 and rode 40 miles. I could have went back out and met Bill, who was riding back from his Aunt’s house out west, but I didn’t have the energy. It would have been nice to get in 4 hours, but it wasn’t in the cards. Today, it is in the 30’s right now and the wind is howling. Maybe that’s a good thing?

I’ve been feeling subpar for a while now. Even today I woke up feeling like I drank all night in a loud bar. It’s not good for the motivation for training. I’d been hoping that I would be going at least okay by now after riding in California for more than a week, then in Texas for the same amount. But, I’m still at square one.

I know that I need to do some intensity, a lot of intensity, but I find doing that useless if I’m not riding well. From personal experience, I don’t ever train hard, effort-wise, when I’m not pedaling good. I’ll race when that is the case, but not go out and ride hard.

So, I’m just sitting around waiting for the “good blood” to take effect. The problem is that it has been a while and I’m out of my normal comfort level waiting. I can usually handle these ebbs and flows pretty well, but there is only a couple months until Master’s Worlds in Louisville now, so I’m getting very impatience.

So, the weather changed and I’m hoping that my form will too. Many times when it gets cold, I start riding better. Hopefully that is the case now. I think I’m going to have to start racing again, even though it will be humbling. Cross isn’t like riding a road race or criterium, where even if you’re going badly, you can get something out of it. Cross is full gas with very little chance for having a result other than you deserve. That is one of the things I like about it. That’s one of the things I hate about it also.

Here’s a blood test I took last week. Anybody see anything? 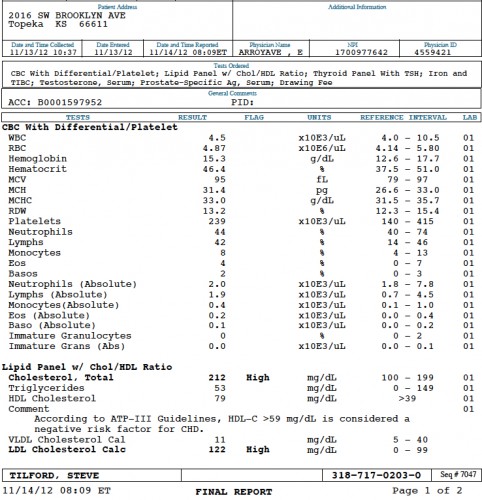 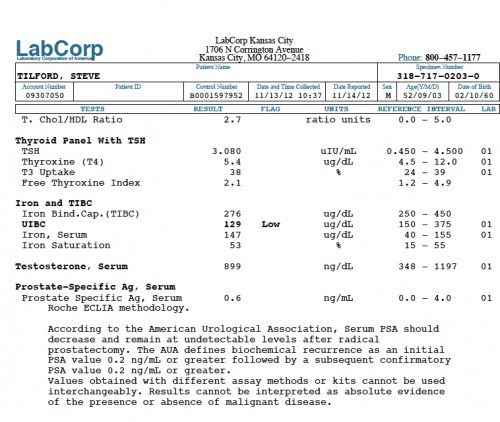