Okay, this is the follow up to Kris’s fight. A few of you asked about him wrestling a guy with a mower. That is true, but the story starts much earlier.

One day I was mowing the back yard and Kris came back from a ride and his jersey was all ripped up. It turned out that Kris got into a tangle with some redneck in a pickup. The truck stopped and Kris realized it was going to get sort of ugly He took off his cycling shoes in front of the neighbor’s architectural business.

Pretty soon they were at it, I’m not sure who was winning by the time the guys from the office came out and broke it up, saying they were going to call the police. Like I said above, Kris’s jersey was ripped and he said one of his back teeth was chipped.

Flash forward over a month, we are driving through Westboro, a nice neighborhood in Topeka, throwing newspapers and Kris tells me to stop the car. I stop the car and Kris gets out and starts running back towards a huge house with a guy mowing. I thought I was hallucinating, but before I could blink, Kris had tackled this dude and was mildly pummeling him. The guy had no idea what hit him. Anyway, after about 15 seconds, it was all over. Kris got up, said something to the guy and came back to the car.

I had no idea what I had just witnessed. It was like when I had a cat that jumped over a bush, ran across the yard and jumped on the back of a German Sheppard, who was on a leash. Kris goes on to explain that the lawn mowing guy was the pickup truck driver from the previous month. He said that he said something like “Don’t mess with cyclists.” I’m pretty sure that wasn’t the best way to get his point across. And I doubt it worked too well.

Anyway, it isn’t like Kris is beating up every driver giving him shit. These are the only two instances that went beyond words. But, you have to remember, it was the days when the fighting was just fighting and the worst that was going to come of it was getting hit really hard in the face. Those days are long gone. 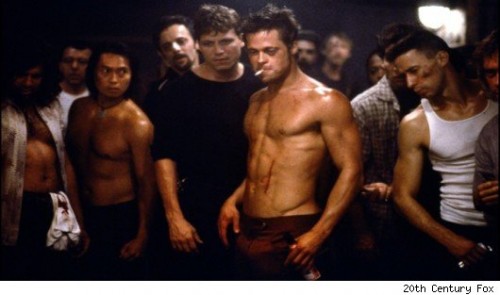 8 thoughts on “During Ride Fight and Delayed Retribution”