I got a few emails asking me some specifics about the Berryman Epic Race and I thought I’d just answer them here. First, the course is pretty rocky. Not solid rock, but there are sections that have a lot of challenging rock ledges. Once again, nearly all these rocks were covered with leaves, so it made it that much more difficult to read.

I was riding about 22 psi in my rear tire and 20 in my front. I pre-rode about an hour on Friday afternoon and started with 28 psi. I stopped after a mile or so and let a bunch of air out. I was riding so much smoother and thought it was the perfect pressure. When I got back to the car, I checked the pressure and it was 15 psi. I laughed. There is no way to get through the race with that little pressure, at least at my weight (158). So, I decided to ride 20 in the front and 20 + a pump in the rear. I knew it was going to be a risk, but there are times to take risks and I thought this was one of them. I was riding Specialized Fast Trak, 2.0 tires front and rear. The first two times I rode this race I flatted a lot. 3 times the first try and then 2 the second. I didn’t flat last year or this year and I was riding the same tires both times. The sidewalls do seem sort of flimsy, but I haven’t even cut them and this is a place to cut tires.

I have only ridden a shock fork on this bike twice. Both times here. The Eriksen 29’r was built to be a fully rigid bike, but I went ahead and put a fork on it, with Kent’s advise of course. It is a Rock Shox Sid 29’r fork. I had no idea how much pressure to ride, so on Friday night, I went onto Youtube and watched a video about setting up the fork. I didn’t even realize that there was a little chart on one side that listed suggested pressures. I rode 120 psi in the fork, thinking that it would be pretty stiff for my weight. I don’t think it was enough pressure, judging by how much compression I got. Anyone chime in here? 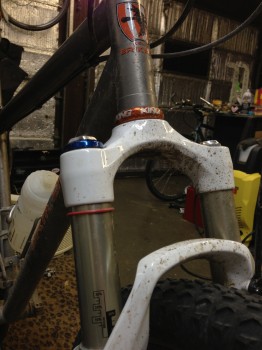 It seems to me that it shoudln’t compress this much?

I was amazed at the equipment at this race. Nearly everyone there, at least the guys lining up at the front, were riding full carbon frames, with a lot of carbon wheels. There is no way I would ride a carbon rim at this race, especially with only 20 psi. I dinged my rim a couple places and for sure would have broken a carbon rim. I do need to get some new equipment for my bike though.

I didn’t fall once, which is the only time out of 4 times here that is the case. I was concentrating extra hard on the descents, trying to ride them clean, while trying to make out the course through the leaves.

In order of soreness two days later, it goes descending order from most to least – lower back, left hamstring, both triceps, shoulders/neck and right hand. My right leg feels pretty good though. I think that when you’re “off” physically, you can do some damage to your body. When I’m riding well, I feel pretty good the next day. Usually it’s two days after an effort like this is when you feel the worst.

I rode MTB bikes again yesterday. Catherine, Bill and I went over to the governor’s mansion, here in Topeka for an hour and a half. I felt pretty toasted for the first 30 minutes and then felt better. Not good, but better than I started on Saturday. I think I’m going to look for some more MTB races to do this fall now.

Okay, that the end of all the extras. I hope that answered everyone’s questions. 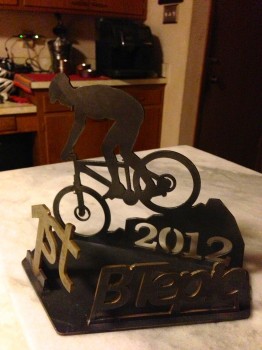 Here’s the trophy again. It is pretty cool, made of laser cut steel and welded. 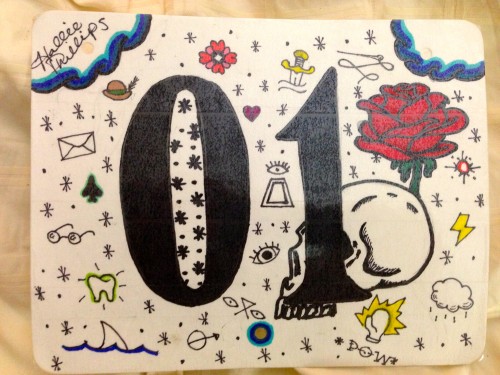 The top ten from the previous year were given custom numbers too, courtesy of Hallie Phillips. 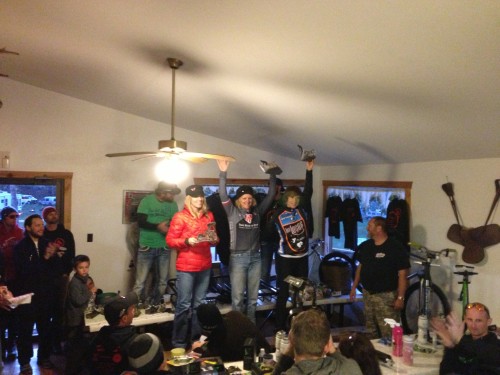 This is the women’s podium at the awards banquet. The tequila hadn’t come out yet. 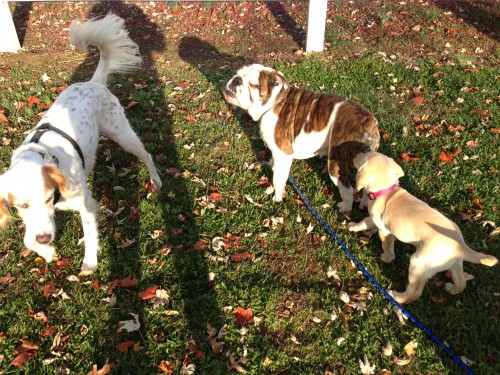 Bromont got tired of these guys, Scott’s Bulldog, named Surley, and this Lab puppy, bothering him. 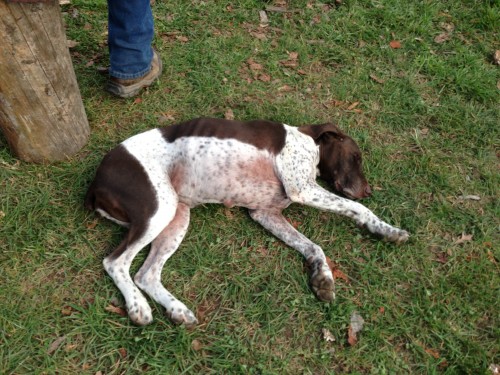 He would rather play with another hunting dog, but this German Shorthair was asleep by the fire. 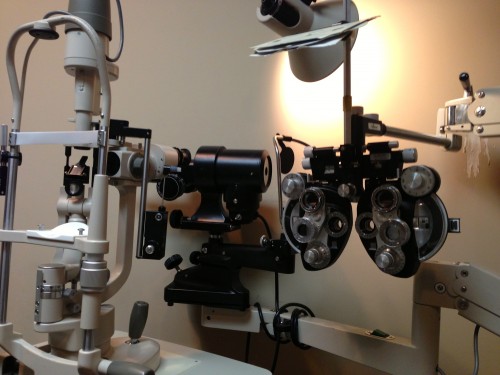 I went to the eye doctor yesterday to get my right eye looked at. He told me it looked good to him, which was nice. The equipment in his office looked so ancient for some reason. 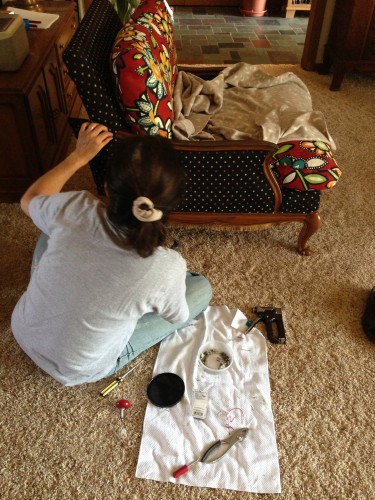 Trudi is reupholstering a chair in the living room. I didn’t know she knew how to do this, but it looks great so far. 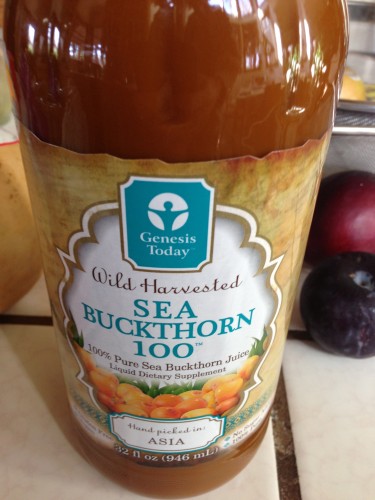 I saw this bottle of stuff in the Walberg’s kitchen. Catherine hasn’t tried it yet. It looked pretty horrible, but maybe it tastes okay. Anyone try it for any reason? 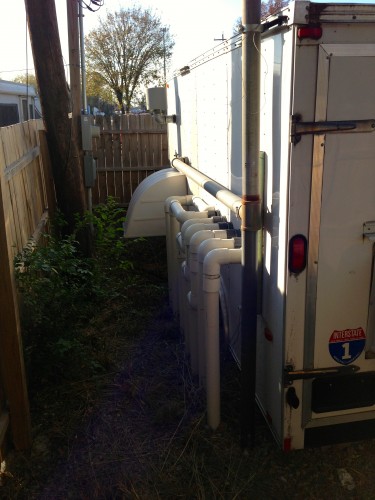 Does anyone know what this is. It’s a trailer in the parking lot of a used car lot in North Topeka. It has all these PVC pipes going into the ground on one side and a tall exhaust pipe that stick up pretty high. It makes a noise like a generator. 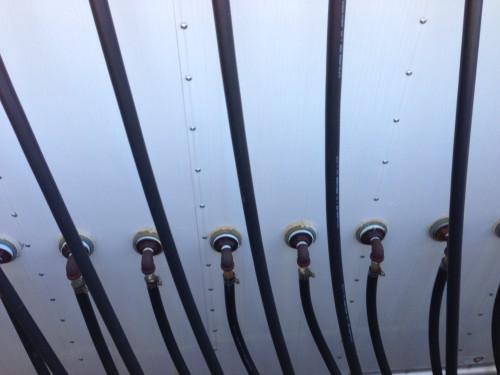 This is the other side of the trailer. These go into the ground also.

11 thoughts on “Just a Few More Things and Observations”