Yesterday I did a 4+ hour ride on my MTB. I rode over to Lawrence on gravel, then did the white trails at Clinton and rode back on gravel on the River Road. I fell apart pretty early and it never got better. Ride to the right on Strava. (I’m not exactly sure why that is there now.)

I haven’t felt good riding for a long time now. I thought taking over two weeks off would have helped, but it seems to just have made me less fit and slow. Yesterday it might of been other things I wasn’t taking into consideration at the time. Like it was in the mid 80’s, the wind was blowing over 30mph and I was riding a MTB bike. But, as I write that, even now, I realize I know when I’m riding okay/good. This wasn’t even close.

I lost about 6 pounds and drank 2 bottles, plus a 44 oz Gatorade and a 16 oz Coke. The Coke helped the most. It got me through the last hour. I rarely ride as badly as I did yesterday. Hopefully it was a one time fall occurrence.

I was thinking about baling on the Berryman Epic on Saturday, but I can’t do that. There is a huge cold front coming through tomorrow morning and the high after that is supposed to be in the lower 50’s through the weekend. The same south of St. Louis, where the race is. High on Saturday is supposed to be 49, with a low of 28. That seems pretty cold, on paper, but for racing off-road, it would be good.

I don’t have high hopes for this race, but I have to go through the motions. I need the mileage, plus it is a blast riding for over 4 hours, nearly all on singletrack. The finish place is what it is.

I like the fall for a variety of reasons. I like all changes of seasons. The colors are one good reason. The cool morning and nice days are another. Riding on gravel, you get to see more things than riding on the road. I don’t know if that is because stuff is closer to the road or I have more time to just look around. Whatever the reason, I see more.

Riding on singletrack at Clinton was jarring. The white trail is crazy rocky. And now covered with leaves. It makes it pretty technical. Since I was going so badly, it was extra hard. I wasn’t riding that bad technically, but I didn’t have energy to do it correctly.

I think I’m going to pretty much rest the next couple days. There would be no upside to being tired before a 60 mile MTB race, mostly on singletrack. 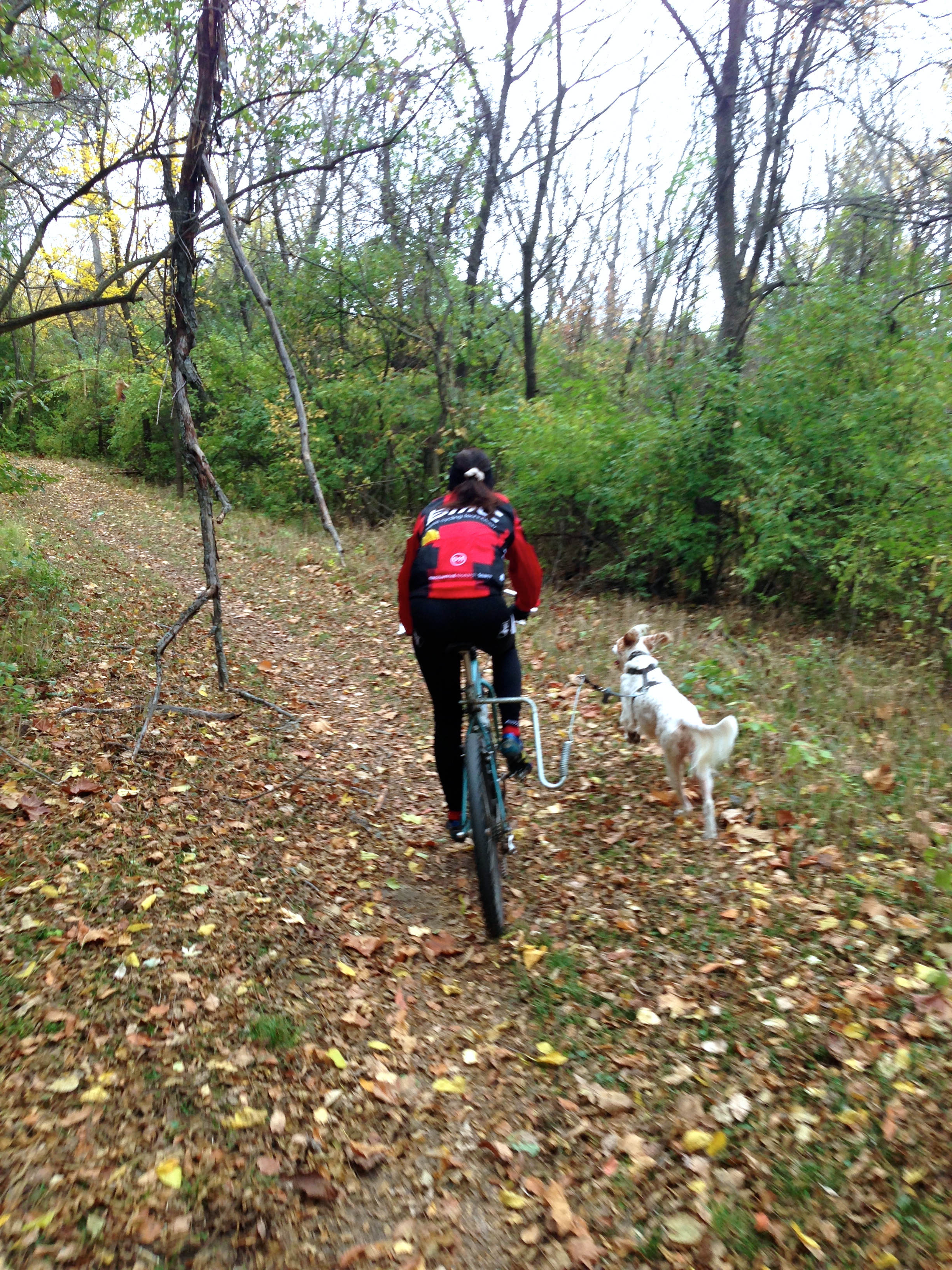 Trudi running Bromont a few days ago before it got hot. 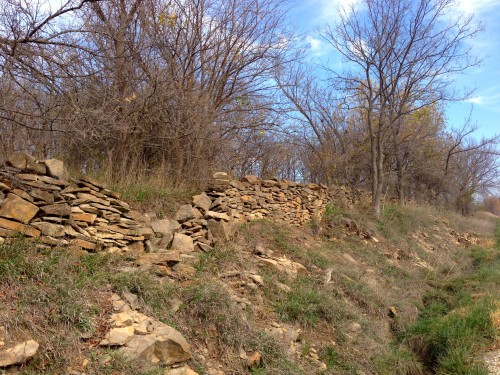 There are lots of these rock walls between Topeka and Lawrence. I think the German prisoners of war during WW 2 build most of them. 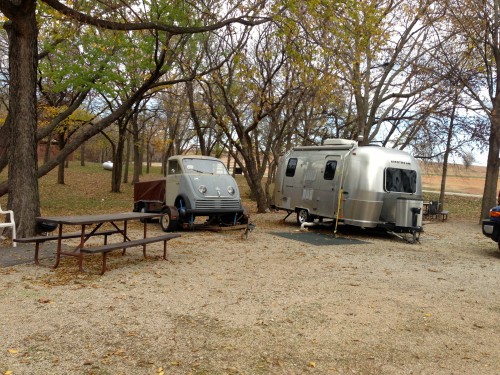 The camp sites at Clinton seemed closed, except for these guys. Anyone know what kind of truck that is on the tow dolly? 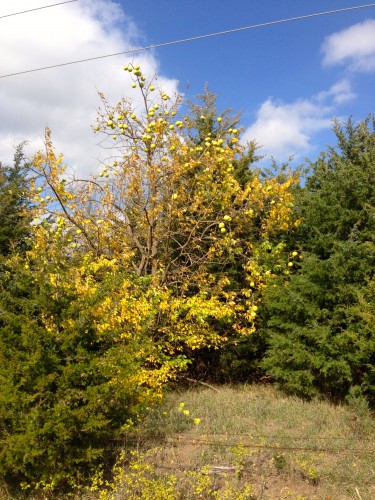 It is a banner year for hedge apples. 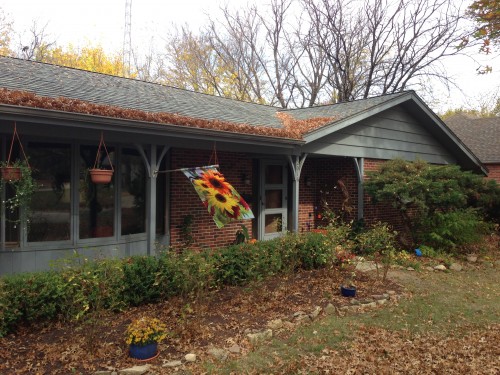 All the leaves in Shawnee County fell last weekend. Maybe not all, but most. Guess it’s time to clean the gutters? 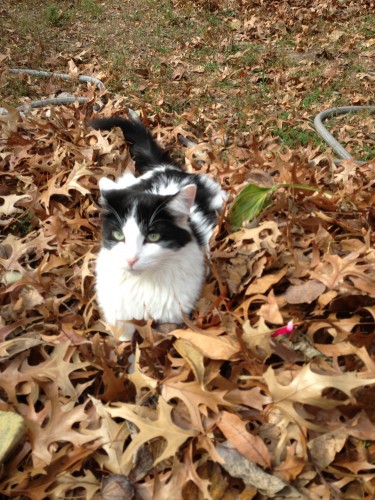 This is Fran, she loves playing in leaves. 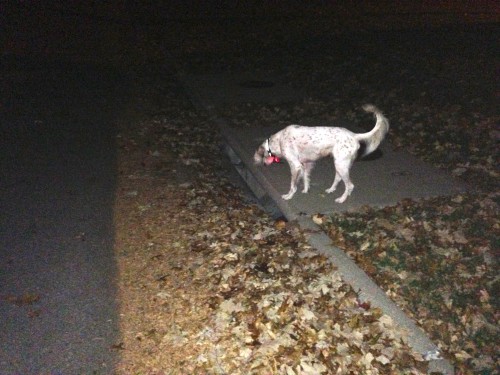 And our rain gutters are full of leaves too. 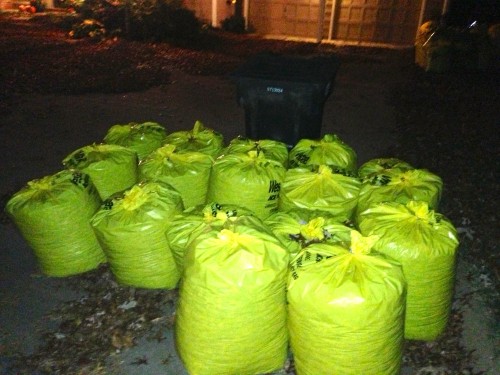 I hate this. And this is just the tip of the iceberg. The guy has 3X as many bags further back in his driveway. We need, as a society, a better way to deal with leaves. Sending them to the dump is insane. I have a compost pile in the back. 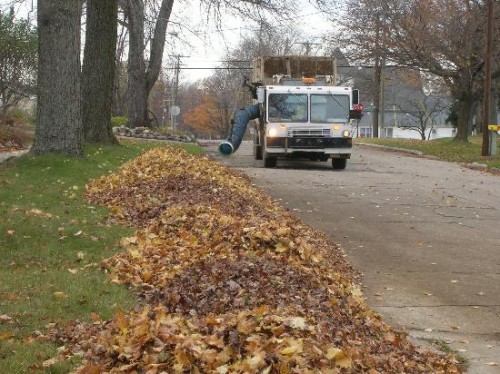 Up in Mt. Prospect, a suburb of Chicago, they collect the leaves with a sucking machine every Monday in the fall. It makes so much sense. A city service, taking the leaves to the vegetation dump instead of the landfill. It keeps the storm sewers clean. It seems like it would pay for itself.