I was hiking last weekend up in the mountains above San Diego where Lance was winning a triathlon at the same time. I was thinking about his current situation and how hard it must be for him to continuously go out in public and face the questions. I think would be so unbelievably energy zapping that I’d think it would be nearly impossible to progress.

I have to give the guy credit. He seems to be going full tilt, doing athletic events throughout North American. Last week in San Diego, they were doing an after event event, and that the VIP tickets were selling for a grand. It seemed so strange that he didn’t want to just fly in and fly out.

The guy doesn’t lack any cojones in his ego department. Actually, it’s not really an ego deal, it’s a “fuck you world” deal. In this article he says that his “conscience is clear”.

I did an event back in the early 90’s that was called Challenge of the Champions. It was a Laguna Sega in Monterrey, where the Sea Otter is held. It was the predecessor of Sea Otter put on by Rick Sutton. Anyway, Rick brought a lot of us in from different aspects of cycling and triathlon. Ned, Lance, Brian Walton, Mike Pigg and a few others. On Saturday you pick 2 out of 3 from a road race, mountain bike race and 5 km run. Then on Sunday was a biathlon, 5 k then bike a few laps of the race track and another 5 k.

Anyway, I don’t exactly remember where I finished up there. I think I was 5th. I don’t think Lance won overall. I know the guys name that did, but can’t remember it right now. (Somebody help out here?)

I have this video, I’ll have to look for it, and when Lance is getting interviewed, he says that “Every sport needs a John McEnroe and I’m the John McEnroe of cycling.” This was 1991, before the current Lance. Amazing.

Lance wasn’t lacking any self confidence over 20 years ago and that seems to be the way he’s dealing with this situation. It is pretty amazing to watch. 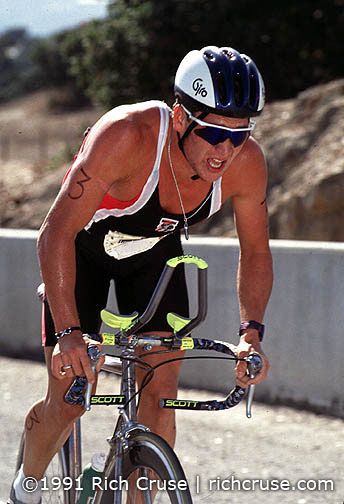 Lance racing the Challenge of Champions back in 1991. Photo by Rich Cruse.