There are thousands of reasons that each of us are where we’re at in the sport of cycling. The indirect paths that most of us traveled to fall in love with the sport, are so complicated, and also interesting, that it makes the odds infinitesimally small, that anyone does the sport at all.

I race for so many reasons it would take a small novel to record. During the Chequamegon 40, I recorded so many new experiences, that I am still going back through them in my mind. And I rode nearly half the race on my own, so I missed out on a ton of the potential memories.

At the start line on Main Street in Hayward, an old friend, Doug Swanson rolled up to the line, pretty late. I was wondering if Doug was going to make it to the race, I hadn’t seen his name in any results this year, but I hadn’t been following them as closely as normal, so I might have missed him.

I asked Doug if he had pre-ridden the course and he said that he just drove up that morning. I thought, wow, a 3 hour drive before Chequamengon makes for a pretty early start to the day. He said that he wasn’t in shape and would be happy to survive the road section to Rosie’s field. He mentioned something about never entering Rosie’s field in worse than 3rd place, but that wasn’t happening this year.

Doug has won Chequamegon a couple times. The first time I met Doug was at Chequamegon, I think it was 2001. He was a friend of Jed Schneider, who I’d driven up with from Topeka. As circumstances would happen, it was Doug, Jed and I riding up the Seeley Fire Tower in the led, with Dewey Dickie dangling most of the last 10 miles. Doug was riding great, but half way up the climb he casually said that he had a flat. That was a drag. I went on and won the race that year, in a sprint with Dewey.

Like I said above, Doug went on to win the race a couple times. He has a love affair with starting hard in the thick grass of Rosie’s Field. One year he did his normal, crazy fast start and didn’t slow down. That was the year that Ned Overend came to play. I was the only one to stay on Doug, for maybe 4 or 5 miles, but I eventually blew. By the time we got to OO, a little less than half way through the race, I was hearing crazy times. 2 minutes, 3 minutes, then 4 minutes. I didn’t like the sound of any of them. But, they were all wrong. I think Doug beat us by close to 10 minutes that day. Ned was astonished that some local guy he hadn’t heard of before, schooled us like that.

He outsprinted me once too, so his isn’t a one trick pony. He has the course down as well as anyone in the race, other than maybe me.

Doug has a family now and obviously doesn’t get to spend enough time on his bike as he would like to. But, he did get into this car at some insanely early hour, to drive up to Cable to race on Saturday.

The start towards Rosie’s was kind of tricky this year because it was pretty much straight headwind. The front of the field was meandering back and forth across the road, with the Eppens, on their tandem, doing the majority of the work. But, it was difficult to hold your place at the front because everyone was hesitant to pull into the wind.

There is a small rise on 77, 200 meters before you do the sharp left turn onto the grass of the field. This is pretty much an all out sprint here. And sort of mass confusion. Mike Anderson had entered the field a couple hundred meters ahead of us, separating himself when the quads pulled away. The Eppens were leading and I was hovering around 10th. Everyone swung wide for the corner, but I cut in short.

Right before entering the grass, Doug comes flying by on my inside and hits the grass in 3rd place. He looks over his shoulder and does a little mock victory salute. But, I can see on his face, he had already finished his race and he was more than good with it.

I thought about this while riding the last hour. I was firing on only 3 cylinders, so I needed to get my mind off of the extreme pain I was experiencing. I was thinking how great it was that Doug drove over, just to get the flavor of the race. He knows he has the ability to compete at the front, but just not this year. So, like thousands of other people that did the race, he decided to accomplish a small goal, one that would seem silly to most. But, it didn’t seem silly to me at all. It is what defines his drive and one of the reasons he has crossed the finish line at Telemark with his arms in the air. 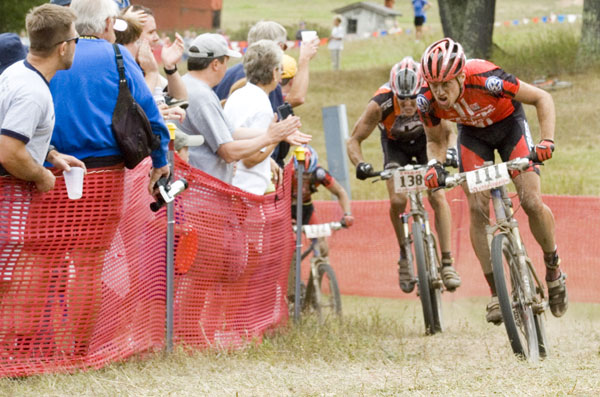 Doug outsprinting me at the finish of Chequamegon. He had a much better number than me.

7 thoughts on “The Reasons to Race”