The race on Saturday was great, as usual. I wasn’t close to great, but that is how the sport goes. I pre-rode out the Birkie trail about 10 miles at 8:30 am, an hour and a half before the start, and knew it wasn’t going to go that well for me. That being said, I wasn’t nearly as bad as I could have been.

The race is around 40 miles, nearly completely on logging roads and/or Birkebeiner Ski trail. The I’ve been doing the race for nearly 15 years now. Wow, that is a huge number. I’ve won 3 times, 2nd a couple more times, 3rd a couple more again, and then lots of other places in the top 10. Anyway, the course has gotten quicker and quicker throughout the years. It used to truly be a race for a guy that has raced MTB bikes. But, now, other than a couple short sections, the race is smooth and wide enough to drive a VW beetle on. So, more and more road riders are showing up the last few years.

The first two miles is on a state highway. The start was pretty tame this year because it was headwind on the road. I was on one of leading quads, but only stayed on it a little bit on the road. I think it was Mike Anderson that stayed on the 2nd quad and he got a few hundred meters away before he got dropped. There was a little scrum for Rosie’s field and I hit it in the top 5. Jason McCartney went to the front and started hammering and I got behind him. The field was only cut recently, so there wasn’t a beaten in path. Jason pulled pretty much all the way to the Birkie trail, which is only a couple minutes of field riding.

When we got to the Birkie trail, the race started to break up. It climbs pretty gradual and you have to ride on a single track that is in the middle of the trail. There is a huge slinky effect for the first 7 miles and the group gets whittled down to the survivors. When we got to the first road section, I think there was around 20 guys left out of 1800 starters. I was riding pretty consistently in the top 5 or so, but not within myself at all.

On the next Birkie section, riding to OO, there were 11 of us left. I made it pretty good to Janet road, but then it started going south for me. On the Martell pothole section, chaos happened. I went into the section at the end of our group, but knew the course and figured that I would be moving up quickly getting to the first mud hole. I didn’t realize that most of the group hadn’t pre-ridden the course, and we were all over the place. By the time we got to the end, I was in 5th, but Mike Anderson, Bissell was a few hundred meters ahead. We came out onto Boedecker Road and I started having problems. I had a bunch of grass wrapped around my bottom 3 cogs in the back, so I only had a 16 in the back, when I needed a 11. That is an excuse, it just accelerated the inevitable. I got dropped on a fast downhill section and knew I was going to be riding a long while by myself. At least I made it 22 miles, there was 18 miles to go.

I don’t get dropped out of a group very often. But, what adds salt to the wound, is when I get dropped and then the group sits up and goes easy. And that is exactly what happened. The group of 10 rode the next couple miles just a couple hundred meters ahead of a flailing Steve.

I’m not sure what my problem was. My lower back was hurting and I was getting nearly no power out of my left leg. Plus, I was sort of bonking the whole last half of the race. The whole thing annoyed me to no end, because I had made it to the long rode section and couldn’t sit in the next 8 miles to the Seely Fire Tower climb, where I would have gotten shelled for sure.

So, I ate a ton and tried to keep some kind of pace until the Fire Tower climb, which is 11 miles from the finish. After you get over this climb, it is mainly downhill on the road, other than a very hard 2 mile section on the Birkie trail. I crawled up the Fire Tower climb. I kept looking back, expecting the Eppens, on their tandem, to be dragging a group of 15 guys up to me. I looked back about half way up the climb and there was nobody. When I got to the top of the climb, Hollywood was up there and had a Coke. I told him to put it in my pocket. He did and told me it was open.

The Coke helped immensely. I actually didn’t ride too badly over the last Birkie section. Big ring the whole way, standing on the hills. I couldn’t see anyone in front, or behind me. There is only 6 miles to go from here, mainly downhill on gravel. I only had a 16, so I was spinning like crazy. I wasn’t too worried about losing any places. It really didn’t matter. I passed Cole House a few miles from the finish. He was riding on a rear flat. I heard he was riding with tubes. Cole, Cole, you know better than that.

So, I rode the last bit and coasted down into Telemark on my own, finishing 10th. Again, here is a link to the complete results. I can’t complain really about the result. It wasn’t close to how I had hoped to ride, but I got about the best place I could have and I might have finished much, much worse. I have to admit I did ride pretty hard the last hour on my own. I lost close to 6 minutes to Matt Busche, but that isn’t really that bad considering how badly I was firing.

I talked to Matt, Mike Anderson, Brian Matter and the others that were up front. When the group hit the Fire Tower climb, Matt Busche, RadioShack, went hard and only Mike Anderson stayed on. Brian told me, he had a mental fart, or maybe just couldn’t get into the right mindset the whole day, and started up the climb as the last rider in line. By the time that Matt and Mike were gone, Brian had given up too much ground to catch them, even though he put in a big effort.

I would have bet anything that we would have ridden under 2 hours. Matt was 30 something seconds over. I don’t think that course records really apply to MTB races, but here it is about as accurate as it can be.

Flash forward to yesterday. Kent Eriksen and Company stayed around to ride some single track before he had to head down to Milwaukee to visit family. Anyway, we have to ride over a couple 6 foot berms to get over to Boedecker Rd. Going over the first berm, I got my wheel cross up starting down and was launched over my bars. I landed flat on my chest on a rock. I lost my breath and was sort of dazed. I did the whole ride, cut a bunch of wood, and then early evening, my chest and ribs started aching like crazy. I either broke a rib or just ripped the cartilage. It hurts pretty badly on my side and right at my chest plate. Plus, I can’t take a deep breathe. I slept like shit last night. I hate it when stupid stuff like this happens. Rib injuries are not good. They keep getting irritated over and over again. Not the way I was hoping start training for cross.

We’re heading back to Kansas this morning. It’s 10 hours. It is only going to be in the 50’s up here and I have a bunch of stuff to do at home. This season has been a little bit of a bust. I’ve been kind of hurt or out of shape most of the year. Winter is usually good from me. Hopefully, that will be the case this year. 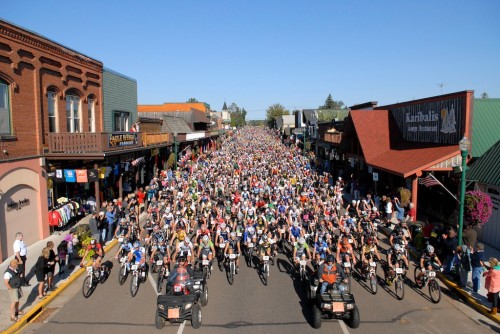 The start is pretty impressive. If you click twice, you can get the full perspective. I’m on the quad on the left talking to Cole House. Photo by Brett Morgan. 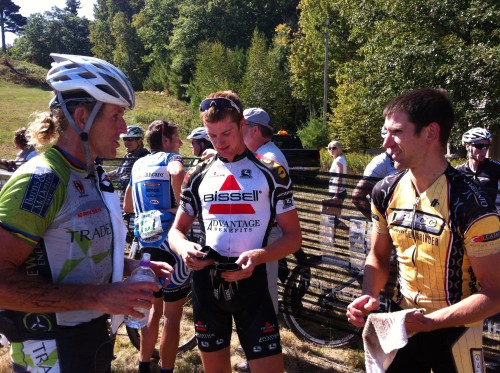 Talking to Mike Anderson and Brian Matter after the race. 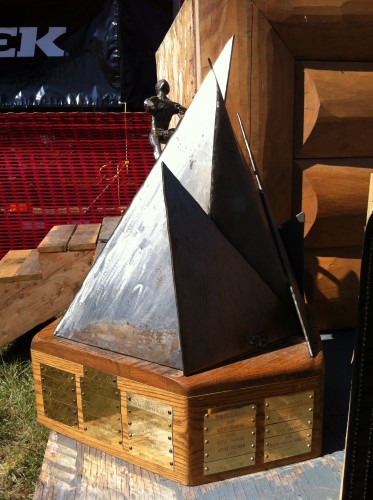 Here is the trophy for the race. If you blow it, by clicking 3 times, up you can read the names on the plates. 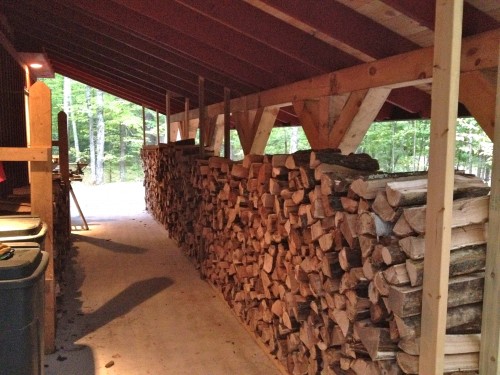 Here is the wood pile we all did after the race. There is more on the other side. 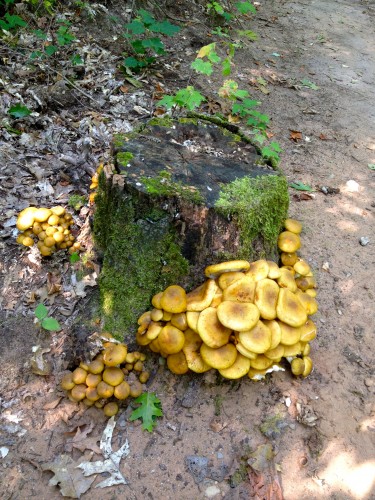 This was on the new single track. I think they are honey mushrooms, which are edible. 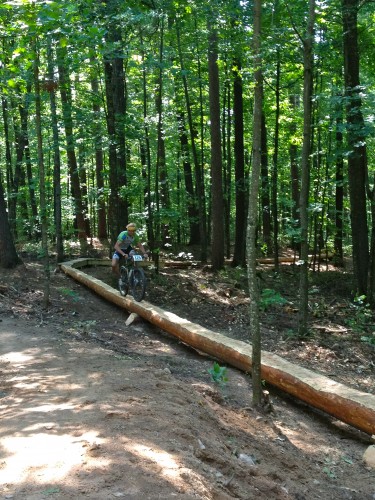 This is on the new single track. It was way harder than it looks riding up the thing. Riding down it was no problem, but it took me a couple tries before I got the hang of riding up.