Okay, I’m not exactly sure why I got so riled up with the Vaughters narc’ing on Danielson thing yesterday. It wasn’t like it was any surprise at all to me. I guess for Jonathan to act so nonchalant about the whole thing, acting like he just needed to make a couple little tweaks and take a rider that had doped for years and then make him a clean Tour rider, pissed me off. He wasn’t telling hardly any of the story. I realize the post was blunt, maybe with even an seemingly angry overtone.

It’s not like I don’t like Tom Danielson. I don’t really have any personal relationship with the guy at all. I can’t really see a circumstance where he and I would be friends at this point, but other than talking to him a few times, and racing with him a bunch, I don’t know him at all. That being said, I did have a relationship with him on the bike. And, I don’t and never did, have any respect for Tom Danielson as a bike racer. Sorry, but that is my deal. He fucked up his chance at the sport at long time ago, in my opinion, so I don’t feel like I need to give him the time of day in that regard.

I guess another reason I was I worked up was because I’ve had the “pleasure” to watch the meteoric rise of Tom Danielson from inception to present. And at the inception, he didn’t have the goods. Sorry, but facts are facts. Let me tell you, back when he was going to Fort Lewis, I was over 40, and there is no way the guy could beat me in a MTB race, let alone a road race. Then presto magic, 6 months later, he can slay any rider the United States going up hill. And on the flat too sometimes. It don’t happen that way. I have no idea what Thomas’ physiological capabilities were/are, but he didn’t have the mental capacity to be able to race bikes at the top level. Even Vaughters admits this.

Jonathan knew it all along. You know Jonathan spent the last year of his career racing here in the US for Prime Alliance. I’m sure Jonathan remembers quite well the last stage of Redland’s, the Sunset loop in 2003. I remember talking to Jonathan before the start and asking him if he was ready for the explosion that was about to happen. The race starts directly up a climb to a time bonus KOM on a very hard circuit. Jonathan said he was going to do the hurting. Flash forward to the feed zone, a couple k’s after the KOM, which his rider, David Clinger (now suspended for life for doping) won. But, the problem was Nathan O’Neill, Chris Horner and Thomas Danielson, all Saturn riders, jumped the field and were already over a minute ahead. I said something to Jonathan about who was doing the hurting and he said “That didn’t work out so well.” I stayed in the field, which was maybe 30 guys, for the next 5 or 6 laps, while Jonathan, Danny Pate and a few others managed to lose about a minute every 6 miles to the trio. At the end they won by over 12 minutes. 3 riders, from the gun, in the biggest race in the country, dropping the whole field of 150 guys and winning by 12 minutes in 85 miles. Tom won that race. Remember Jonathan?

Now that I think about it, it was at least a couple guys taking drugs chasing some other guys that were taking drugs. Man, in retrospect, I sure am glad I spent my money and a couple cold winter months training for that race. Thanks guys.

I’ve ridden all over the world with a ton of very, very talented athletes. I think I’ve raced against/with 8 Tour de France winners in my lifetime. It is very easy to spot talented guys. And, every once in a while you do see the random phenom, but most of them don’t make it, for a variety of reasons. Many times it comes down to their heads. Tom Danielson never had the head to race bikes at anywhere near the level he is currently at. He didn’t have the head to race bikes at a domestic Pro level without the “supplements”. Of course, these are all my opinions. We’ll never know the absolute answer because no one gets a redo at life.

I got a lot of emails yesterday, mostly about the Danielson deal. Here’s one I got from a friend. He used to race professional on the road in Europe. Then he switched to MTB bikes.

Good piece on Vaughters and Danielson. I don’t know how it is for you, but I’ve had a lot of anger over the years at the generations that came after us. When I was a kid, testing positive was a big deal. It was just not an option, totally verboeten. Messing with drugs was never in the equation. It was always hard during the Lance years to watch the progression of guys on Postal. Makes me fucking sick to this day. To hear Vaughters talk about it so non nonchalantly, while covering his ass, charading along like everyone else…

It’s still difficult to observe public perception. This has all been a lesson in “how the world works”. I don’t believe Lance can have this both ways. Oakley, Nike, etc. simply have to step up. Otherwise, what is the message they are sending to young riders? If I was 15 today and saw their response to what is happening, I may think “I just need to dope more and be more sophisticated than everyone else”. It’s the opposite message they need to be sending. You don’t get to fuck everyone over in your sport, capitalize off of people who don’t know or don’t care what you did to your sport, then go be part of a charity to “make it all ok again”.

These companies are two-faced, and it can’t work. No one can play both sides of this.

It may be our responsibility to tell those generations that think it’s “normal” to take the drugs to snap the fuck out of it. Tell them no, it’s not normal, and it’s not “ok”. We drank Coca Cola when we wanted a ‘boost’. These guys take EPO and blame the ones who came before them for having to do it. Level playing field? Could you imagine spending $45,000 a year just to be on that “playing field”?

I wrote him back and told him that I really don’t have much pent up anger over the last couple decades of polluted cycling, although you probably would not get that impression after reading yesterdays post. I do hate how people seem to dismiss the whole issue like it was a piece of lint on their suit before a photo shoot. Many trivialize the whole matter.

Again, I watched the whole “oxygen vector” drug scene from inception to the current state. I was in the thick of it from the late 80’s, through the 90’s and now. On the road, MTB and cyclo-x. It really doesn’t take a brain surgeon to see what was going on. People keep asking me if it was/is so apparent, why weren’t you speaking up before? I believe I’ve done my share of speaking up on the subject. Obviously, here, I’ve shared my opinions. Here is a post I did a couple years ago about Thor talking nonsense. Below it there is an article I did with Mountain Bike Action in 1998. So, that was 14 years ago when I wasn’t holding my tongue. That was a pretty long time ago and I’m sick of it.

That being said, I’m not going to go and publicly accuse someone, any team or team director of drug usage just because of my strong beliefs and observations. It is too big of a deal to randomly do that without positive proof, 1st hand evidence. But, when it becomes fact, such as the case here with Danielson and Vaughters, I don’t have any problems listing my experiences and observations of the situation. I’m not bitter, although I can see how you might take it that way, I’m just stating a time line of observations and experiences over a decade.

The problem with knowing for sure is that there are those few, the Greg LeMonds out there. I witnessed what could be done on a bicycle first hand by a teenager. And seeing that, it shows me that there are very special people out there with enormous talent. I don’t know how many of them there are, but it is not that many. And watching rider after rider go through the stratosphere over the winter, by training, or by getting a new coach, or by eating a vegan diet, gets really frustrating and old. It doesn’t work that way. Cycling doesn’t work that way.

It is so obvious, yet people always want to believe. It is as obvious as, say you’ve decided to do an open water canoe race and the guy next to you shows up with a motor boat. I’m not kidding you, but it is that obvious.

Like I said above, I’ve clipped into my pedal with lots of riders that are the real deal. Much, much better athletes than I could ever be. When guys take drugs to eclipse their results, it’s an insult to the whole sport. It is why the US Congress got involved in baseball finally. Baseball is a sport where statistics are very important. The guys screwing with steroids and messing up the history of the sport were doing a dis-service to the players before them. Cheating ghosts, you might say.

It’s not quite the same in the sport of cycling, but don’t let the thought that everyone was/is doing it, so it was a fair playing field argument even exist. Not everyone was doing it. There were some guys that weren’t. They weren’t wining any races, but they were racing clean. The sport will be much more healthy and exciting if this “disease” is stopped in its’ tracks.

I think it is an important time to address it. This time, is the time for that, these next few months, when many of the heros are “outed”. We need to fix it from within. With need to say we aren’t going to tolerate it anymore in our sport. And we need to quit giving these guys the benefit of the doubt, and say it is okay. It’s not. It wasn’t since the Festina deal back in the late ’90’s. But it kept escalating. Finally we’re here, in disbelief. I never was in belief. That is truly a sad statement.

Anyway, I did go out for a nice ride on the River Road on my MTB after all the internet ordeal yesterday. I found a new road, which is maybe the first new road I’ve “found” around the city of Topeka in 3 decades. I love riding my bike. I love racing my bike. If only it could be that easy. 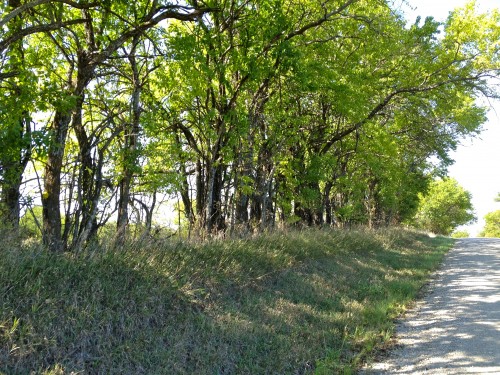 Many of the gravel roads here in Northeastern Kansas have hedge trees lining them. 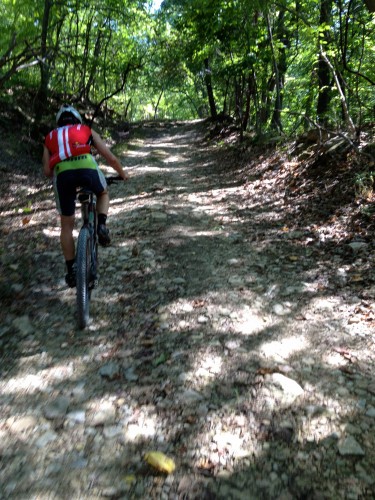 This is the un-maintained road Bill and I rode today. 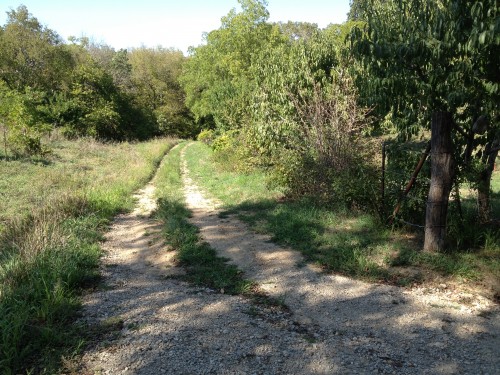 This is the entrance of the primitive road from the other end. 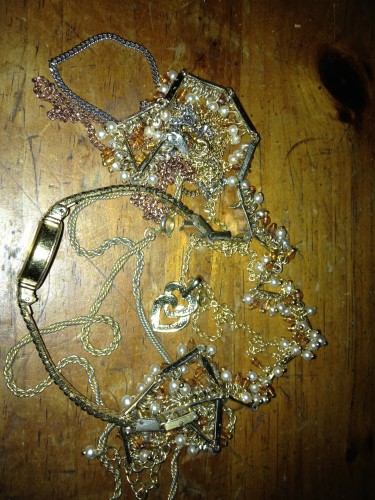 I found this wad of jewelry on the side of the road on the way home. I wonder what its’ history is?