Today’s race in St. Louis was in the Italian section of town. The race wasn’t until 6 pm, so I spent most of the late morning/early afternoon, putting a new vacuum line from the manifold to the MAP sensor in my van. Man, talk about cramped quarters. The backs of my hands are toast.

Anyway, the Italian area where we race is called The Hill. The course is good. It is on a hill, but not really much of one. Big ring for sure. The course is less than a mile around and is really just uphill on one long side and then downhill back to the finish line. I finished 2nd here a long time a go. It is sort of a good course for me, other than the sprint being downhill.

I guess the biggest issue of the day was for about 5 laps, it was spitting down rain. This course was much different than the previous 2 races and there were crashes. Lots of them. I personally didn’t witness anyone fall, but they were throwing riders in from the pit every lap, lap after lap. Lots of them.

During this time, I got to the front and took off with Menso de Jong, a Jelly Belly guy, who was pulling virtually the whole time. I just wanted to stay out of trouble. If it would have kept raining, then I would have put some real effort into the move, but it wasn’t to be.

One weird thing that happened during the race was when I was going for another $200 prime. I jumped into the third corner and went by a Jelly Belly guy who was leading Pat Lemieux, Kenda. Pat yelled for me to go, which I already was, and I had a 30 meter lead heading down the 400 meter hill to the finish line. The problem was, I have this sinus infection thing going and just when I thought everything was good, a big glob of snot dislodged from somewhere high and got stuck in my lungs. I started coughing and was pretty much done absorbing oxygen. I looked back and a couple guys were coming, so I just kept coughing and lost. What a bad time for that to happen.

The last few laps got kind of crazy. Jelly Belly put their whole team on the front and did the normal control thing. Ride the inside of the course not fast enough, thus making us all glob (there’s that word again) behind, braking and then re-accelerating. I wasn’t too worried about getting into position to sprint. I’ve done this race a bunch and knew how to get to the front the last lap. So, again, like the day before, I was concentrating on saving energy and having enough air for the last lap.

I started probably around 20th and then made a pretty big effort up the last 1/2 of the hill. There were maybe 5 Jelly Belly guys in line and I went into the next to the last corner in 4th or 5th. The problem was that the finish is really downhill I sprint like shit downhill. If I have to sit down sprinting, it is pretty much over for me. Plus, I’m not going that good anyway. So, I was passed by 3 or 4 guys before the finish line and ended up 9th. Jelly Belly had 4 out of the top 5 at the end. Here’s the Strava link for the race.

Trudi is heading to Quebec City this morning, so I have to drop her at the airport. The last race here is the hardest by far. And it is supposed to be hot and muggy. It was muggy yesterday, but not that hot. It is going to be hard to fake it this afternoon. We’re heading back to Topeka after the race, so it is going to be a long day. 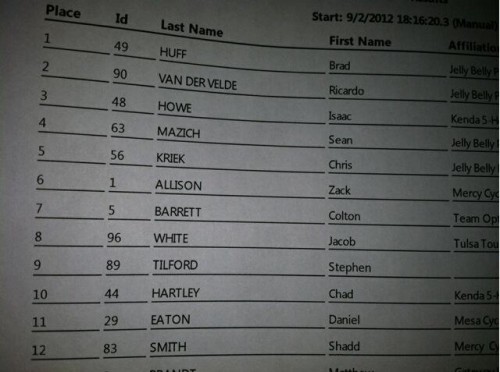 Results, courtesy of Shadd once again. 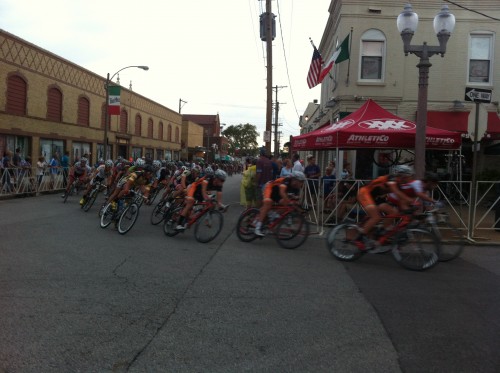 This is the 1st corner of the course. Kind of gives you a flavor of the area. 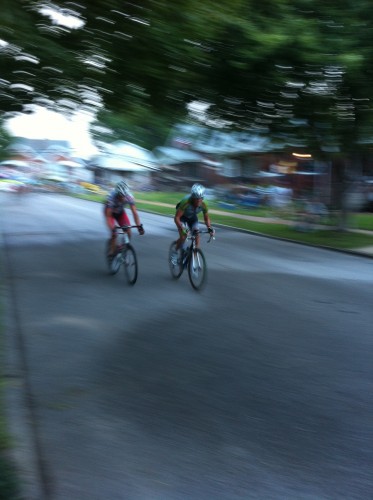 An artsy shot Trudi took when I was off the front in the rain. This was about the only time I pulled through the whole time.