I rode the Gateway Cup Criterium at Francis Park yesterday. I hadn’t raced in over a month and it is a pretty good race/course to get my feet wet. And I did just that. Bill and I rode the 18 miles from the hotel over to the race. Everything was going pretty well, great city watching, until about 3 miles from the course when we got poured on. We were only getting to the race less than an hour before it started at 5:30, so it wasn’t that bad. I had dry clothing in the van, so I changed before the race. Not that it made that big a difference because the road was so wet that we got pretty wet again once we started racing.

I don’t have much to say about the race. It is nearly always a field sprint, just like the night before. The race had a 28.4 mph average speed for nearly 90 minutes, but wasn’t hard. Here is the link to my Strava data. The course is about 2 km in length and pretty dead flat. It was pretty wet the first 3/4 of the day, but dried out towards the end. I really wasn’t participating in the event other than riding around. I did win a $200 prime, which was the biggest of the day, but that took me 15 minutes to recover from and helped dictate a bad result in the end.

The Jelly belly team was racing sort of aggressively, but they were really setting up for a field sprint. Flash forward to the last couple laps. The local young team sponsored by Gateway, Harley-Davidson, and the Treks Stores of St.Louis went to the front and set tempo for the last 3 laps or so. I don’t know who is telling them how to race, but this tactic is pretty bad when they don’t have the fastest sprinter, or a sprinter in general as far I as know. I know they didn’t finish a rider in front of me.

Anyway, it was going pretty quick the last 3 laps. I was just hanging around about 25 guys back. A big scare with a few laps to go, on the 2nd corner, the two guys ahead of me got hooked up and fell. One guy kind of high sided and and flipped into my bike. I got twisted and one foot came unclipped when his bike was in the air, coming at me. I think it hit me a couple times, but I didn’t fall. His foot or something must of hit my front brake because the quick release was flipped up and I had no front brake the next couple corners.

The last two laps, all I was concerned about was resting. I was coasting and not fighting anyone for postion, just trying not to get too buried. I realized from the prime, that I needed to be on someone out of the last corner. I knew this already because a couple years ago I led out of the last corner and got passed 10 meters from the finish by Cole House and Dan Schmatz because I was pedaling squares the last 30 meters.

Today on the last lap, I started moving up after the start finish line. I got into the top 15 on the 2nd side. I was planning on completely coasting down the small hill on the 3rd side, but Chad Hartley came by me pretty fast in the wind and I couldn’t pass up that opportunity. Chad blew by a ton of guys and took the 2nd to last corner on the inside and then seemed to hesitate. I think he was a little gassed from getting up to the front, but more importantly I think he didn’t want to screw up his team mate, Isaac Howe’s sprint. I couldn’t read what that was all about very quickly, but in the mean time, a whole line of guys, Shadd Smith and Zack Allison from the Mercy team, plus a few others were coming by us.

I was just about to pull the trigger and make my move for the last corner, but Cole House, Competitive Cyclist, came by on my left pretty quickly. Cole has finished in the top two or three the last couple years and I was counting on him to know how imperative it was to go through the last corner in great position. But, I blew it because Cole didn’t seem to have it. We went through the corner way too far back and he was the only person I passed before the finish, when he pretty much sat up. I should have realized it earlier and tried to pass a few guys, even though it would of been for nearly nothing. I ended up 11th. Everyone ahead, but Shadd, Zack and one Tulsa Tough guy, Jacob White were Pros, whatever that means?

I can’t really knock myself too much for the end result. I am really riding badly, I don’t feel well at all. I hope I ride through it some, but I am not holding my breathe. That being said, I can’t use that as an excuse for the finish sprint. I didn’t really make a mistake. When I’m sort of free lancing the end, I have to use previous and current experience in using my energy and picking the correct wheels. I thought that Chad and Cole were pretty solid choices. I know how fast both of them are, plus they usually make pretty good choices. I can’t knock Chad’s decision too much. He had his reasons. But Cole must of been toast. I didn’t see that coming.

I rode back to the hotel, so had nearly 80 miles for the day. I got just a couple miles from the course and my rear derailleur cable snapped at the shifter. How lucky was that it didn’t happen a few shifts earlier? Anyway, I had to ride the 18 miles back in my 11. Sometimes in a 53, but mostly in a 39. I rode nearly the whole way back in the dark. I loved it. St. Louis, in the dark is great. The different parts of the city at night is great. It was better than the race. 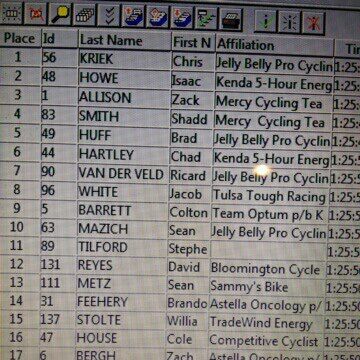 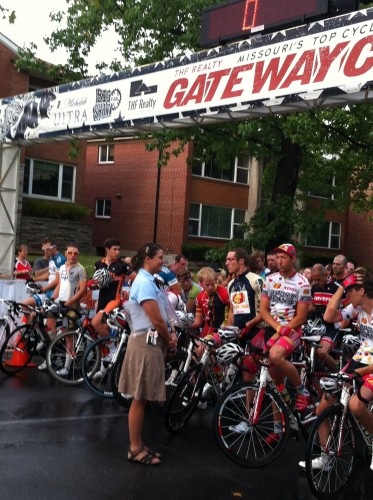 Before the start during the National Anthem. 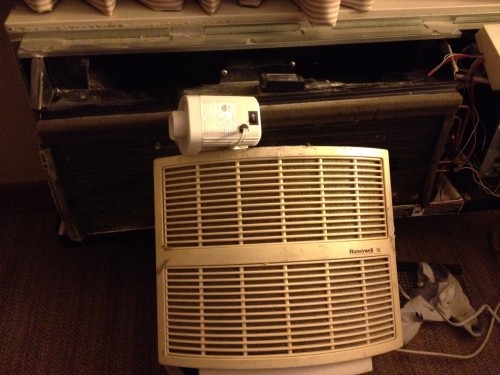 The fan in the air conditioner in our room blew around midnight. Our room was full of wet clothes and super muggy. We set up a make shift fan situation using the air purifier and also the blow up pump from the aero bed. It worked great.