Yesterday someone left a comment about me doing a local triathlon in Manhattan Kansas. It got me thinking about why I didn’t pursue the sport more. I most likely would have made a ton more money, but the fact is that it didn’t interest me much.

What is there to look forward to in a triathlon? First, you swim, which I pretty much really dislike. Especially training for swimming back and forth in a pool. Then you do a time trial on a bike, which is the segment of cycling I dislike the most. And finally you run. I don’t necessarily dislike running, I just would rather be out riding where you cover 3 X’s as much terrain in the same time period.

Plus, the time consumed training. I really couldn’t have the swim and run training cut into my cycling time, it just wouldn’t be right. So, there you have it.

I have run a few races. I probably could have been an okay runner, but probably not great. During my semester at KU, I was “training” for the annual Turkey Trot running race between KU and the Haskell Indian College, which is in Lawrence too. It was snowy, so I was running in the indoor gym. The ROTC guys were doing a timed mile in their army boots and fatigues. I didn’t have a watch and asked the guy if he could time me too. He said no problem and I got into line to wait my turn.

I don’t exactly remember how many laps it was to complete a mile. I’m thinking 7 + a little extra. Anyway, I remember thinking after 3 laps, “Wow, I’m nearly half way done, this is so short.” So I just sprinted the last half. When I got done, I asked the timer guy what my time was and he was nearly crazy. He said I ran 4:16. He was so excited. I’d timed myself before running outdoors and could run pretty easily in the 4:30’s, so it didn’t seem all that great to me. I tried much harder this time.

Anyway, he took my phone number and told me he was going to talk to the KU track coach about me. The track coach called me the next day and I went over to see him. He was pretty into the whole thing, but I told him that I was a bicycle racer and that I was going out to the Olympic Training Center to live and race bikes. That was that.

I did a half marathon once too. The Topeka to Auburn Race. I was out to dinner with a bunch of friends and it was snowy and we weren’t going to be able to ride on the roads the next day, so Catherine Walberg and I decided to run the 1/2 Marathon cold turkey. We hadn’t run a step the whole year.

It started pretty fast. Eventually I was only running with this guy Dave Halferty, the best runner I know of around Eastern Kansas. He ran around a 2:20 marathon and I my memory if correct, 1:05 for the half. I think he ran for KU. Anyway, about 3/4 the way through, it gets hilly, on gravel. Dave was “attacking me” on the hills, whatever that means, but it wasn’t a problem for me. Cyclists can run so well uphill, it’s the downhill that gets us. About 3 miles from the end, after he went hard up a hill I was beyond confident, thinking I was going to smear him at the end.

About 30 seconds later I was taking 12 inch strides. Trudi was following me on her MTB bike and kept saying, stride out, or something like that. I told her I was. It was like my legs were in molasses. I looked behind me and could see no one. But, pretty soon, a guy from behind came running by like I was standing still, which I was. He ran a few hundred meters in front on me, then went over to the snowy ditch and pulled down his shorts and pooped. I ran by him while he was having his issue. But, probably a minute later he came by, again, like I was standing still. I finished 3rd, but got beat by a guy that took a shit while racing.

I think I lost something like 4 minutes in the last 2 1/2 miles, I don’t remember exactly. I’ve never experienced anything like it since, where you don’t cramp, but just tighten up so much you can move your legs much or very fast. I had to walk backwards off curbs for a week I was so sore. After the race, Catherine told me her feet hurt and when she took off her shoes, her socks were completely soaked in blood. I have no idea how she finished, I cry like a baby when I get a small blister.

Anyway, I like the sport of cycling. I think it is the monotony of both running and swimming that dulls my interest. Cycling is never monotonous. Even the same training ride I’ve done for years never seems dull. I guess there is a reason that people pick their sports, or maybe the sport picks them, I don’t know. 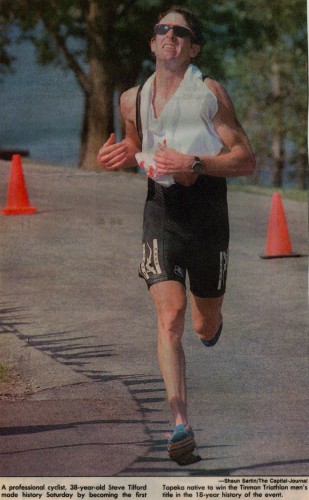 Here is the photo from the Topeka paper of me finishing the Topeka Tinman Triathlon. It might be my 2nd worst sports photo ever, the first being the pictures from the Master’s Cross Worlds in Louisville last year with my helmet falling off the back of my head.

16 thoughts on “Triathon & Running vs. Cycling”