Sunday night I went to the 7-11/BMC gala after the Pro Challenge. Trudi was going and I hadn’t seen a lot of those guys for a few years or maybe longer. There were a ton of “famous” cylists from all over the world there. Plus, sponsors galore.

The 7-11 guys got up on the stage and sat on couches and reminisced about the old days. About the first year of the team, an old communal car, and of course their recollections of first racing professionally in Europe, especially the Tour de France.

The evening was dedicated to Davis Phinney, whose son, Taylor won the last stage of the Pro Challenge that day, but more importantly is currently fighting Parkinson’s Disease.

At the end of the evening Davis had the mic and was wrapping it up and he said he especially wanted to thank me, (Steve Tilford) for attending. I thought that was really nice. Afterwards I went over to say hi and thank him for singling me out and he thanked me once again and said something about me being a true legend, which really pretty much embarrassed me.

That got me thinking about Davis and my history with him.

Davis rode for a bunch of teams before he ended up racing for 7-11. He rode for Austro Daimler Bicycles, then AMF I think, and a defunct before it started Yoplait yougurt team. He finally ended up on 7-11.

There were really 3 teams during that time, the early to mid 80’s. 7-11, Levis, and Schwinn. Nearly all the “good” riders in the country were on one of these three teams. So, obviously we bumped heads every weekend, month after month. We went to after race parties and trained with each other when we were in the same town, but really didn’t hang out much other than that.

Connie, Davis’ wife, was riding for us, the Levis/Raleigh Team, during the 1984 season. She won the Olympic Road Race that year. But, the men’s and women’s Levis teams were pretty autonomous. We had completely different support, vehicles etc.

I remember a criterium at the Tour of Texas one year when Davis and I had a little falling out. Roy Knickman, Levis and Alex Steida, 7-11 had lapped the field in a criterium in San Antonio, I think and I was leading Roy out. Back then, great team work would be one rider on your team helping you the last lap or two. Anyway, I thought I was riding like shit, but got to the front with a couple corners to go with Roy on my wheel. I got Roy to the last corner in the lead and Roy came through on my inside and I swung off to the outside. Davis was coming by on the outside and I obviously screwed up his line, very unintentionally. Afterwards, Davis, along with Connie, came over to me and our team director, Michael Fatka and proceeded to scream about the incident. I told Davis it was completely unintentional and I was just trying to get out of the way. I normally wouldn’t of even cared about the whole thing, it was just normal criterium racing, but Connie was really on my team and I felt strange having Davis and her confront me.

Anyway, that was that and Davis raced more and more in Europe, won a couple stages of the Tour and whenever he came home after that, his sprint wasn’t quite what it used to be. He was still super fast, just not unbeatable.

Michael Engleman and I spent a month or so after the 1988 Pro World Road Championships in Belgium, racing in Europe. One of the first races was in Geneva Switzerland and Davis, Steve Bauer and a bunch of other guys were there. It was pretty much for start $$$. I think the first race was a miss and out criterium, then the 2nd, maybe a points race. Micheal was riding good and was actually out sprinting Davis for point sprints. And Michael had just about the slowest sprint on the whole Wheaties/Schwinn team. It was just about then when I realized how much speed it takes out of your legs riding 250 km stages of the Tour, day after day.

Davis rode a bit on the Coor’s Light team domestically, after leaving Europe, before he retired in the early 90’s.

Flash forward maybe 10 years later, after Davis had already been diagnosed with Parkinson’s. I was racing the Athen’s Twilight Criterium and Davis was there. I’m not sure why exactly he was watching, other than someone was doing a documentary on his life and filming him. Right when the race was over, pretty late at night, Trudi came over and told me that Davis was in hanging in the wheel pit. I asked her if she had went over and said hi, but she said that she hadn’t and was a little worried because she hadn’t seen him in so long.

I rode over to the pit and he was there. He looked pretty nervous and he was having a lot of shaking and movement issues caused by the disease. It was kind of uncomfortable just talking to him. He told me that when he got stressed out and nervous, then he had a lot more problems with the shaking and tremors. There were lots of people around and I finally asked him if he wanted to go somewhere else, sit and have a beer or something. He said sure.

I was still in my skinsuit and on my bike, and Davis was walking, so we just went around the corner a block or so off the course and sat outside. It took him a little while, but pretty soon it was as if I was just talking to “the old Davis”. No shaking of the hands, no head movement, nothing.

We talked for quite a while and then he thanked me for helping him escape from the crowds, for just being a friend, and having a beer. I’m pretty positive, that I’d never just been with Davis one on one before, just hanging out and talking. It was a huge compliment to me, that he could feel comfortable enough to laugh his great, deep laugh and just be himself. I’ve never forgotten that night and never will.

If you would like check Davis’ Parkinson’s Foundation, please click here. I’m sure he would appreciate it. 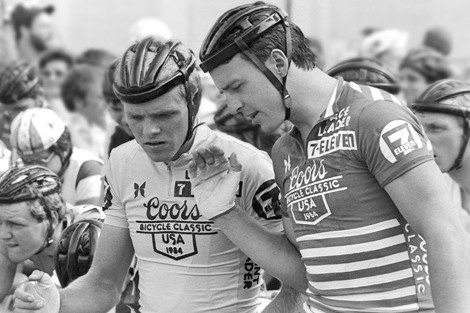 Davis and Ron Kiefel, who were nearly inseparable though out their careers. 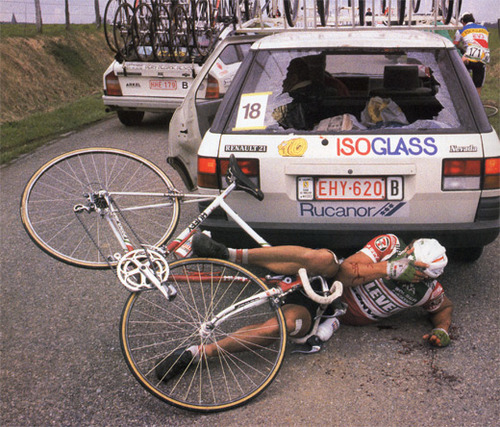 Davis didn’t crash much, he was a very good bike handler. But, this was a bad one. I remember seeing him in Boulder a while after this accident and he looked awful. He laughed and said something about how it he thought it made him look gnarly or something like that.