I’m in Silverthorne again and Trudi just left in a BMC team car heading back to the service course in Santa Rosa, CA. It is something like 1200 miles depending on which way she goes. There really isn’t a true direct way to drive though.

Anyway, I was thinking about all the costs incurred in the modern cycling era for the travel of these teams. The number of trucks, buses, cars each and every team has at every event seems overwhelming.

This isn’t even counting the flights. Think of this, every time a rider quits a race, he needs to go home, he doesn’t travel with the race anymore. So the team has to buy the rider a day of, one way ticket, or maybe if they are lucky, just pay a change fee to get the rider home earlier. But, the former is most likely the case in bigger stage races, such a a Grand Tour. Can you imagine the costs for that? Especially when the travel is intercontinental.

I’ve had to do this a couple times in my life. Once when I was racing the British Milk Race and hit a car at 100 kph. The other time was when I was riding the MTB version of the Tour de France, the VTT, and I fell and broke my hip. Both times the airlines made special arrangements for me, flying me directly back to the US/Kansas City, both times first class, free of charge. I guess it was a different era then. Service and compassion, back then, was more the deciding factor than the bottom line now.

Anyway, Trudi has something like 20 hours to drive and it is just one of 5 or 6 vehicles heading somewhere in North America. They have to have their vehicles in Canada for the two UCI races in Quebec City and Montreal next week. Lucky she doesn’t have to drive there. 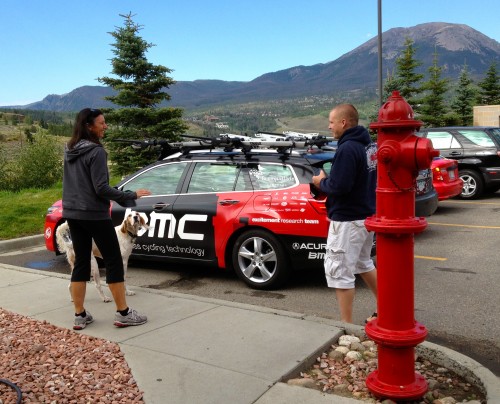 This guy was taking a picture of the team car at the Starbucks in Dillon this morning and Trudi gave him a hat. 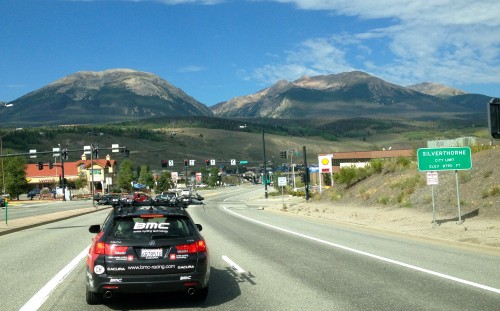 About ready to head West towards California. 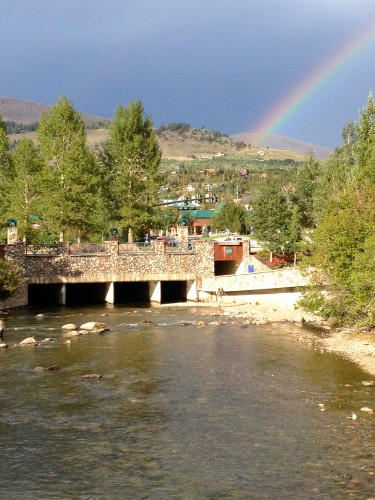 This is a rainbow that I saw yesterday while walking along the creek in Silverthorne.