Okay, I lied, tomorrow for the Vaughter’s thing. I don’t have enough time and/or energy right now. I’m in Minneapolis, driving down to Des Moines to go to the Iowa State Fair this afternoon. I’m still feeling out of sorts. I might need to go to the doctor, as much as I can’t stand seeing doctors.

Yesterday I drove from Dennis’ to Minneapolis. I went out for a spin on the bike paths. The town is unbelievably bike friendly. I decided to ride over to Grand Performance, a bike shop owned by a friend I used to race against a long time ago, Dan Casebeer. It was late afternoon and I didn’t actually expect Dan to be around, but he was. I’d never been to the shop and it was super cool. It was exactly the opposite of the sanitized shopping mall bike shops that are common now. It was in a old building in a residential neighborhood. Old wool jerseys and cool stuff everywhere. It was nice catching up some with Dan.

Anyway, I was looking around when Pat Lemeiux, a buddy and Kenda Professional rider, walks up. Turns out he lives upstairs with his girlfriend, Gwen Jorgensen. They are dressed and are just heading out on MTB bikes for a lap of the city. Gwen had just stepped off the plane from the Olympic Games in London. She competes in triathlon. I guess she had pretty bad luck and flatted on the bike portion and got a shitty wheel change and finished in the 30’s. She has only been competing in the sport for 2 years and made the Olympic team. Pretty unreal, huh? I guess she was a swimmer, then a Division 1 runner in college before starting triathlon. And she has a VO2 max of 83. Again, unreal.

So, we did a lap of the city. It was good catching up with Pat. He’s been pretty much on the Kenda criterium hit squad all season. He had just put together a new MTB bike and was checking it out. Gwen is sponsored by Specialized and had a brand new Specialized MTB bike. She didn’t know how to shift it, which isn’t surprising one bit. Pat is racing Chequamegon next month. A couple year’s ago, both Pat and I flatted out of the front group about half way through at the very same time. It was frustrating.

Okay, you have to pay for internet at the hotel, so I have to find somewhere to post this and getting moving south. I love state fairs, especially in agricultural states such as Iowa, Wisconsin and such. I’m going to try to track down Michael Fatka in Ames. We usually go to the fair together, but sometimes he is elusive. 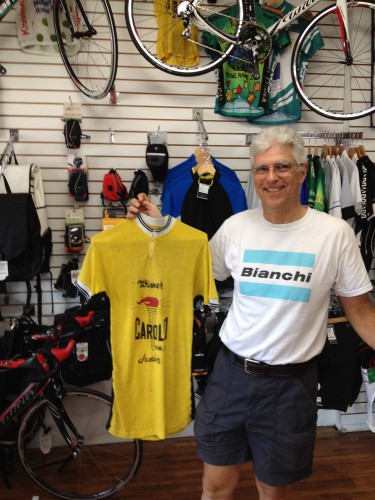 Dan holding his winner’s jersey from the KU criterium from 1976. Might have been the first time I raced with him. 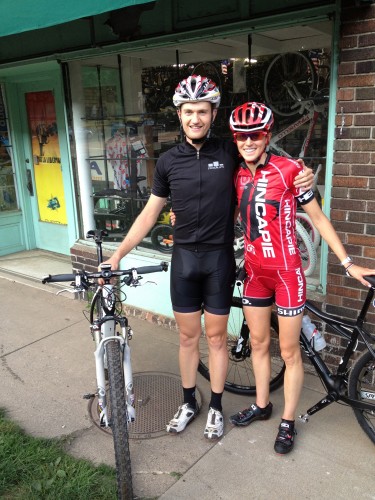 Pat and Gwen after the ride. They live up above the shop. 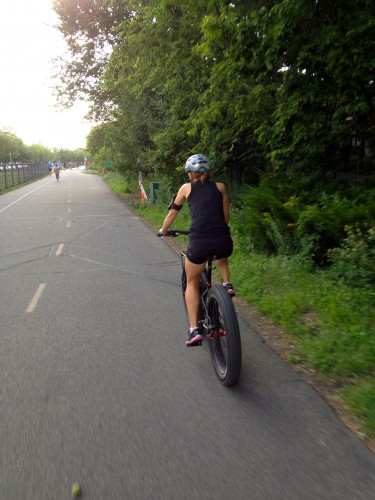 Not that unusual of a sight on the bike paths of MSP.