I was riding back from Lawrence the other day and made a stop at a convenience store only 10 miles from home. I hate those stops, but since it has been so crazy hot, I’m starting to get used to drinking a ton of cold liquids and since I was in no hurry, I did it.

I was sitting there drinking a Gatorade when a guy comes walking out of the store with a bag of ice. He says something about it being pretty hot to be out. And then he asks me where I was going. I told him that I’d ridden over to Lawrence and was coming back to Topeka. Then he goes into a story about a time when he rode to Lawrence.

He told me that when he was 9, he ran away from home with his older brother, who was 11. They got on a Schwinn Stingray and rode the 30+ miles, him on the handlebars, facing and pedaling backwards, and his brother on the seat pedaling normally. He said he had no idea how long that took them, but that was as far as they got. I said something like that was a very long ways to go riding like that, plus it was super far for running away from home at that age. He agreed.

Why this story resonated with me was because my brother and I used to ride this way. I’m not sure why we did it because we both had bikes. I had the Stringray. My brother usually had a Collegiate. We went through a ton of bikes, most being stolen within a year or two. But, when we really started “breaking the rules” and straying outside our set perimeter of our parents, we rode this way. I was on the handlebars and he would ride normal.

This was the way we rode when we started to really explore the city of Topeka. We rode all the way down to the river, which was maybe 3 miles from our house. We found a dirt jump track at a park that was way out of bounds for us. We kept all of this secret from our parents of course. But, this was the time that I really started loving the aspects of riding a bike, not just for the transportation benefit, but for the exploration and new frontier aspect.

I’ve never stopped having that feeling. Riding a bike in a new place is always great, even when I just end up getting lost in a business park, seeing new terrain is always good. And when I’m somewhere where I don’t have the ability to ride, I always wish I had my bike, or the time, to explore.

I asked the guy at the convenience store when was the last time he rode a bike. He said he hadn’t ridden one for years and years. I told him he should try it again, it might surprise him. He said he had a bad knee and was too old, that he leave it to young guys like me. I asked him how old he was and he said 48. I held my tongue and told him he had plenty of time and maybe next time he saw a bike laying around, he should take it for a spin. I think I caught a thought, through his eyes, that he might just do that. I hope I was right.

Trudi just told me that her nephew, Parker, was riding his bike from his home in Glen Ellen up to Delavan Wisconsin this morning, alone. It’s 80 miles. I hope he has a great time and enjoys the scenery. I wonder if he’s riding his single speed? 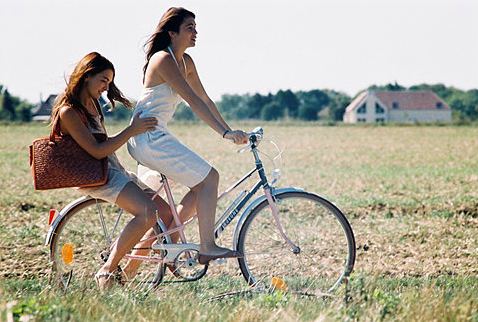 We don’t see this much here in the US.

And don’t forget the opening ceremonies for the Olympic Games tonight.
Here’ a link to Podium Insight where they have all the schedules for the cycling events and links to where to watch them on the internet.

7 thoughts on “Exploring Double on a Schwinn Stingray”