I have been watching the Tour everyday and still can’t believe how often, nearly always, a break of 4 or 5 guys ride in double echelon instead of single. Can anyone come up with an answer for why they do that? I have two answers –

1. They ride in double echelon because they want everyone to do nearly the same amount of work, so they are willing to sacrifice extra energy and time by riding in a square.

2. Most the guys never ride in a break and they don’t have any idea how they should ride to use the least amount of energy and ride the fastest.

I can’t think of any other answers. Anyone? Yesterday, I can’t believe after Luis Leon attacked Gilbert, Sagan and Co. that the remaining four kept rotating in a square, double echelon. So, 2 out of 4 riders were in the wind at all times. So, in theory, they were going just as fast as if two guys were chasing, and they were riding single echelon, obviously. I wonder if we’ll eventually see a 3 man break riding in double echelon. That’s the only thing I can think of more stupid than 4 guys riding it. Then, each rider could be in the wind 66.6% of the time and sitting in the draft only 33.3%.

Not even in a 9 rider TTT, do we see team ride double echelon. There is a different reason for this, mainly allowing different riders to sit at the front, in the wind, for longer periods of time and at different speeds, but it is still an example of why people ride single echelon to go fast. A 9 man double echelon would work fine normally in a break when everyone isn’t drilling it, but once there is a big diversity in abilities and speeds, then it has to go back to single echelon.

And what is weird and amazingly right is that the guys in the field that are trying to control the field, and usually catch the break, they nearly always ride in a single echelon, leaving a rider at the front for long periods, going the speed that suits him. So, you have a break, riding inefficiently trying to win and the field riding efficiently. No wonder so many breaks fail to make it to the line.

And as long as we’re talking about yesterday final break, what’s the deal with the hand position that Sanchez was using at the end. I’ve seen a few other guys doing it? I really don’t get the weird hand positions. The one that Luis Leon was using doesn’t make any sense. I can sort of understand the aero bar, no hands on the bars style, but to wrap you hands around your brake levers backwards, is dumb. Why not just put your hands over your brake levers the normal way. You’d have way more stability and control. I’m wondering if he thinks he’s getting more aero in that position, maybe he thinks his arms are narrower. It doesn’t seem like it. I’m worried that there are a bunch of young guys out there honing their skills at this new technique right this very moment. Heaven forbid. 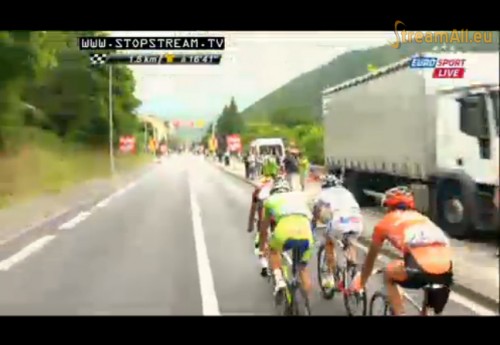 The remaining 4 from yesterday’s break, chasing Sanchez. Doesn’t surprise me that they didn’t catch him. 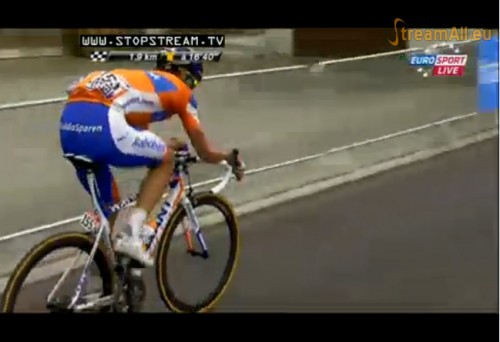 And, Luis Leon’s hand position. Do you think he sometimes trains with his hands like this? That would amaze me.