I’ve “known” Sean Kelly for decades, not that he would know me by name. I’ve actually raced against Sean a few times, back in the day.

The first time I had the pleasure of meeting Sean was back in 1986. I was living in Switzerland, doing cyclo-x. I got picked up one mid-week morning, to my surprise, and was driven to Brouilly, France for a cross race. I had no idea that I was going to be racing that day because my sponsor, Roland DeCoster, and I had a language barrier. Anyway, upon arriving, I was told that a bunch of the the European road professionals were on the start list. Sean Kelly was the name I saw first. He’d won a ton of races that year, including Paris-Roubaix and Milan-San Remo, I think. Anyway, he and Jean-Francois Bernard, Tour of Mediterranean winner, were the headliners from the road side.

I had driven there with Pascal Richard (1988 World Cross Champion and 1996 Olympic Road Champion). I remember the first glimpse I got of Sean. It was at the pre-race meal. Those were the times when the races would serve the “special” riders a big mid day lunch as part of the participation rewards. I couldn’t believe these guys could eat a big steak less than 3 hours before a cyclocross race.

The course was at a winery and there was a ton of vertical terrain. Very technical. Anyway, I watched the road guys pre-ride the course I realized very quickly that they were going to get smeared. They could hardly ride their bikes down the steep, loose descents. Anyway, the race started on the pavement and Sean Kelly took off like a crazy man. I was in 2nd, barely able to hold his wheel. The first barrier was going to be tricky, coming off the road super fast. I had never seen Sean dismount, so I moved over to the right to give him plenty of room to dismount and get over the barrier. But, to my surprise. Right when I started stepping off my bike to the left, Sean jumped off to the right. He threw his body right in front of me and I fell. I’m pretty sure he didn’t fall, because I remember watching him run with his chainrings digging into his back. I guess he’s left handed. I eventually caught up and beat him and all the other road riders that day.

I didn’t run into him again for two or three years, when I was riding professionally for Wheaties/Schwinn and was doing a big race up in Toronto. The promoter had brought over a lot of superstars from Europe, including Sean. My team mate, Alan McCormick, from Ireland, and I were in front of the hotel when the bus pulled up from the airport with the Euro guys. Sean comes out and Alan goes over to say hi. Alan introduced him to me and then they talked for a few minutes. Alan was speaking his normal Irish/English and I couldn’t tell you what Sean was speaking. I couldn’t understand a word he said. It was such a weird conversation to witness, Alan talking normal English and Sean answering back in what I thought was Gaelic or Celtic. After Sean left, I asked Alan if he spoke Gaelic and he told me that Sean was speaking English. I couldn’t believe that, I understand nothing he said.

Sean never came over to the Coor’s Classic, Tour of the Americas, The Dupont Race or any other big Pro races in the United States, so I don’t think I raced him again. I’m pretty sure I never raced him on the road in Europe, but don’t hold me to that.

Anyway, I sort of forgot about Sean until he started commentating for the BBC, I think, at the Tour. Again, I could hardly understand him, at least the first couple years he did that. Now he is doing the color commentating for Euro Sport. He has gotten much better and I truly enjoy listening to him, though he’s a little monotone for my liking.

I’d always been a little hesitant of liking the guy too much because of what he had said early on about drugs in the sort. When all the Festina and other scandals starting constantly happening, Sean would always just say that there have always been drugs in the sport and he didn’t see it any worse or better than it had been historically. I thought he was being naive if he truly believed that. I didn’t think he was intelligent enough to realize how good all these oxygen enhancing drugs were.

Anyway, I was surprised to see that Sean called Bradley Wiggins “mentally fragile” in an interview with L’Equipe. I was even more surprised when he used the example of Bradley’s crazy rant as an example of not keeping his cool under pressure.

Sean said, “A journalist dared to compare the strategies of team Sky with those of US Postal. [His reaction] proves what I said: he loses control of his nerves quite quickly.”

“The analogy is obvious. Team Sky at this Tour undoubtedly races like US Postal. Then, it depends on how you interpret the comparison, but that’s part of the game, and Wiggins will have to get used to it. As soon as a rider dominated, he becomes the subject of all suspicions and that’s unfortunately part of cycling today.”

I was pleasantly surprised to have underestimated Sean’s intellectual capacity all these years. To win all those classics he has won, he must be pretty shrewd. He’s going to be just that much more enjoyable to listen to the rest of the month. 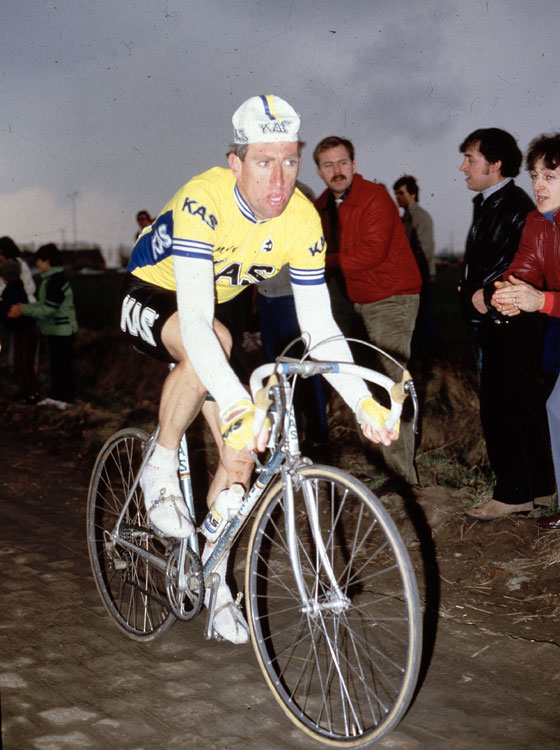 Sean Kelly, a true hard man for the classics.

15 thoughts on “Sean Kelly and me”