I saw a comment yesterday from my friend Rod Lake about how cool it is that we have so many options now to follow the Tour and cycling in general. I couldn’t agree more. I’ve personally witnessed this evolution since the, almost embarrassingly to admit, the early 70’s.

When I was in junior high, my brother and I used to go to the Topeka Public Library and look at the London Times, to see how Eddy Merckx was doing at the Tour. The deal was that the library didn’t get the paper until close to 3 weeks after the race. So, we’d be reading the play by play in August when the race was already over.

Then later in the 70’s, early 80’s, it was absolutely necessary to be in Boulder during the Tour because the Daily Camera wrote a daily article on the Tour. During this same time, CBS would do an hour recap on the weekends of the weeks events at the Tour. Usually it was a 45 minute travel show on France and 7 minute bike race recap.

Sometime later in the 80’s, Velonews started the day of, coverage, with Bob Roll doing a recorded phone recap that you had to dial an 900, pay by minute number, and then listen to the results of the race. That was the first you could get the results the same day.

Soon after that the daily TV coverage started, it was never guaranteed that any channel was, for sure, going to cover the race until right before the event. Traveling to races, the hotels were always chosen by if they had Versus or whoever was doing the event.

Now we can get it a zillion places on the internet, in about any language you can imagine. Plus, the NBC sports is advertising that they are covering the Tour until 2023 I think. Man, that is a pretty long contract for a sporting event.

I’ve been following the Tour for a very long time. I’m on the fence about a lot of “progressions” this information super highway has created. But, the Tour coverage is definitely a huge plus and A-okay with me. 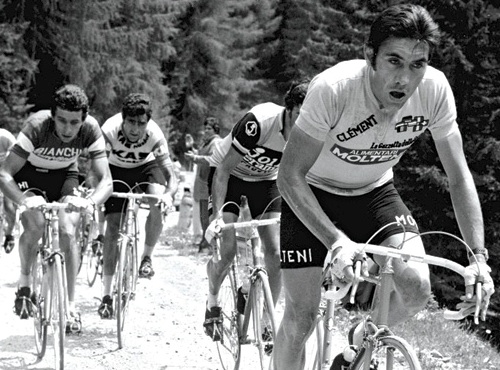 The best there ever was.

There was a super Cat. 5 out training one day and he hit a pot hole, flipped over the bars and that was it. Upon awaking he had no idea where he was. All of a sudden he realized he was at the Pearly Gates and Saint Peter was there. He said welcome and you’re not going to believe the “training facilities” we have for you. Heaven is a bike racer’s dream.

St. Peter proceeds to show the Cat. 5 rider around. There is a exercise physiology lab. You can race everyday of the week, road, criterium or time trial. There is a training ride leaving every hour, 24 hours a day that goes any speed you like. And the food is unreal, a buffet with fresh juices, anything you could imagine.

The rider is ecstatic. St. Peter takes the rider over to show off the new indoor velodrome. There is a rider hauling around the track and then the Cat. 5 realizes who it is. He says to St. Peter, “Man, I had no idea that Eddy Merckx had died.” Saint Peter replies, “No, that is God, he just thinks he’s Eddy Merckx.”

3 thoughts on “Following the Tour de France though the Ages”