It is really hot here in Kansas. Actually, I heard it was the hottest spot on the planet today, at 115 degrees in Hill City, but I couldn’t find anything to confirm that on the internet. I’d bet there are hotter places on the planet, just that there aren’t any people/cities/thermometers there to record the temperatures.

Here’s the report for Hill City, Kansas – The report of 115°F (46.1°C) in the current hour at Hill City, Kansas ties yesterday’s all-time June record high temperature. This is the 5th consecutive day of 110°+ temperatures at Hill City. The precipitation so far this month of 0.42″ is only 17% of the June average in this drought-stricken region of the High Plains. Hot and dry conditions are expected to continue through the remainder of the summer.

Anyway, my heat acclamation training was just so/so this week. I made it to Lawrence only once during the heat of the day. I rode just an hour and a half today at 106. I didn’t feel bad pedaling at 20 mph, but whenever I went uphill I got super winded. My Garmin was reading around 113 all day. I think it was because of the heat coming off the asphalt. I took it off my bars and put it lower and it went up a couple degrees in just a minute.

I used to not mind the heat. I didn’t really think about it. One of my first races, I went down to Arkansas City, Kansas, near the Oklahoma border. I was an intermediate, 13-14 Junior, nowadays. My friend, who pretty much got me into bike racing, Ed Bauman, drove Kris and I down there in his VW pickup truck. (Now it’s my VW pickup truck.) Ed is older, so he was racing the 1-2-3 race. Kris raced the junior race.

It was super hot, like hot now here. I got 2nd to David Winbray, who was from Tulsa, I think. He beat me at at least the first two races I did, then I think I beat him a few times until he quit racing pretty early.

Anyway, when Kris and I were done, we went out to find Ed. He was riding by himself, in third place. He wasn’t too good though. He was having what he called, “Charlie horses.” I call them cramps, but whatever you call them, it is horrible. Anyway, he was pretty close to the finish line and he completely cramped up and couldn’t pedal. He eventually came to a hault and fell over. He hit the asphalt before I could get out of the pickup and catch him. When he hit the ground he started screaming madly. I was running over to him, but was barefoot. I just about made it to him, but my feet were burning and I had to run back and jump into the pickup. I don’t remember if Kris or I helped Ed to get going, but he was toast. His skin was all burned from the road.

Anyway, I don’t remember how Ed finished. I’m thinking 3rd still, but don’t quote me on that. We were driving home and it was so, so hot. Kris and I were switching off riding in the back with the wind blowing over us. The cab was unbelievable hot. Ed pulled over in some small town, I thought to get gas, but when I looked up he had stopped at a Dairy Queen. We only had, maybe, $4 with us. I though we were using it for gas, but once we stopped there, the money was gone for cold desserts.

We stressed all the way back to Topeka, running on fumes. Ed ran out of gas right in front of our house. He got on his bike and rode home. That wasn’t that unusual back then. Just the way it always seem to go.

Anyway, the Tour of Lawrence officially starts tonight with street sprints downtown. I think it is only supposed to be 102 today. Tomorrow, the circuit race on the KU campus, which is a very hard course, it’s supposed to be 106. That is going to be ugly. Then a cooling tread for the criterium on Sunday, only 100.

My shoulder is pretty valueless for sprinting, so I’m probably just going to go there and watch. I’m sure the standing around will do me good. It’s going to be another humbling weekend. 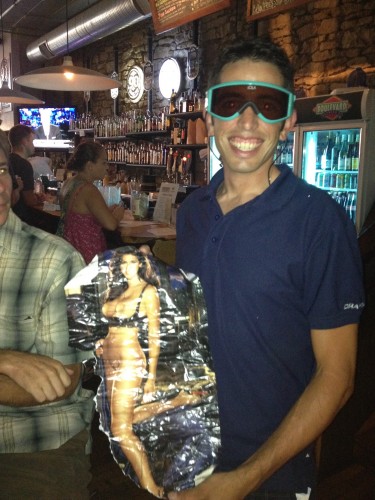 I went down to Lawrence for Adam Mills‘ bachelor party. This is just at the very beginning. Matt, on Adam’s right, had just given Adam a huge stack of $1 bills. I don’t know where those ended up, but I’m sure it got ugly. I got feeling weird in my stomach pretty early and ended up just driving home. I ended up painting the living room. 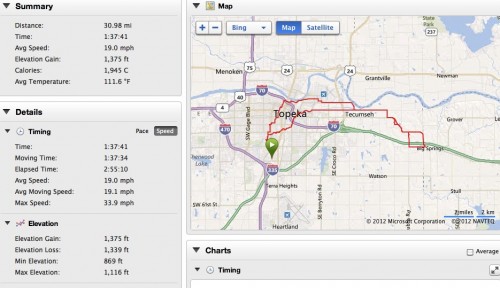 Here's my ride off my Garmin today. Notice the average temperature, shit. 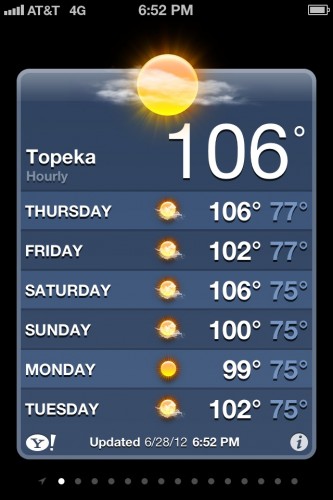