I was out riding yesterday, doing the Kitchen Creek Climb, east of San Diego and someone mentioned that there was a criterium in San Diego today. That was pretty early on the ride, so I took it pretty easy the rest of the day, thinking I was going to be racing today. It’s kind of hard taking it easy with 7000 feet of climbing and lots of wind and heat, but I did pretty good. Last night I was searching for the race and didn’t find anything. Nothing but Nevada City. When I saw that I thought, perfect, I can ride Nevada City tomorrow. But I wasn’t being realistic because when I checked it out on Google Maps, Nevada City is 550 miles from San Diego.

I’d like to do Nevada City again. I haven’t ridden it in close to 30 years. I know that Lance put Nevada City back on the map in 2009 when he and Levi came and beat up on everyone. I thought that was sort of bullshit, Lance, Horner and Levis, a bunch of Pro Tour riders, flying in on a private jet to beat up on the locals. Lance was wearing a Livestrong jersey when he was racing on a Pro Tour Team for some reason. But I know when you need to race, you’ll do about anything to toe up to the start line. (It was one of his, like, 9 race starts that year before the Tour.)

Back in the 80’s, Nevada City already had it’s name. Greg Lemond had won the race 3 times in a row, as a junior, and that was enough in itself to make it important. The race has been going on since 1960 or something crazy like that. I’m not sure I can think of another race with that history.

I went to Nevada City in 1984 with Greg Demgen and Andy Hampsten. It was the day before the start of the Olympic Trials in Spokane Washington. The promoter had arranged a flight for a bunch of us so we could do the race and still make it up to Spokane. Jeff Pierce, Dale Stetina, Alexi Grewal and a few others were on the same program.

The race was unreal. You can’t imagine the number of spectators there. I remember reading the article on Lance winnng in 2009 and seeing the photo and realizing that at least twice as many people were there in 1984.

I have a million memories from the race. It was one of the best days I’ve experienced racing a bike. Andy and Greg both got off the front in a group of 5 or 6 I think. Alexi, Jeff Pierce, Dale and maybe a couple others. Andy was riding good and he was the guy we wanted up front. I was riding around in the field as it got smaller and smaller. Pretty soon there wasn’t hardly anyone left.

The break eventually came around and lapped me. By then they were pretty beat and I felt alright. I was sitting on the back of the break on the descent through town, with a few laps to go. Jeff Pierce was leading down through the bottom corner, did something wrong and fell. He took everyone else out except for Greg and me. I stopped because Andy’s was laying on the ground. I helped him up and pushed him to get him going. Alexi didn’t really fall hard, got going quickly and was a few hundred meters behind Greg.

When I went back to the corner, after pushing Andy, I couldn’t find my bike. It wasn’t there. I asked a spectators what happened to it and finally had to go under the rope and retrieve it from behind the, 10 deep, crowd. By the time I got going again, Greg was already coming around to lap me. Greg had lapped the whole field, other than the break at least once by then and most of them twice. Anyway, when Greg caught me, Alexi was only a stones throw behind him.

The climb is so steep there isn’t much you can do other than pace someone up the hill. Greg was hurting pretty badly and wasn’t that confident with Alexi charging up. I calmed him down and got him on a good tempo for the last few laps. I’m sure it completely demoralized Alexi, seeing Greg and I hook up, even though I wasn’t doing much of anything other than giving Greg some verbal advise. Whatever the reason, pretty soon, Alexi wasn’t to be seen.

So, I got to ride around the last few laps with Greg as the crowd went berserk. The photo below is of the finish. In the meantime, Alexi got so demoralized, he lost his focus and was just coasting down the hill to the finish the final time. Andy had been chasing him the whole time and put in a huge effort and blew by Alexi just before the line. Alexi didn’t even see it coming. So it was a 1-2 finish for the Raleigh Team.

I ended up getting a place, even though I was 2 laps back and I won the special prime for the fastest time in the speed trap, which was huge $$$$$. I had extra time on my hands, waiting to get lapped, so did a bunch of resting and sprinting each lap to get the fastest speed.

Greg got a really cool medal, handmade out of 24K gold. It was 2 ounces. He was having a problem accepting the fact that if he wanted to keep the medal, he needed to take it out of his split, since gold is a really the same as money. We’d made so much prize money between the 3 of us, it worked out alright. (I’m going to email him and ask him to send me a picture of the medal.) When we got up to Spokane and were doing the splits, I felt pretty badly for Roy and Thurlow who had opted to skip the race because it was just the day before the individual time trial. They both made the Olympic team for the team time trial (and finished 3rd), so it worked out best for everyone involved.

Anyway, that day was one of the reasons I still race bikes. There is no way to replicate that sort of experience without being right there in the middle of it. It wasn’t just having a team mate win the race, it was the whole experience. The return trip back to the airport, probably missing the flight until Andy got everyone organized, the crowds, everything. I wish I would have organized a little better here. I would be riding around circles this afternoon up in Northern California. I hope some of the guys doing just that, have some of their lifetime experiences today, allowing them to enjoy the next 3 decades as much as I have. 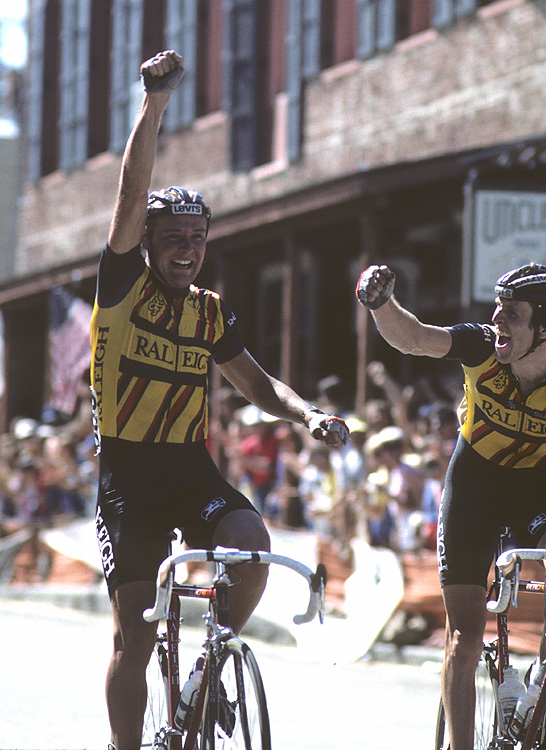 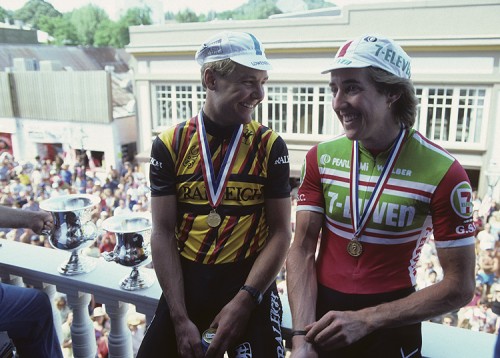 Greg and Ciny Olivarri with their two ounces of gold. 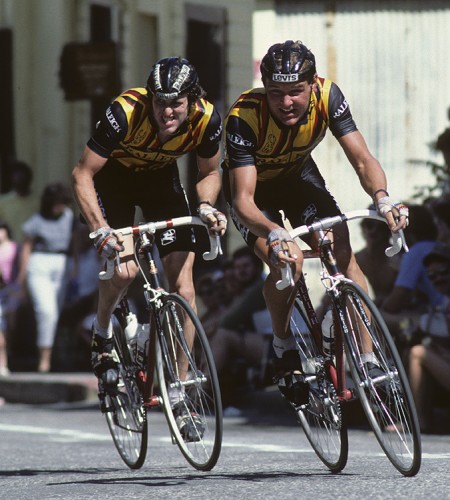 Greg looking way more composed than me late in the race.