Yesterday I rode around 100 miles. It was actually 98, but I didn’t have the time to ride the extra 2. I would have, just because I hadn’t done a three digit ride in such a long time, but was at the repair shop for my van at closing and had to pay and pick it up.

The guys at the repair shop were into building race cars and were pretty interested in my bike. They couldn’t believe how light the bicycle itself was or the wheels. They were probably used to hauling around old steel Schwinns, so my bike was a shock to their knowledge. Anyway, when a guy asked how far I had ridden and I told him 98 miles, he couldn’t believe it. He kept going no way, over and over. He said lots of things, one about my ass and others, but one thing I remember is something about monotonous repetition.

I never considered it much, but I think that to the layman, cycling seems like it is all about repetition. Monotonous, I don’t know if they think that, but this guy did. Anyway, that is exactly the opposite of how I view the sport.

The only repetition is of the pedals going around and around. I figure I’ve ridden somewhere around 500,000 miles. With an average cadence of 90, that makes close to 150,000,000 pedal revolutions. But, what he doesn’t realize is that it is second nature. Nearly an extention of my body.

I rode out a road here in Topeka named Burlingame the day before yesterday. I’ve ridden the road probably close to 1000 times. For the first few years riding, it was nearly the only way I ever left town. Anyway, I never tire of the road. Cycling allows me to witness change first hand. The same road over and over again is never the same. The seasons change, the fields mature and recycle. I have been watching this new baby horse grow the last few weeks. Around every corner there is something that is the same, but always a little bit different.

This doesn’t even take in racing. Racing is hardly ever close to the same. I’m not much into redoing a race two days in a row, like I did a month ago in Dallas. That is just from a personal perspective. I don’t like to compare how I feel one day to how I feel the next day on the exact same course. But that wouldn’t mean the race is the same. Put the same 100 guys in the same race day after day and you’ll never have the same results. It is impossible. The dynamics of a bicycle race are unique only to that race, never to be repeated again. That is one of the thing that keeps me interested in the sport. The ever changing evolution of it makes it exactly opposite of monontous.

But, to realize all the little nuances and minute differences in each and every race/ride takes quite a long while of observations. It is one of the things that makes the sport so wonderful. 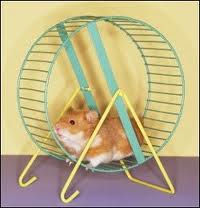 Is this what the average uninformed spectator sees at a criterium of 60 laps or more.