Crashing bicycles has gotten astronomically more expensive the last decade. I think it is the invasion of carbon into the sport. First the wheels, now nearly all the frames are carbon. Carbon is great for racing. Pretty light, pretty strong. But it is really brittle. Like, just sneeze at it and it catastrophically explodes.

I thought and still think that I got out of crashing last Thursday relatively good. I am not hurt really badly and I thought I didn’t destroy too much equipment, other than my helmet. My wheels, shifters, derailleurs, and frame seem okay. But after checking it out, it was a little more damage than I first thought.

I think when I got my left foot out of the pedal and on the ground, it somehow pushed the cleat through the carbon sole of the shoe. So the Shimano shoes are ruined. The only ding on my bike equipment is my saddle, a Fi’zi:k Arione. Plus my helmet, of course. That really isn’t too bad.

That is until you start adding up the retail cost of the stuff. The shoes are $379 at Colorado Cyclist. The saddle around $150. The same with the helmet. Then add in the skinsuit, the jersey, the gloves and bar tape that is gone. That is close to $900-$1000, plus tax, if you bought it all retail. That is unreal.

I don’t want to go into the “Steve, you’re out of touch with how much cycling equipment costs” thing again. I have admitted, that is somewhat the case sometimes. But, it is completely out of line with what it used to cost for the same items.

I paid $380 for my first racing bicycle. It was a LeJuene and I got it in Kansas City at a bike shop in Crowne Center. It was a 531 frame, all Campagnolo, with tubular tires. I was making about $5 to mow a yard back then. So if you put it into yard mowing terms, it took me about 76 mowed yards to buy the bike. I asked around and most kids around here get $25 to mow the same yard. So, 76 x $25 and you get $1900. That hardly gets you a good set of wheels with tires glued on them, let alone a race bike.

I’m not saying that you can’t get an okay used bike to race on for 2K, but it wouldn’t be comparable to the new, all Campy, LeJuene. I ruined half that much in equipment and didn’t really destroy that much. In lawn mowing terms, between the shoes, helmet, seat, and clothing, it probably would of added up to around 20 lawns when I first started riding. But in today’s dollars, it is closer to 40 lawns. Twice as much work to buy the same replacement stuff. It seems pretty plain and simple that it is just much more expensive to race bicycles now than it used to be.

And I’m not even taking into account the medical costs. It is going to be ridiculous, as all emergency room visits are.

I thought I was doing okay, but then two nights ago and then again last night, I couldn’t get comfortable and slept less than 4 hours. It was just subtle movements that would send a shooting pain into my shoulder. It’s a drag. I have ridden close to 100 miles the past three days. I can’t climb out of my saddle. I try, but it isn’t working. Fabian Cancellara is having the same sort of problem. Here’s his quote- “The broken collarbone was one thing, but the damage around it was greater than expected. The shoulder, ligaments, muscles, everything was lost,” Cancellara said. “After the surgery I was hopeful. The pain quickly disappeared, and within a week I was off medication. Everything was going well, but then I began to feel something in my shoulder. On Monday, I had another scan done, and they found a tear in a ligament.” He goes on to say how jacked up his back feels, etc.

In theory, I don’t have any ligaments attached, so I guess it’s okay to whine a bit. My back is jacked up too. And I’m not even addressing my neck here. It is funny how you compensate when you’re trying to protect something hurt. Anyway, I’m hoping I’m going to be able to ride out of my seat within the next couple weeks. Hopefully sooner, so I’m staying pretty optimistic. I’m so sleepy all day. At least I have a reason for that now that I’m not sleeping at night. I don’t know why it took 6 days before that set in? I hope for that to be done by today.

Guess I’m not going up to Iowa City to race this weekend. That’s a drag. I love the races, the criterium course especially. Plus it is great staying with Jeff Bradley for the weekend. We’ll have to catch up later on I guess. 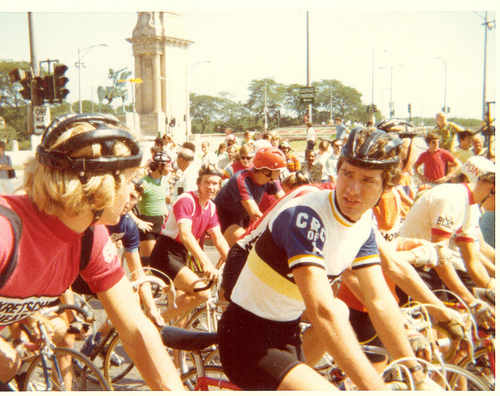 A hairnet and wool jersey were less expensive way back when. This is a picture of my friends, Jeff Bradley and Mark Gorski at the 1978 Boul-Mich Criterium in Chicago. Jeff went on to race the Tour de France, among other things and Mark won the Olympics in sprinting on the track, among other things.

16 thoughts on “Crashing then and Now”