Riccardo Ricco, aka the Cobra, was finally removed from the ability to race bicycles yesterday, by receiving a 12 year ban from the sport for autologous blood transfusing, from the Italian Anti-Doping Tribunal. Essentially, that means Riccardo can’t race until he’s 40. The guy such a goof-ball that I’d wouldn’t bet against him doing just that.

I don’t understand the doping sanctions anymore. Ricco gets 12 years for his 2nd positive. (He only served 20 months for his first EPO positive, after winning two stages of the Tour de France.) What did Tyler Hamilton get, 8 years? And Dewey gets a lifetime ban? I don’t get it. And I don’t have enough energy to try to figure it out. It seems wrong and disjointed. But, such is the way with most sanctions in life.

Anyway, the system finally, sort of worked. I’ve said it here before and I’ll say it again-the whole doping control process needs to be completely revamped. From the testing to the method for sanctioning. And, of course, the sanctioning penalties of course. It is a broken system that is not doing much to deter the practice. 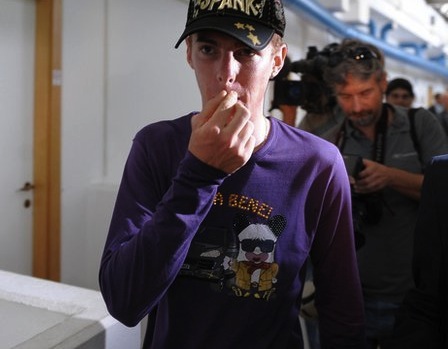 I'd bet it is not the last we see of Riccardo Ricco.

10 thoughts on “Did the Cobra meet his Honey Badger?”