I’ve been thinking about how much time is “necessary” at day on the computer. The internet definitely makes some things in my life much easier. I use it to research just about anything that I need to gather knowledge on. But the extra time, the “TV” time as it could be referred to, is what I’m worried about. It is so easy blowing an hour on the computer with no long term benefits.

I hardly ever read the newspapers that come to our house anymore. Most of the time, the news is 12 hours old and I’ve already heard about it through NPR or on the internet. I can completely understand why most newspapers are in dire financial troubles. It is a dying breed.

I saw on a video on the Wall Street Journal’s Digits, that Proctor and Gamble have limited internet use for its 129,000 employees. Mainly Pandora radio, Youtube and Netflix. I can’t imagine owning a company that allows the streaming of Netflix movies. They obviously think it’s a big problem. It must be, because adding the amount of time people are spending on Facebook, along to streaming movies at work, I’d think the productivity of most employees have been reduced dramatically.

I’ll eventually get the whole thing figured out. It is hard to try to come to terms on what is quality computer time and what is filler. 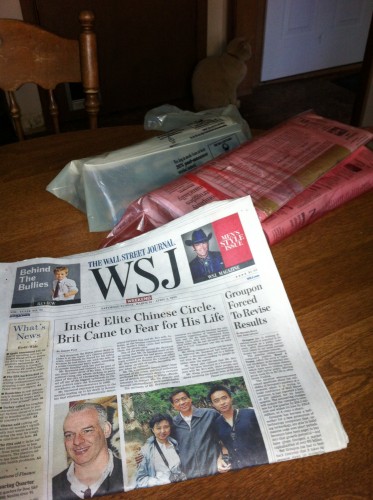 I usually read some of the WSJ, but a lot of the other times, the paper never leaves its bag.