Yesterday I was driving down the interstate and was thinking about the value of things and how much work people were willing to do to attain those very things. What got me started on the subject was that I was amazed at the number of pretty expensive automobiles that I saw. I was looking at the drivers of these cars and they didn’t look like wealthy people, just normal people. I probably don’t have the ability to really know that by just looking, but that it how it seemed. Anyway, I was thinking that most of these people have decided at one point in their lives that they need a good job and have to work 2200 hours a year so they can afford these things.

Anyway, I started thinking about the value of money and what it “used” to be worth/or what it bought, and what it buys now. And what I’d do or what others do to attain that money. And the mentality it takes to do it.

When I was 19, I was sitting at home in Topeka, when Tom Chew, a friend from Pittsburg, PA, came driving through town with his father. He was heading out early to the Red Zinger Bicycle Classic (Coor’s Classic). They stopped at my house and asked me if I wanted to go with them. They were heading up to Aspen for a week and then they didn’t know. It was close to 3 weeks before the race. I thought it was a great idea, but really didn’t know anything about acclimating at the time. Anyway, I found a journal I had back then and it has written in it that I left with $71. That was for three weeks before the race, plus the race, plus I was going to the Nationals in Bisbee Arizona after the race.

I ran out of money a few days before the race when I was staying in Denver, but got pretty lucky when I rode to Boulder for the team presentations in front of the Hotel Boulderado, when I was asked to to do an exposition roller race with 3 other guys, Thomas Prehn, Dale Stetina and I can’t remember the last guy. Anyway, everyone was getting paid. $100 to win, then $75, $50, and $25. They asked me because I was the only other rider there with a bike, since I’d ridden there. I was stoked. I was going to win at least $25.

I’d raced a million roller races. They used to hold roller races all winter at the student union at the KU campus. Al Kreitler was just down the rode in Ottawa. Anyway, I won the race. By miles. I was spinning 200 rpm’s when they said go and the other guys were doing 80. It was no contest. So, I had $100.

When I was riding back to Denver, on Hwy. 36, I noticed some change on the shoulder, so I stopped. There was lots of change. I still don’t know how it got there, but there was change spread all over. I walked along the shoulder for a long time and collected close to $50. My jersey pockets were full. I rode straight to the grocery store and bought a ton of food.

I was riding a composite team sponsored by Anchor Steam beer at the race. There was a crazy hard stage in Snowmass that went up Suicide Hill, a probably 20+% grade. And we rode 30 something laps. It was maybe the hardest raced I’ve ever done. Some Colombian and Boyer went around and killed everyone. I just got lapped the final time and finished pretty good, I’m not exactly sure, but I’m thinking 5-15.

Fast forward to after the Red Zinger, my brother and I are staying in Aspen with a friend. We have no money, once again. There is this bike enthusiast that has a commercial construction project and he asked if we want to work for a few days moving concrete. We say sure. They’d poured the floor of a building, but they forgot some plumbing or electrical or something and had to go in with one of those big wrecking balls and break the floor out. The guy bought us some picks and shovels and we were supposed to move the broken up concrete out of the foundation. It was super hard work, but we thought the money was good.

We were kind of getting into the flow of things by the 3rd day, but were pretty beat. I’d just finished a stage race and Kris had been camping out and following the race, so he wasn’t much fresher than I. The guy hired us came by one lunch and started talking about the Suicide Hill race. I thought he was going to say something about how well I did. Instead he started talking about Alan McCormick. Alan was the crowd favorite at lots of the criteriums. But, in Snowmass, Alan completely fell apart. He was laying up at the top of the climb and the announcer, Brian Drebber I think, started raising a prime to get Alan to ride the last lap. I think they got up to something like $500 for Alan to just ride the lap. After the race I remember thinking how crazy that was. Anyway, this guy said he had given $300 to Alan for that.

That was pretty much it for us working. The money instantly didn’t seem so good. When the guy left, Kris and I talked about it for a little while and decided that it was completely unfair to be breaking up concrete and hauling it all day for $40 each when the guy had given Alan $300 to ride just one lap of a race that I’d lapped him in. I’m not sure if it was the principle or what, but somehow the good money that we were getting paid became not-so-good money by hearing just one story. So, we went over that afternoon and told him we had to quit. He understood and gave us what he owed us. It was enough to get us to Bisbee, a week long hike in the Grand Canyon and over to Manhattan Beach, CA to race.

I’m not sure where I was going with this exactly. I guess it is that sometimes it amazes me what people will do to have stuff and not have free time. It also amazes me how hard some person will work for virtually nothing. They are doing a bunch of road construction in Topeka and I see those guys on there knees, troweling the concrete and I think that there is no amount of money you could pay me to do that on a daily basis.

Bike racing is a very hard way to make money. Super hard. Even if you get to the highest paid riders in Europe, it is silly money compared to what athletes from American sports make. So, I’d like to believe that most professional bike racers do it for the love of the sport. I’m racing the Hell’s Kitchen Road Race on Sunday in Fayetteville Arkansas. It is $40 to enter and $150 to win. It’s a pretty hard way to make any money. But, that has nothing to do with it. 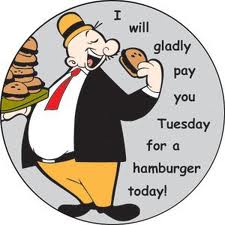 10 thoughts on “The Value of Money”