There is more than riding a bicycle fast to be a good bike racer. I think that is one of the many problems that our sport has right at this moment. There are a lot of guys that are professional right now that never learned how to race bikes, even though they have the genetics to ride bikes fast.

Learning to race bikes is a long process, even for super smart guys. Some riders never, never get it. Some guys that get it, miss it a lot of the time. That is one of the most interesting aspects of the sport. You never know what is going to happen until everyone is across the finish line.

One reason I despised radios in the peleton is that it has the ability to make stupid bike racers, that are really strong, into robots. Robots being run by some ex-pro bike racer that is sitting in a automobile, watching the race on a TV that is mounted in his dashboard. And these guys in the car might or might not of been good riders and/or tacticians in their own right. It really doesn’t matter. I believe that part of the sport of cycling is that the participates themselves, make the decisions during the race.

Just because you can ride your bicycle fast doesn’t really matter if you don’t have the tactics to back up your strength. That becomes less important on super hard courses, but in general, tactics during a race, usually decide the outcome.

And the way you become a better bike racer is hang out with good bike racers. You do what they do and emulate what makes them good. That is one of the best reasons to go on group rides.

Group rides are very unique. It is one thing that the sport of cycling has that makes it much different than most all other sports. It allows athletes of different abilities to train together, for hours upon hours. This is mainly due to drafting. There are very few sports that have this awesome aspect.

You need to try to do what makes you a better rider, not necessarily a faster rider early on in your career. Or anytime in your career. You can become a faster rider by training. By doing those intervals and the things you need to do in Zone 2, 4 or 98, whatever. Train with power and do structured workouts after you become a good cyclist. But, don’t pass up the opportunities to become a better rider to make sure you do your workout.

Anyway, I urge all of us to try to become better riders. You need to live the sport, as much as your life allows. You need to show up on the group rides. And do the whole group rides. When you show up on a group ride, you have to be all in. If you’re only “supposed” to ride for 1 1/2 hours easy and the ride is going 3 hours hilly, then sit on, but do the ride. You’ll be amazed how much better of a cyclist you will become if you’re out riding with friends, and others, than riding your bike around by yourself, looking at your power and heart rate.

Here’s a blog post about group riding. I don’t necessary agree with everything here, but it has a lot of information that rings true. 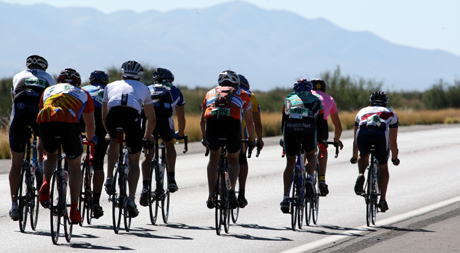 There is no better place to learn the art of riding a single or double echelon than on a local group ride.