When I first started racing, I don’t think I changed my cables once during the season. The cables were woven and we didn’t really address the shifting being precise because it was friction shifting and you had to adjust it manually.

Then STI index shifting became the norm and that is when the cable changing became common place. It is impossible to have good shifting with gummed up cables. But, with the 8 speed shifting, it still wasn’t something you had to do all that often.

Then I started racing MTB bikes full time. That is when the drastic amount of cable changing occurred. I would change cables at least once a week. All the cables, brake and derailleur. Sometimes I’d change them more, depending upon the conditions.

Gore Tex came out with cables then, back in the 90’s. I tried the Gore Tex cables for awhile, but it took way too long to change them, without the longevity advantage to justify it.

When the road shifting turned to 9, then 10, now 11 speed shifting, the cables have become more and more important. Shimano STI levers have a tendency to stress the cables at the cable end, by the shifter. If you use shitty cables, they break really quickly. I don’t know how many times I’ve been out riding with guys that have broken their right shifter cables and are stuck in their 11’s. My brother is the worst case. I’ve probably been riding with him at least a half a dozen times when his shifter cable breaks. He did it during the Bazaar Road Race one time I was in a break with him and he had to ride the whole race in his 11.

Anyway, changing cables now isn’t the super simple task it used to be. With the new SRAM and Shimano shifting, you have to remove your bar tape to change the shifter housing. I ride the Shimano 7800 levers on all my bikes, cross and road, mainly because the cables are exposed and easy to change.

Plus, a lot of bikes have internal cable routing now. My Trek Madonne has this and it is a hassle to string the cables through the frame. It is like fishing electrical wiring through a wall covered by drywall. And with this internal shifting, it is hard to stretch the cables properly to get the shifting correct. I’d never change my cables the morning of a race anymore. I don’t do it on Friday. I’ve never had any luck with the inline cable adjustors. They just seem to move when I’m racing, thus making the shifting horrible. The only adjustment I have on my cables is at the rear derailleur.

I’m thinking about trying the new Gore Tex cables again. I’ve heard that they are much better than their predecessors and make the shifting amazing. With the time it takes to change the cables, it is probably worth the extra hour spending installing the Gore cables if they last that much longer.

I used to look forward to changing the cables before each and every race, now it is just a hassle. I guess as the shifting improves and becomes more precise, the maintenance is going to follow. It’s about time to just go to Di2 eletronic shifting and just be done with all this sillyness. TRP is coming out with a new shifter for Di2 that allows the use of hydraulic disc brakes, so we, in theory could be done with changing all cables pretty soon. Wouldn’t that be nice? 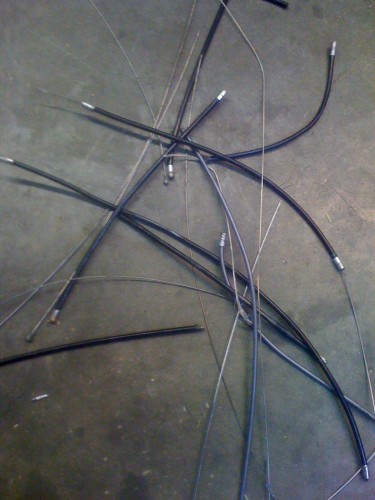 My garage floor after the deed. 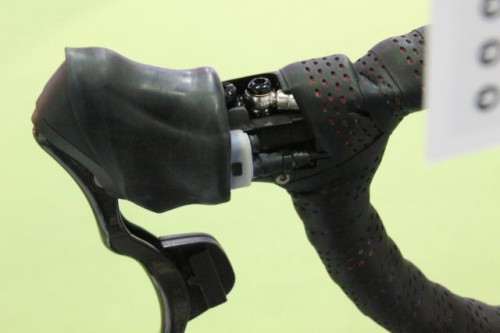 TRP's new shifter allowing the use of hydraulic brakes.

11 thoughts on “Changing Cables – What a Hassle”