But, if I could name one race that was a complete disaster on multiple levels it would be a World Cup MTB in Mt. Snow Vermont in the late 90’s.

If you’ve never raced Mt. Snow, you have to first know that the courses there tended to be beyond technical. Beyond technical because there was nearly always a few sections of off camber roots and rocks that were nearly impossible to descent without falling. And these sections were, more than not covered, with mud from natural springs or run off.

This World Cup day was beyond hot. Upper 90’s, lower 100’s. And muggy. The officials called all the riders into the start area, lined up by World Cup points. When everyone was accounted for, they announced that it was 10 minutes to go. Everyone, nearly simultaneously, started yelling, let’s go, let us start. We were all full of adrenaline, in direct sunlight, and way over heated.

Penny Davidson was working for ESPN TV. So, since it was 10 minutes, she came over and started interviewing everyone around me. Mostly Europeans. I listened as over and over again these guys said that it was not their weather and they didn’t think they were going to have a good race. All that did was motivate me. I could hear it in their voices that they were already defeated.

So, they blew off the gun and we started directly up a 2 1/2 mile ski access road climb. Super steep. I got a good start and realized instantly that I needed to ride a completely different pace that I would normally. Much slower. I kept passing guys and got to the top of the climb in the top 10. I headed into the woods to descend and cleaned the descent. I passed a few guys and was close to the top 5 starting up the climb the 2nd lap. I rode the climb in my granny gear and no one passed me. I passed two guys descending on the slick roots and came out at the bottom in 3rd. Climbing the 3rd time up the hill I was riding about as slow as I could stay on my bike. Granny, barely pedaling. I looked back and there was no one behind me. I couldn’t believe that I was going to finish top 3 in a World Cup when I was climbing just fast enough not to walk. I was thinking that there is no way I can ride slower up the hill and I was going to finish on the podium because no one was catching me. I got to the top and made it down through the dangerous section, totally stoked.

That is when it all went south. There was a small section where you traversed the ski hill in the open. A super fast section. I pinch flatted here. I didn’t panic too much initially, but when I got off my bike and pulled my tube and quickfil out of my pocket, there was no tire iron. I still didn’t panic, knowing I could use my skewer to remove the tire. But, there were lots of other things going on.

Two mainly. One, overwhelming heat. I thought I was hot racing, but I didn’t have a clue. When I stopped I thought I was going to explode. I was 10 X hotter than when I was moving. And two, there were biting flies everywhere. The kind that take chunks of skin off when they bite you.

My tire was covered with mud and I was having a hard time getting the bead off. Plus I was nearly passing out from the heat. And there were 100’s of flies biting me continuously. The worst were the ones in my eyes. Other guys started passing me when I was remounting my tire. The whole flat fix wasn’t super long, but it wasn’t my best. I got back on my bike and started riding again.

Only one lap to go and I headed back up the climb. I was destroyed. I don’t know if it was from getting so hot or just complete mental break down, but when I got to Trudi and she told me I was in 8th, I just stopped. Normally, I would have been super elated finishing 8th, it would have be close to the best result I had all season. But, that day it was a complete failure.

I’ve thought a lot of this race over the years. I nearly never quit bike races. I wish I had that split second back that I made the rash decision of quitting this one. I has haunted me since. Hopefully, all the thinking I’ve done, pondering the day, has made me a better athlete. Something good should come out of days like these. 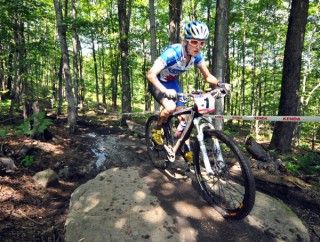 4 thoughts on “Mind over Matter”