I’m a little behind today. We need to take off and go road race in just a bit. It is weird how quickly the morning of race days goes.

Anyway, a couple days ago Bill and I found a squished iPhone on the road. It was pretty smunched. I put it in my pocket, figuring it was worth something. When I got back to Ann’s house, all of us had a discussion on if I put it on eBay, what it would bring. The guesses were anywhere from nothing to $45. So, I went ahead and listed the phone on eBay, saying it was a iPhone 4 or 4s and it was broken badly. Within 5 minutes someone emailed me and offered me $45. It has just escalated and this morning it was $150. The phone is really destroyed, but obviously people know way more about it that we do.

I’ve found some pretty weird stuff throughout the years. My brother, Kris, seems to find way more stuff than me. He found a broken iPad last year. Bill once found a router in a box, brand new. He found a camera last year, a really nice one, listed it on Craigslist in Lawrence and someone claimed it. It seems like a lot more people are leaving their phones, cameras, etc. on top of their cars nowadays and driving off.

The first year I came down to Austin, we were driving out to Pace Bend and Trudi saw some money blowing across the road. We stopped the car and there was a lot of bills blowing around. We picked them up and eventually found a wallet. So, when we got back from the race, I called the guy whose wallet it was. He came over to put it up and when I gave it to him, he accused me of stealing some of his money. We’d put all the money we found blowing around back in the wallet, but didn’t get it all I guess. He’d left it on top of his boat while he got gas driving out to Lake Travis. He was a prick, at least that day, never once saying thanks or anything.

One of the weirdest discoveries was when one time a group of us were riding MTB and someone broke their chain and we didn’t have a chain too. We were way out, without an easy way to get home. Then someone looked down on the ground and said, “hey, there’s a chain tool.” Laying at our feet was a chain tool. It was like god had thrown one down for us to use.

Big things are the worse to find. Last year I found a 2 foot long screw driver. I just put it on my handlebars and road home with it. I found a 3 foot pipe wrench once. I stashed it in the bushes and got it later.

Anyway, I think the discovering of lost stuff is just an added benefit from riding around on a bicycle. You never know what is out there. 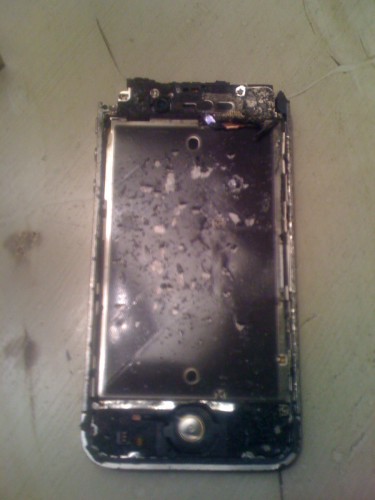 This is it, the million dollar phone. Pretty beat.