Yesterday was a nice day. But, I don’t know where it went, much like a lot of days for me. Since Monday was a bank holiday, yesterday really felt more like Monday than Tuesday, thus today really feels much more like Tuesday, not Wednesday. I’m 90% sure I’m heading down to Texas tomorrow to race this weekend. So, I only have today to do everything I need to do to be gone a couple weeks. I’m not sure how that is going to go. But, like I’ve written before, it is much easier getting ready to road race than most the other disciplines of the sport I participate in.

I went by the “rental” house that I got the 3 cars stolen from last year and picked up the trash laying around the bushes yesterday morning. It is amazing to me how much trash blows around in the winter in those neighborhoods. I rarely need to pick up any trash in my neighborhood. I wonder what the difference is? I don’t see a bunch of people walking around throwing their garbage on the ground. It just seems to blow in from the North and get lodged under the bushes. I can say for certain, from vast trash picking up experience, the number one piece of individual trash is plastic grocery bags. 2nd is anything with a McDonalds emblem on it. I guess people must go by McDonalds, get take out and then just throw the bag out their car windows. That is the only explanation for all the McDonalds bags, cups, etc. laying around for me to pick up. Because I’ve picked up a ton.

The back yard of this house is fenced. When the last people moved out, they left a car tire there. Now they seem to be multiplying. I have no way to explain this either. It’s like someone came by and said, “Hey, there’s a car tire. I should go get my extra tires and bring them over here to keep this one company.” I really don’t even understand the process of how the tires are here. But they are.

I’m kind of thinking of getting one of those infrared camera systems that has 6 cameras that can record up to 1000 hours, or some stupid number, and mount them all over the house, just to learn what goes on when I’m not around. I bet it would be super entertaining.

Last night, Keith Walberg came by and did an interview for a film he is making about Snake Alley. It took a long time for him to set up his lights and all the equipment, just for a few minutes of footage. He’s been filming there the last couple years, so I’m sure he has some good stuff. He is a professional.

Anyway, I’ve been feeling pretty good riding my bike. Good enough that I really don’t what to do anything else other than ride my bike. That makes accomplishing any of the 5000 jobs that I have to do around here nearly impossible to start. And most of my projects aren’t just hour projects, they are much bigger.

So, today, I’m going to get on my cross bike and ride to Lawrence and back on gravel. It is supposed to be in the upper 60’s, but really windy. Really windy by Kansas standards, which is super windy. The river road should be the easiest to try to stay out of that wind, but it is pretty impossible to hide from totally. Then I’m going to glue on another tire to race this weekend, pack up my stuff and by then it will be midnight and I have to leave in 6 hours. That is going to make for a short night, but that is normal.

Trudi is flying back to Europe for Pairs-Nice on Tuesday, so she is packing for two months. It might be a couple months before she knows what day of the week it is again. I have it easy compared to her. 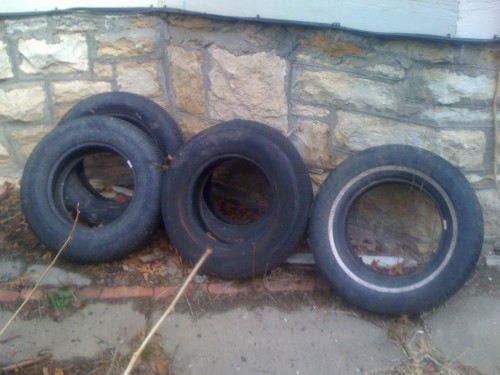 One tire has turned into 5. 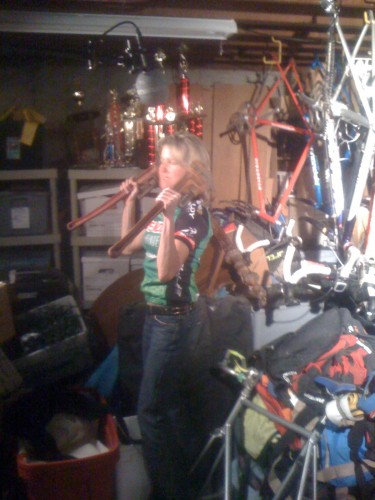 Catherine using pipe wrenches as weights while Keith is messing with his equipment. 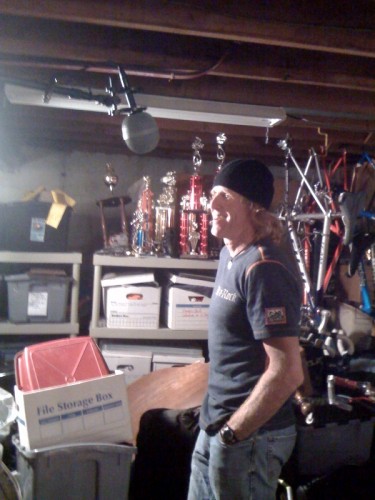 Doing an interview in the back of my basement was a first for me. 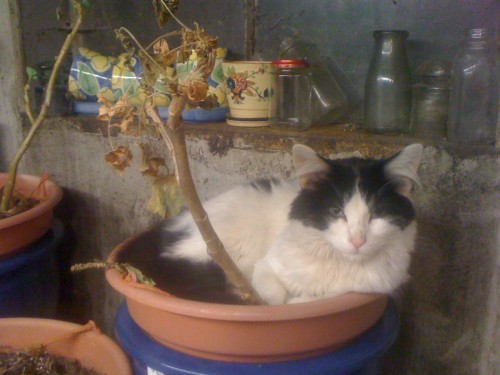 Fran, one of the kittens, that is now nearly a cat, was enjoying the commotion from a geranium pot, wintering in the basement. 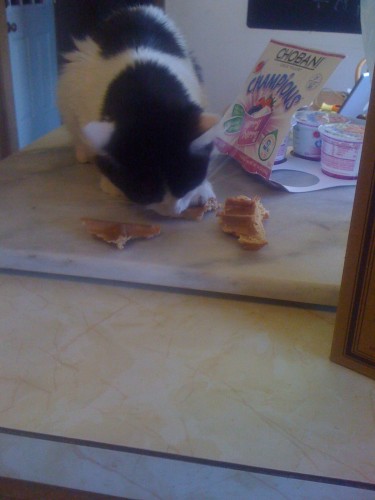 Fran also has taken a liking to waffles in the morning. I think it is because Bromont likes them so much and she likes Bromont.