Yesterday we went out for about 100km. I had hoped to ride 4 1/2 hours, but it wasn’t as warm as I’d hoped. And it was a little breezy. I’m not sure if it was because I hadn’t ridden in a week or that I’m kind of tired from riding hard for the last 3 days, but I wasn’t feeling as good as I have been.

We had a pretty good group that showed up. But, it is February form and there is a big extreme on fitness levels. That being the case, I ended up on the front end of the group for most of the way, which is fine by me normally. Yesterday I would have liked to sit on for the whole day.

Anyway, Trudi has been riding pretty consistently since she got back from Europe late last fall. She is just starting to get a resemblance of form back, just in time to head back to Europe again and not ride for months. But, she has a tenacity for staying on even when she doesn’t have the form. She has this technique of cherry picking the best draft. I don’t know where the saying came from, but it is now known as the Trudi spot on our rides. It doesn’t matter which direction the wind is from, she takes the middle, tucked in out of the wind. It is a very good survival trait.

I think that we should all look for the Trudi spot every once in a while. The closer it is to the end of a race and the harder it is going, the more important that spot is. That is the spot that the Pro teams are trying to create for their sprinters at the end of the race, the spot that keeps their guy out of harms way and comfortable, while using the least amount of energy. That spot is different at all times during the race, but we should all strive to at least recognize where the Trudi spot each and every race, or hard ride, and then try to attain that position when it is most important. I guarantee that your results will reflect the effort. 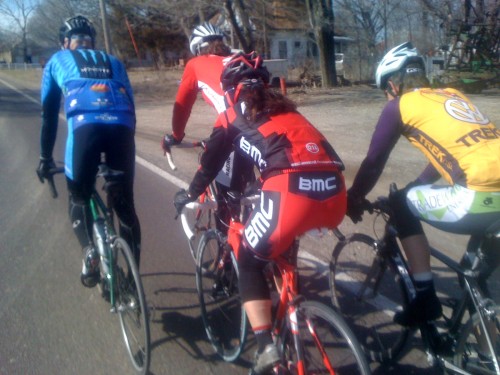 I'm sure Bill is stoked since the wind is blowing pretty hard from the right here.

8 thoughts on “The Trudi Spot”