I flew to San Diego yesterday. I was sort of behind schedule all this week from roofing, riding most of the daylight hours and a sundry of other things. I wasn’t flying until after 6 so I had all day to pack and get ready.

I went to the bank and deposited a check and the teller there needed to see my driver’s license and told me that my driver’s license was expiring next week. That threw a whole new twist in the day. I thought I would be at the driver’s license exam place all afternoon. I was pleasantly surprised that all I had to do was look into a scope to do a eye test and then give them $38 and it was done. I was in and out in less than 5 minutes.

So, I called Bill up and went for a couple hour ride. It was pretty windy still, but felt alright. Kind of sore from finishing up the roofing yesterday, but not so sore that I wasn’t pedaling round. I’m a little worried that today I’m going to go through the 2 day effect and feel like shit. Anyway, I got back home and had about an hour to get ready to go.

What amazed me was how easy it is to travel to a road race. I don’t know why, but I’d forgotten how easy racing on the road is. This is from an equipment, planning perspective. All I needed was my road bike, race wheels, bike bag, a couple water bottles.

I have to compare it to how much preparation and work it was to do any cyclo-cross weekend. Not even counting the countless hours in the garage making the bikes work correctly, but just the amount of stuff you need, just in case, is amazing. It is somewhat the same in MTB racing. Tires, extra tubes, quickfills, etc.

Riding for Wheaties Schwinn was the first time that I had a race bike and a training bike. Before then, there wasn’t a luggage fee for bikes, so it wasn’t much of a hassle to travel with a bike. We didn’t take much care in packing the bikes. They got crashed, repainted fairly often. Whenever there was a team van at the race, we wouldn’t have to bring a bike. But, lots of races, all the support flew too. So we had to bring our training bikes.

Our race weekends were pretty in and out. That was to get to the race as late as possible and leave on the first flight after. By the first flight after, I mean if the race finished at 4 pm, I’d get a flight at 5 or so. Back in those days, if I could get to most any airport 15 minutes before the flight, it was all good. That was with a completely assembled bike and a bike bag. I could get my bike into a bag and on its way down the conveyer belt in less than 2 minutes. Rear derailleur off, seat and seat post off, wheels beside the frame and zip. I still don’t quite understand why my bike wasn’t completely destroyed most every time I flew. But it was exactly the opposite. I think I’ve only had my bike dinged maybe twice my whole life. That is out of flying 100’s, if not 1000’s, of flights. Of course I’ve had a few wheels knocked out of true, but that isn’t such a problem usually.

I’ve flown with 3 bicycles in one bike bag. That is my record, 3 bikes and one extra set of race wheels. It was when I flew to a race weekend in Miami that did Coconut Grove and also a Gant MTB race the same weekend. I flew with both my bikes. Trudi raced the MTB race and all I did was lower the seat and that was it. The reach was pretty long, but that was how it went. She won the women’s Gant race and for that they gave her a new Fuji MTB. She’d won a bunch of these already and we didn’t have much of a problem selling them right after the race. This race we did. MTB racing hadn’t picked up in South Florida and the bike was small, so we had to bring it back. It was lucky I had some time to completely disassemble those bikes, because it took a while and it was tight. Plus, it probably weighed 100 lbs or so.

I wrap my tubes with plumber’s pipe wrap now. I don’t do much other than take the rear dropout off, seat/seat post and turn the handlebars under. I use an old Athalon bike bag from the Levis’ days. We put new beefy zipper in them a few years ago and they work great. I have no use for a hard case or soft cast with wheels. It is just too much weight and it takes too much time to pack the things to make it worth the while. I do have cut cardboard on the side to protect it some. You wouldn’t think it does much, but it does.

Anyway, what a refreshing day it was packing to go to a road race. And no, I didn’t forgot my helmet on the first trip of the year. 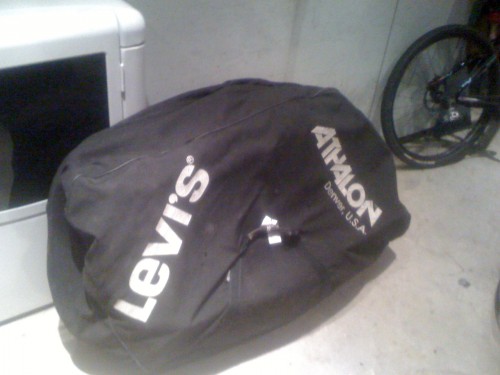 FInished package all safe and sound in La Jolla.

3 thoughts on “Packing to Race”