The Masters Nationals yesterday went pretty well. Pretty much like I had planned. The start was on pavement for the first 300 meters and I didn’t really have to go full out to hit the grass in the lead. The next minute or so is a slippery loop of a soccer field, then a U-turn and up the main climb of the race. I rode pretty easy around the field and up the start of the hill. The hill gets much steeper at the top and was greasy. So greasy that it was faster to run up a 20 meter section than stay on your bike. Out of the 5 laps, I rode it 3 times and jogged it twice.

Anyway, Kevin Hines passed me on the steep section, but over the top I put in a good surge and got a separation for the next downhill, which is pretty straight forward. That leads up to the rail road tie run up. I had a few seconds by then and used the next descent to rest up some. After going over the barriers and then by the pit, there is a tight section with a bunch of U-turns before a sand pit. There isn’t any place there to go fast, since it is so slick. There is one more short loop that goes by up the climb once again. I felt alright and knew I had a okay gap descending back to the pavement finishing the first lap.

I never really went full on and had a descent gap starting the climb the 2nd lap. I knew I was going to be able to put more time into Kevin again here. I looked back and 3rd was pretty much out of the picture already by this time. I think I might have run the steep pitch here, but anyway, when I went up the stair run up, the gap was much bigger.

The course was getting worse every lap, slicker and less predictable. The only thing that was going to cause me to loose a bunch of time was a huge error, crashing, ect. So I started riding a little more within myself. I was getting a ton of different times around the course. The time at the start/finish line seemed to be the least, but I gave it the most credibility for some reason, other than Trudi’s time on the other side of the course. So I thought the gap was growing and then shrinking the whole race, but it was really staying around 20-30 seconds. Whenever I heard a time under 20 seconds, I’d put in a hard effort to get back up to closer to 30. That was the reward for having the lead I guess.

On the last lap, I looked over and was heading up to the pit when Kevin was still riding around the field, so I knew I could ride pretty easy and still win the race. And that is pretty much what I did. I didn’t make any big mistakes all day, a lot of little ones though, and had an okay day riding.

I’d have to say the conditions didn’t really suit my riding abilities. Not that any course is really bad, but I’ve never been big on frozen mud with a layer of melted mud on top. I’d rather just be riding on frozen ground/ice or mud. I don’t really like the mixture.

Kevin rode a pretty good race I think. I didn’t talk to him afterwards, but he kept riding hard all the way to the finish. Since the gap to 3rd place was close to 4 minutes, I’m glad that we got to entertain the crowd there.

I’m kind of surprised how tired I was yesterday after the race. All afternoon I felt out of sorts. I have no idea what that was all about. Probably just being on my feet for so many hours on Thursday and then getting up early and out the door at the crack of dawn. Whatever the case, I felt much better after eating dinner last night.

The Lees-Mcrae Cycling team were eating at the Italian restaurant we were at. It was fun listening to their anticipation and conversations of their thoughts about their upcoming races. Refreshing. The sun sets so early here, 4:30, that it seems really late when it is only 8 pm.

Bill is racing at 10 am this morning, then he and Catherine are driving back to Kansas. I’m going to ride today and then go back to Delavan and get my clothes and bikes clean and working. I’m going to wait to see how I feel before deciding about racing tomorrow. I can’t decide whether I’d be more wasted racing or watching the Elite race. It’s hard getting motivated for that race right now, but maybe that will change soon. I’m looking to be going fast next weekend in Louisville and have to make a good decision here on Sunday. Hopefully that answer will become apparent on it’s own. 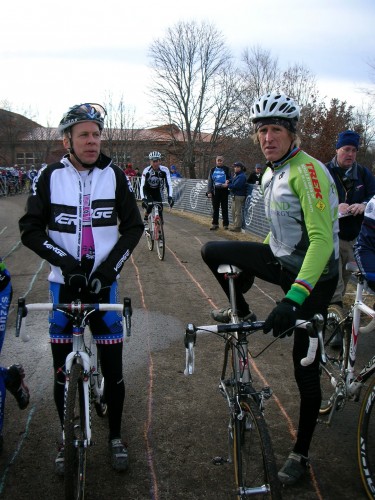 At the start with Kevin Hines. 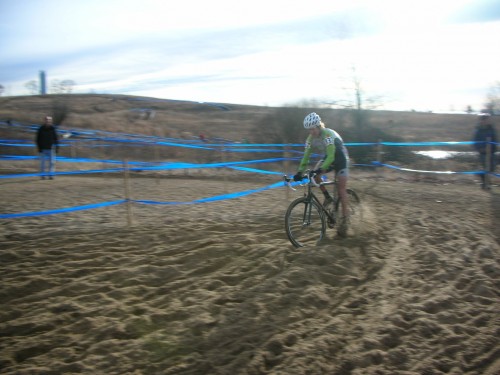 Riding through the sandpit on the first lap. 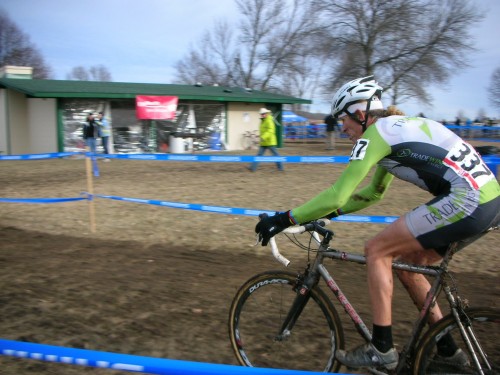 It was so greasy that you had to get way back over your rear wheel even on the slightest uphills. 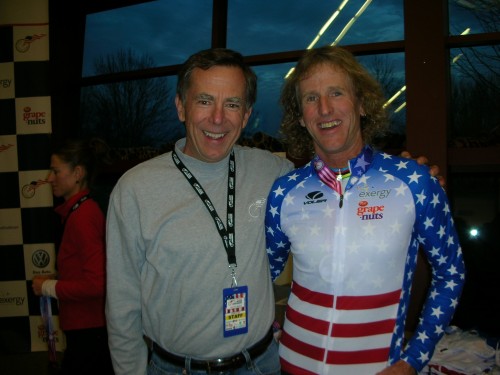 With USAC's CEO Steve Johnson after the awards ceremony.