We got to Madison a little after noon yesterday and got in just a couple laps of the course. I was so surprised that everything is completely frozen hard. Really hard. Everything but the course, which is frozen medium, with 1/2 inch or more of mud and grass on top. I really can’t predict how the course is going to be on the weekend, but it is changing up hour to hour during the day.

I’m going over to the course right now, at 8:30 am to preride the course at 9 am, which is when I race tomorrow morning. I think it is going to be frozen hard completely today, since it was in the lower 20’s last night. It might be a waste of time because I think the low tonight is only supposed to be in around 34, so the course most likely won’t freeze hard. Whatever the temperatures, it is going to be slick.

The course is really wide open most of the time with a pretty substantial climb that you go up twice. I felt pretty good again yesterday, so that’s a good sign. The run up is pretty long with an off camber remount at the top. I’m going to ride the Dugast Rhinos today. Yesterday I rode the FMB tires and they seemed to work pretty good. I’m going to ride a little harder pressure because after you get through the mud, you get down to real hard, sometimes, sharp ground.

Catherine is racing at 11:30 this morning, so I’m going to ride a couple laps with her after she gets over to the course and then change into warm clothes to help out/spectate. Bill doesn’t race until Saturday. I’m going to try not to stand around at the venue too much the next few days, but I know how that goes.

I guess there are 103 Elite guys registered for Sunday. That should make for an interesting start for everyone with no UCI points. Even for the guys with UCI points. Trebon is going to be going so fast at the start that there are going to be guys that are -5 or -6 laps, with the 80% rule in force. I would say my chances of riding the complete distance is very slim. I hate it, but that is how it is scored now.

My bike was pretty gummed up after only riding two laps. I was having some issues clipping back in after walking up the run up. I can count on one hand how many times I’ve had any trouble getting back into XTR pedals. And always before it is a situation where there is wet mud, but the air temperature is way below 32 degrees, making frozen mud on the bottom of the shoes.

Talk about a muddy situation, how about Valverde coming back to the sport and saying that he has a “clear conscience” and that he felt cheated because they matched his “DNA in that country without my presence.” I don’t thing he could have done much to help those guys do his DNA test. And I don’t think a DNA test is very complicated. Neither did WADA or CAS. I guess it was a big conspiracy against him since he was slaughtering everyone so badly. Well, he’s been training hard during the timeout the last 18 months and can restart slaughtering everyone once again.

Okay, time to go get cold and muddy. It’s a pretty harsh way to start out the day. I hate this early morning, winter bike racing stuff. 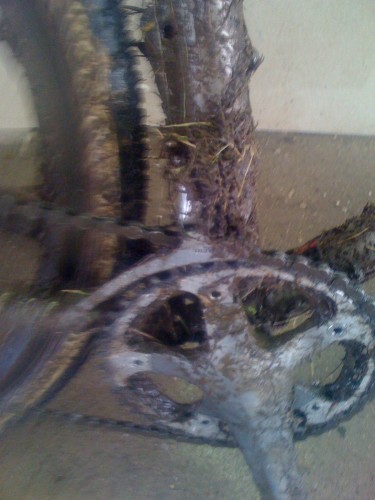 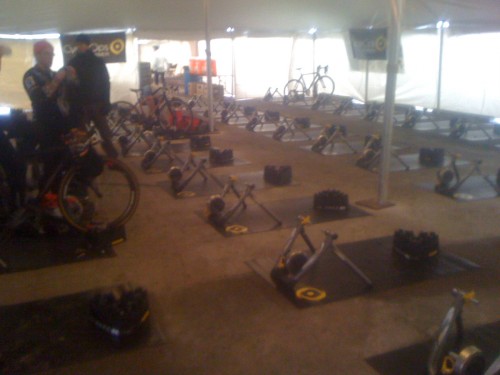 The trainer tent. It's going to be fun to see when it fills up. 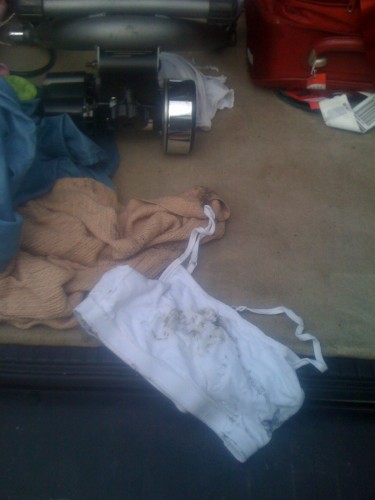 A bike rag I spotted in the back of Catherine's car. 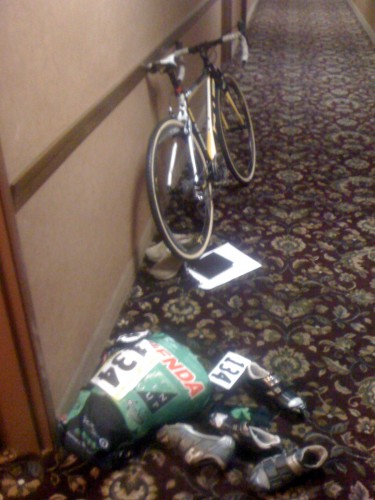 Catherine moved her yard sale out to the hallway last night.