I don’t really spend any time going to blogs. I’m actually trying, somewhat successful, to limit my time on the computer. But, it constantly amazes me the little weird surprises that happen because I write this.

This last week, twice, I’ve had strange encounters. Well, one was really strange to me, one just surprised me.

The really strange one was that when I drove back from the airport on the way back from Tulsa, we stopped at Freestate Brewery for dinner. When I was leaving the place, there is an outdoor area, railed off, in the front, so people can sit outside, smoke and drink beer. There weren’t many people out there at 9 at night, kind of cold, but there were a couple guys that, pretty much, from their outward appearance, seemed like homeless type. Pretty scruffy, army jackets, long beards, weathered, kind of like I look on some rough days. Anyway, this one guy looks up and smiles big and says, “Hey Steve, how’s it going?” I would have bet you a million dollars that I didn’t know the guy. And that he didn’t know me. I still don’t know him. It’s going to haunt me for awhile.

Yesterday, at the Flying Monkey coffeeshop in Topeka, I was leaving and this guy, with a bike rack on his roof, drives in and sticks his hand out the window of his car as I’m leaving. I’m driving my van. He says, “You’re Tilford right? I came here only because I read about it on your blog.” That didn’t seem so strange, but for him to recognize me leaving in my van seemed a little much.

Then, last year, at Starbucks in Topeka, a guy came over and asked if I was Steve Tilford. I said yes. He said that he used to race bikes 15 years ago and had lived in Tulsa since then. He said that he stumbled upon my blog a few months earlier and read it religiously. I asked him if he rode at all and he said no. I thought it was a little strange that he was reading my blog and not riding bikes. We talked a bit, but he was heading back to Tulsa. We walked out together and he asked me if that was the van that I bought the new wheels for in Philadelphia. That was over 5 months earlier and I’d just put a picture of that during the drive to Battenkill. Man, did that guy have a memory. Kind of scary.

I get lots of emails too. I’m not sure if they are weird or just interesting. That is nearly the same to me.

Anyway, all this is strange to me, in a nice way. It never ends to surprise me to what people latch onto and what makes them tick. I think I’m writing about something totally mundane, except to me, and there are 20 comments on the very subject that was just a silly thought in my mind.

All this stuff is the enough reason in itself to do this. I don’t write. It (writing) and the ancillary subjects in school were, by far, my worst subjects. By miles. I find it strange, on its own, that I do this each day and don’t dread it. Voluntarily. I could have never imaged even just a few years ago.

Okay. I’m driving to Chicago for three days now. I’m taking a lot of cold weather stuff to ride in. Not that it’s going to be much colder than Kansas the next few days. 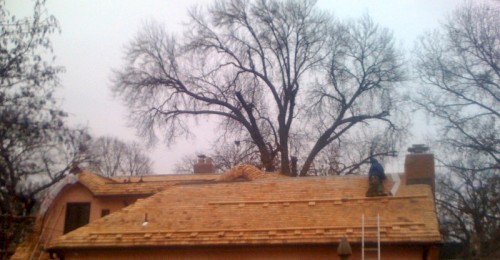 Totally not on subject, I saw these guys roofing the house behind the house I was pumping water out of the basement of yesterday. They are redoing a roof that they did just a couple years ago. Hail. I asked them if that was really needed and they said no, but the stupid insurance guy said it needed to be done. How screwed up is that. This is a very expensive roof. Anyway, there aren’t many people in the US that do this nowadays. They are saturating the shingles with water, steaming them and then applying them while they are malleable. Pretty artistic. 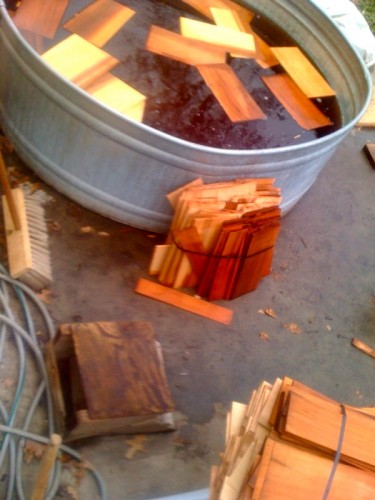 Soaking the cedar before steaming. 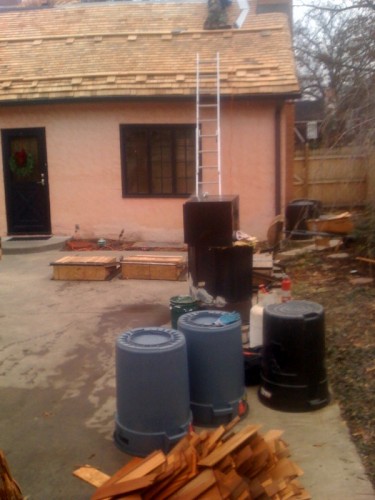 The square thing steams the shingles before they apply them.